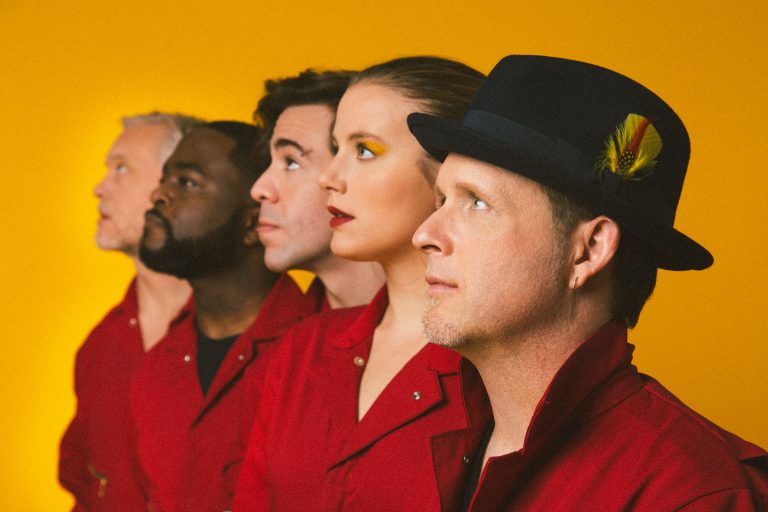 The ever-bombastic Nation Beat are back with another instalment of New Orleans meets north-eastern Brazilian sorcery. With percussion maestro Scott Kettner leading from the drum stool, the group seek to combine the spirit, rhythms and energy of mardi gras and Brazil’s north-eastern carnivals (here’s looking at you Olinda). It’s over 10 years since their debut album and it’s fair to say that they’re now at a point where it’s impossible to notice the seams, the cultures of these two regions being so imperceptibly mingled.

That is certainly the case on “Forró de Dois Amigos”, the lead track from their upcoming album The Royal Chase. As the name suggests, this one is a forró, originally performed by Edmilson de Pífano on cane flute with accompanying accordion and percussion. In Nation Beat’s version the drum groove takes in elements of New Orleans and north-east Brazil while the original flute melody is given extra, and we mean substantially extra, oomph in the brass that lead the track.

The track begins with the voice of Irving ‘Honey’ Banister, a Mardi Gras Indian who sings in the group Cha Wa. Here’s Nation Beat’s Scott Kettner to give the context to that intro, and how it relates to the album they’re soon to release:

“[Irving ‘Honey’ Banister] discusses the metaphor of sewing an Indian suit, the process of working to keep his culture alive and the dismay that younger generations are not keeping the flame burning due to their lack of discipline and focus. They don’t have time to sew with their faces in their cellphones and other distractions.

This is really the overriding theme for the album. Every day, we wake up with a mission to accomplish many personal goals. Some of them are small and easy to attain while others are big picture goals that take years and maybe even a lifetime to accomplish, but they require discipline and focus. These big goals, which seem to stay just a little bit in front of us, as we continue running after them is what I call THE ROYAL CHASE. It’s that thing burning inside, driving us to do what we love simply because it’s what we’re put on Earth to do. I believe all of us have an internal Royal Chase – if we listen internally and focus, we know our mission, our goal, and we get running after it but is just out of reach. It’s The Royal Chase that gets us out of bed every day!”

You can listen to “Forró de Dois Amigos” right now:

Nation Beat’s Scott Kettner is also doing a weekly live stream every Tuesday night on his Facebook at 8pm ET, playing some new music and getting us all into The Royal Chase spirit.