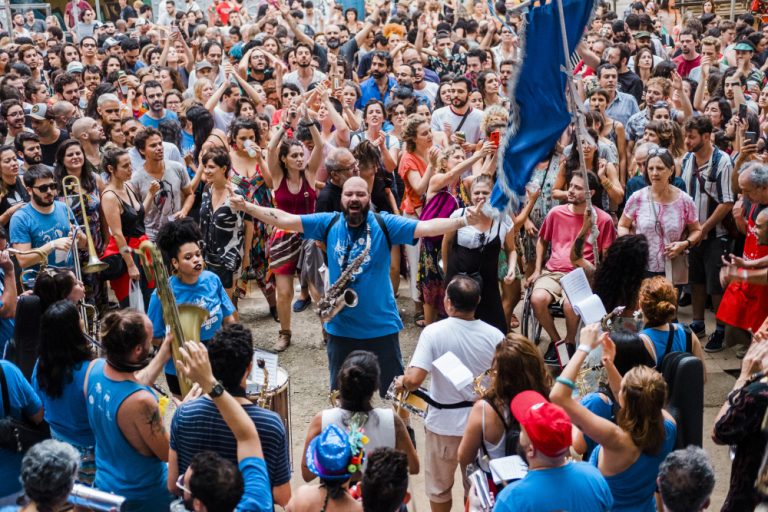 In 2013, Brazilian saxophonist Thiago França took a sidestep from his work as a founding member of Metá-Metá (and one of the most in-demand horn players in São Paulo) to start a project that united his love for instrumental samba, carnival and the brass and percussion charanga bands he grew up listening to at his local football team, Atletico Mineiro. The result was A Espetacular Charanga do França, an almighty carnival collective that has become one of the most beloved blocos at São Paulo’s street carnival.

With the raw, visceral power of horns and percussion, the group play a mixture of sambas, cumbias and marchas, with a drop of Balkan revelry, Ethiopian melodicism, baile funk bomp and even a little disco dotted in here and there for good measure. A close to 100-strong unit when they’re parading São Paulo’s streets, the group have pared down the instruments, though not the energy and power, across a series of albums and EPs since forming. Some of the stand-out tracks from these releases, as well as a couple of brand new tracks, are now set to be released on a brand new compilation from Mais Um titled The Importance Of Being Espetacular.

The first single will feature one of their new tracks, a blustery take on Michael Jackson’s “Don’t Stop ‘Til You Get Enough”, retitled “Não Para”, and a track written especially for the group by Lucas Santtana, who takes vocal duties on the track. Here’s Lucas to explain how the song came about:

“One night I dreamt of this whole melody. I woke up and called Thiago França. I knew it was a carnival song and I wanted Charanga to record [it]. The lyrics talk about real people who have to do with the history of Charanga, such as Talitha, owner of the restaurant Conceição Discos, a kind of bloco headquarters; Juçara Marçal, friend and member of Metá Metá; and Thiago himself. It is also a reclaim to the mayor of the city at time who preached that São Paulo had to accelerate and increase the speed limit of cars on the streets. This was increasing the number of traffic deaths and so I talk in music about slowing down (desacelera). Last but not least, the title ‘Vem Desacatar’ (Here to Defy) is a tribute to blocos like the Charanga that understand the political and historical side of carnival.”

“Não Para” and “Vem Desacatar” will be released by Mais Um on August 18. The Importance Of Being Espetacular (vinyl/CD/digital) will follow on October 1. Pre-orders from Bandcamp.