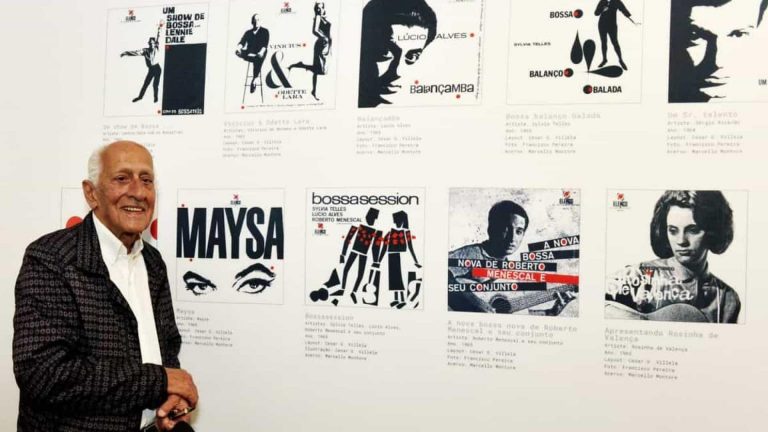 Former journalist and self-taught illustrator César Villela died on Friday 11th December of pneumonia. He was 90. Villela is known for his design of bossa nova record covers, especially for artists such as João Gilberto, Baden Powell, and the first 16 releases on the Elenco label.

Often referred to as the Brazilian Reid Miles, César Villela created the visual identity that accompanied the sounds of bossa nova. Like Blue Note, you could easily recognise and buy any record from the Elenco label you came across, and know that the quality of the art was guaranteed.

César’s legacy is linked to bossa nova’s history from the release of the landmark LP, Chega de Saudade, João Gilberto’s 1959 debut album, on Odeon. The cover design filled the need of this new music for a visual identity that represented its modern posture.

Villela was also signed on to work on the Brazilian versions of Canadian philosopher Marshall McLuhan’s books. When working on The Gutenberg Galaxy he came across the McLuhan thought that “the excess of details in an image are visual noise”, which inspired his graphic conception from then on.

On Gilberto’s second album, O Amor, O Sorriso E A Flor (1960), his abstract monochromatic signature style can be seen for the first time, a theme he continues on a self-titled 1962 album of compositions by samba legend Noel Rosa, which would be his last work for Odeon.

That year, due to Odeon’s lack of interest in bossa nova, its musical director, Aloysio De Oliveira decided to leave and create his own label, Elenco, for which he invited César. With photographs by Francisco Pereira put on high contrast, his ‘simplified’ artwork became a trademark of the label, and also for the style in general.

Baden Powell, Roberto Menescal, Vinicius de Moraes, Nara Leão, Lennie Dale, among others, strangely (but not surprisingly), couldn’t find space in the major labels at a time that their sound represented the optimism that hovered in Brazil. Elenco played an important role in Brazilian music by releasing these artists, and their covers followed this creative vision, making it a contemporary of some of the greatest jazz labels of the time.