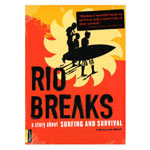 It’s inevitable that Rio Breaks will always be deemed a surf documentary, yet surfing is clearly playing second fiddle throughout. The story follows Fabio and Naama, two kids from the Pavao favela in Rio, as they head to the beach each day with hopes of competing in a surf competition, winning sponsorship and finding a way out of Pavao, a favela nicknamed Vietnam due to the number of shootings that occur. It’s also the story of Rio Surf Club, a group set up by a number of former Rio surf champions who are trying to show the kids from the favelas that there is an alternative to drug trafficking. In exchange for surf lessons and board rental they ask that the kids attend school and don’t get involved in the drug trade.

By looking at the insular world of surfing at Ipanema, or the Arpoador stone to be exact, the film shows just how hard it is not to be involved in the drug trade when you’re from the hills (another name for being from the favelas due to their uphill location). Every interviewee has one brother, sister, cousin, uncle or parent who has been killed or seriously injured in the favelas. A few of these were just in the wrong place at the right time, and perhaps the most heartbreaking, but many became involved in drug trafficking and were either shot by the police or a rival gang. We get to hear the stories of many surfers who could have made it to the big time but unfortunately got distracted by their surroundings. It’s far tougher to make money from sponsorship than as a trafficker. It’s this life that Fabio and Naama are trying to skip.

The film follows the two youngsters as they slowly try to improve their surf skills until eventually Fabio decides to compete. For some inexplicable reason he wasn’t ready to enter the water when it came to his turn so only has a couple of minutes to impress the judges, and he ultimately doesn’t make it through the heats. In the following days and weeks he fails to return to the beach, with everyone fearing the worst, that he has become involved in illegal goings-ons, exactly what Rio Surf Club tried so hard to prevent.

The reality is that to be a professional surfer and one who is able to get sponsorship you have to pretty good, and although both Fabio and Naama surf every day they are always not quite good enough, and what it all boils down to is family life. Fabio, with his father a casualty of the drug trade, and a mother who has disappeared, was always the more likely to fall into the trap of drug trafficking, and while there is nothing to suggest that this is the case there is concern that there is an increased chance of this happening now that he has left the surf club. Naama, on the other hand, simply decided not to compete in the end yet throughout the film had a better outlook on life due to having a close family, an outlook which will surely stand him in good stead.

It’s hard to watch this film without getting tangled up in the lives of these two. From the start it’s clear that Naama has his head on his shoulders while Fabio is something of a loose cannon, and this is exactly how the film pans out, despite everyone trying their best to help Fabio out. What more could have been done? It seems little as even the support network of the Rio Surf Club is never a replacement for an actual family. The glory of Rio Breaks lies in its humanisation of favela life. Through the members of the clubs, and especially the two kids, we get to see the worries, the pain, the dreams and the tough decisions that go with living in the favela, but we also get to see the human face. When kids as young as 13 are given the option of joining the traffickers and earning money it is easy to understand the despair that people feel but amazing to see their resolve as they try and help one kid at a time live a better life.

Rio Breaks is being released in the UK by Mr Bongo Films on 3rd October. You can buy the DVD from Amazon.