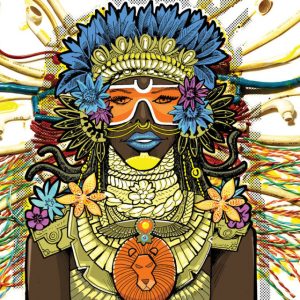 The group’s sound is founded in Afro-Futurism, blending rap, reggae, samba, dub, and references from Afro-Brazilian religions. This is the sonic stage set for former taekwondo fighter Diogo Silva (gold medalist at the 2007 Pan American Games), MC Sombra, Minari and Junião to address controversial issues that have permeated Brazil in its 519 years of existence. From the near extermination of the Indian population, 300 years of (unrepaired) slavery, and into the current disturbing reality, permeated by oppression, violence, racial discrimination, fraud, fake news and ideological impositions, all disguised as being on the right side of morality.

“The words refer to how we respond to certain information and how fragile we have become in interpreting it. [You have to] understand that corruption is ambidextrous, it has no side and is older than Brazil. The country has to be violent in order for someone to sell security and that’s what we talk about: old practices that are given new clothes with new characters, ” says Diogo.

This critical tone is softened by the percussion-laden danceable qualities of the tracks, much influenced by candomblé, which act as a counterpoint to show the two realities of Brazilianness: the structural problems, which are rooted in culture, and the brilliant diversity of sounds produced by the influence of different peoples, mostly from the African diaspora.

The main purpose of Represença is to alert the public about the easy solutions that are constantly promised. “First question, then reflect, and then question again,” they say. “We cannot afford to ignore the social and political, we live in a time where it is increasingly important to get involved and this is reflected in our work”.