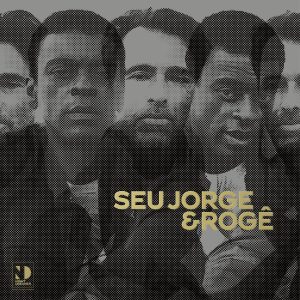 What happens when two decades-old friends get together for a chat, to try out some riffs and have a jam? Seu Jorge and Rogê’s first collaborative album, celebrating a 25-year span that has taken them from the temperate climes of Rio de Janeiro, via the US (where they both now live), to a small recording studio in the Netherlands is just that.

Seu Jorge rose to instant fame, his debut solo album in 2001, Samba Esporte Fino (released internationally as Carolina, after the album’s most loved song) propelled him to a household name in Brazil, though it’s fair to say he didn’t hit the international mainstream until an acting [singing?] role in Wes Anderson’s A Life Aquatic with Steve Zissou in 2004 where Jorge captured the hearts of all with his soulful, Portuguese-language covers of David Bowie classics. Since then Jorge has has released sporadic albums, played international tours singing Bowie covers, acted in numerous films, and even collaborated on clothing lines.

A self-taught musician with a theatrical background, Jorge has stayed close to Rogê, an important proponent of Rio’s new samba movement, throughout his entire career. In fact, Rogê was one of the core members of Seu Jorge’s band on his Músicas Para Churrasco albums of laid-back backyard samba. Yet, it seems only fitting that the pair have finally collaborated on an album which sees them both take equal billing, a celebration of their 25 years of friendship.

Opening the album, “Sarava” is easy listening, funky and super-smooth listening. This entire collection stems from years of unrealised songs, ideas and refrains dreamt up and finally being put to good use as the foundations for this session. Skip to the song “Caminhão”, conceived by the pair in a Rio bar some 25 years ago and you could almost be there nursing a drink, with a warm breeze playing around your ankles. The talent from these two friends symbolizes their roots and a deep bond that goes far beyond their musical careers. The intimate “Pra Você Amigo” translates simply and poignantly as “For You, Friend”. The fourth track on the album, it’s an endearing nod to their relationship. In case you were after a more traditional samba track, then “Onda Carioca” does not disappoint – finishing off the album with the refrains and much-loved beats that Jorge is famed for.

Night Dreamer Direct​-​To​-​Disc Sessions, which is the title of a series of live sessions pressed straight to vinyl [an album by Seun Kuti & Egypt 80 was the first release], serendipitously proves a fitting title for this collection of tracks, dreamt up between two musicians whose talents and love of their roots have finally translated into an album that firmly cements their position as leaders of the MPB movement – plus, its not everyday you get to record an album with your best friend.

Seu Jorge & Rogê’s Night Dreamer Direct​-​To​-​Disc Sessions is available on vinyl from Bandcamp and digitally from Spotify and other streaming services.