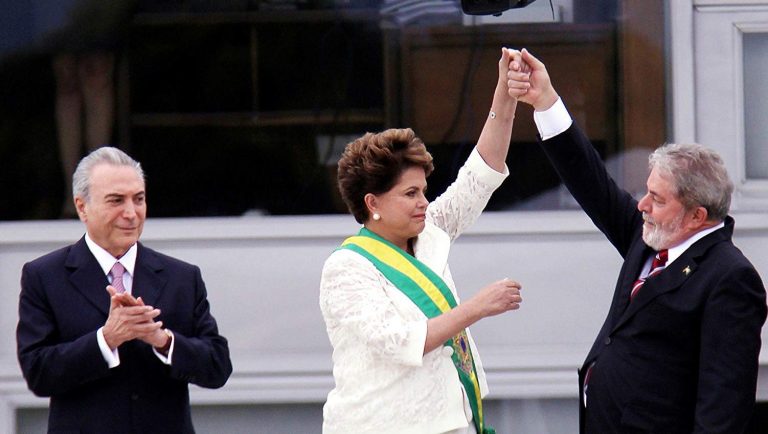 The Personal and the Political: Essential Brazilian Documentaries by Petra Costa and Maria Augusta Ramos

Petra Costa’s dreamlike, semi-autobiographical films The Edge of Democracy, Elena and Undertow Eyes contain a mixture of highly personal themes and highly-charged politics. Maria Augusta Ramos’ The Trial takes an even deeper dive into the Kafkaesque drama of the impeachment of Brazil’s first female president.

“Here we are, with one president impeached, another in prison, and the nation moving rapidly towards its authoritarian past. I fear our democracy was nothing but a short-lived dream.” [voiceover: The Edge of Democracy]

The Edge of Democracy (2019) is an essential overview for any viewers interested in understanding how Brazil got from Lula to Bolsonaro. Costa’s Oscar-nominated and award-winning documentary was praised by Wim Wenders and Spike Lee among others and was hotly-debated in Brazil.

The film is well-suited towards foreign audiences, with an initial ‘crash-course’ in Brazilian history which explains how a history of slavery, colonialism and dictatorship set the scene for the removal of Dilma Rouseff – former guerrilla fighter and later Brazil’s first female president – in 2016 and the imprisonment of Lula Ignacio da Silva, then frontrunner in the 2018 presidential elections, paving the way for Jair Bolsonaro’s election.

The Edge of Democracy is a perfect example of the somewhat-cliched phrase, “the personal is political”. The film tells the story of a country, but also of a family. “Brazilian democracy and I are both the same age,” says Costa, in a highly-personal voiceover that runs throughout the film. Costa’s parents were left-wing activists during the dictatorship, who spent years in hiding after briefly being imprisoned and seeing friends tortured and killed. The film takes the viewer through Costa’s excitement at left-wing president Lula’s election in 2002, her pride at the social policies he implemented and her disappointment with the shadow of corruption that hung over him during his presidency. “The personal is political”, too, for politicians filmed gleefully explaining their reasons for voting for Rousseff’s impeachment: “This is for my family!” they exclaim.

However, for some politicians, Dilma’s impeachment is not just a chance to celebrate their families. In a raucous parliamentary scene, Costa shows how a certain deputy Jair Bolsonaro dedicates his impeachment vote to a military general who presided over the torture of political prisoners during the dictatorship. Costa counters this gruesome spectacle with interviews with Rousseff herself, during the impeachment trial and after her removal from office, including a touching conversation filmed between Costa’s own mother and the former president: both women share their stories of resistance during the dictatorship. Costa has a knack for hovering, searching, haunting close-ups of her subjects, holding these close-ups long enough for us to feel we can read their thoughts. One marvellous scene encompasses Rousseff’s downfall, where Costa flicks through dozens of magazine covers from over a period of several years, showing how Rousseff goes from being celebrated to hounded by the media.

The Edge of Democracy is both a beautiful and eerie film to watch, as it includes a strong visual contrast between Brazilian political institutions and the public they serve. The dreamlike scenes of congressional buildings at night, with their futuristic 1960s architecture, shiny escalators and corridors, are contrasted with the confusion and chaos of crowd scenes, photographers’ flashes and the roars of flag-waving crowds. A revealing interview with a cleaner filmed inside one of the congressional buildings shows the disconnect between politicians inside grand buildings and disappointed voters on the outside.

Costa’s documentary is the third in a trilogy of semi-autobiographical films and a sense of the personal and political as intertwined is present in all three, as well as those haunting, hovering close-up. Costa’s first film is Undertow Eyes (2009) and the title is a reference to the mesmerising eyes of one of Brazilian literature’s most famous fictional characters: Capitu from Dom Casmurro by Machado de Assis. Undertow Eyes – available to watch for free on Vimeo – is a homage to the directors’ grandparents. A director deciding to celebrate her grandparents and film them in such a romantic, sensual way, feels radical, since cinema tends to shy away from such depictions of old age.

Costa’s second documentary Elena (2012) tells the story of her older sister, Elena. When Petra was born in 1983 her family had just come out of hiding and Elena was a teenager, excited to show off her sister to the family video-camera. Elena later leaves for New York to attempt to make a life for herself as an actor, an endeavour that ends in a family tragedy. In the film, Petra and her mother travel to New York to retrace Elena’s steps. Costa manages to turn immense sadness into something beautiful, through a combination of carefully-edited family footage and dream-like, fictional sequences, including a striking scene where Costa and her mother float, Ophelia-like, on their backs in water. The film-maker talks directly to her sister in the soundtrack and the result is an incredibly emotional experience.

Viewers who are interested in finding out more about Dilma Rousseff’s impeachment may enjoy The Trial (2018, dir. Maria Augusta Ramos), available to stream on MUBI. Like The Edge of Democracy, this documentary features some of the highly-charged impeachment scenes in Brazil’s Congress and on the streets in Brasilia, but centres on the politicians fighting against Rousseff’s trial. Viewed alongside The Edge of Democracy, the film feels lacking in opinion from outside Congress, something that Petra Costa manages to bring across so vividly with scenes of flag-waving protesters on both sides of the political spectrum, plus the director’s own personal commentary.

However, The Trial does transmit the exasperation of Rousseff’s political allies as they face the inevitable rise of the far-right in Congress, in an informative behind-the-scenes account of the downfall of a president. The long, confusing manoeuvres in Congress make the link to Kafka’s famous novel seem apt. It’s hard for frustrated politicians to mount a defence when it’s clear to them that Rousseff has not committed the crime she is accused of, and, ultimately, the crime itself is hardly relevant when the political mood is against them. The Trial is a necessary, if not exciting, film: one that lays the facts of these events down for future scrutiny, for a time when (possibly) the facts will matter more.

Undertow Eyes is available to watch for free on Vimeo.

Elena and The Edge of Democracy are available on Netflix.

The Trial is available on MUBI.