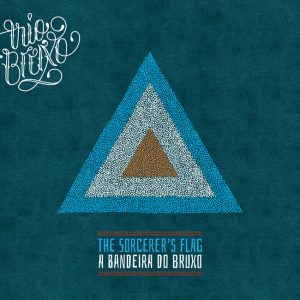 Review Trio Bruxo – A Bandeira do Bruxo (The Sorcerer’s Flag)

Great jazz pianists such as McCoy Tyner and Jessica Williams have risen memorably to the considerable challenge of playing an album’s worth of John Coltrane’s music. It’s hard, though, to imagine how the variegated and multi-textured music of two great Brazilian mavericks, Hermeto Pascaol and Egberto Gismonti, would translate to the classic format of piano, bass and drums. Sensibly, perhaps, this Canadian trio from Montreal don’t attempt to play the two maestros’ music, rather derive their inspiration from it – to the point, in fact, that they take their name from The Bearded One. As pianist David Ryshpan explains, “I named the group Trio Bruxo after reading an article on Hermeto, who is often referred to as a bruxo or sorcerer. His mystical presence truly imbues him with the magical aura of a wizard.”

Ryshpan and his cohorts, bass player Nicolas Bédard and drummer Mark Nelson, have been making names for themselves individually and together for some time. They began by exploring the Brazilian songbook in the vein of a “samba-jazz” piano trio of the 1960s and 1970s and have subsequently earned kudos backing vocalists as a rhythm section and appearing on assorted recordings. Ryshpan himself has toured in Jorge Ben Jor’s band, so there’s history and authenticity behind what could otherwise (and occasionally does) appear as an academic exercise.

Taking as his starting point the influence on Pascoal and Gismonti of the indigenous music of Brazil’s north-eastern regions, David Ryshpan’s compositions, as he explains, “looked at the musical languages of maracatú de baque virado and forró, and filtered them through the lens of my jazz training and explorations of classical compositional techniques.” Structured around theme and variations – exemplified by the two titular variations that bookend the album and the three-part “Pilgrimage Suite” at its heart – some of these 10 numbers suggest most closely the intimate, romantic jazz of Bill Evans, right down to the intricate interplay of Ryshpan’s piano and Bédard’s exceptional bass (more often electric than acoustic). As you listen, for example, to the second part of the “Pilgrimage Suite”, it doesn’t take much creative license to summon up the ghosts of Evans, La Faro and Motian past.

The proceedings start, on “Cheguei Meu Povo Variations”, with a faint and distant echo of what could almost be an early Herbie Hancock recording for Blue Note. They culminate with some effective literal echo on Ryshpan’s Fender Rhodes at the end of the sole group composition, “Electric Variation”. Between the two variations, there’s some fine music to enjoy. “Moa Vive”, for example, is another (two-part) suite dedicated to Mestre Moa do Katendê of Salvador, capital of Bahia. The songwriter and percussionist who pioneered the genre of afoxé was stabbed to death by a supporter of Bolsonaro on the night of the first round of the fateful 2018 elections. The senseless tragedy resonated with the composer: “The testimonials from Caetano Veloso and Gilberto Gil, artists I deeply admire,” Ryshpan reveals, “moved me to understand Moa’s role in Bahian culture more profoundly”, and to interpolate fragments of Moa’s song “Escola Viva” within the suite.

On the following “Pesquisando o Forró (Researching Forró)”, the addition of Ryshpan’s accordion to the mix and the frenetic changes of tempo add up to a palpable Pascoal-ian feel and perhaps the most successful realisation of the album’s musical narrative. In all honesty, though, it feels like a bit of a stretch sometimes to make the link to Gismonti and Pascoal. That said, this album is not at all a failure. Top-class musicianship and thoughtful compositions add up to quality jazz-piano music that takes an arresting approach to the genre. It will undoubtedly reward the patient listener who’s prepared to give it more than a cursory airing. In the immortal words of a cod compère in a jazz club somewhere, “Mmmmm, nice.”