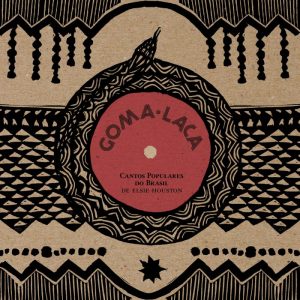 The book Chants Populaires du Brésil (Popular Brazilian Songs) was compiled by singer and researcher Elsie Houston and released in France in 1930. It has since become an incredibly rare artifact of Brazilian music, and still unpublished in Brazil. Essential for the worldwide diffusion of folkloric Brazilian music – it included modinhas, emboladas, candomblé songs, cocos, jongos and indigenous songs – the book has since become an inspiration for the Brazilian label Goma-Laca to produce their own new versions of the songs included, enter Cantos Populares do Brasil de Elsie (Elsie’s Popular Brazilian Songs).

“Elsie is vanguard”, says Biancamaria Binazzi, one of the Goma-Laca team. “Her story passes through Brazilian modernism, French surrealism, Stravinsky, bumba-meu-boi, candomblé [an Afro-Brazilian religion], Benjamin Péret, Mário de Andrade, Villa-Lobos, Mário Pedrosa, Pagu, Tarsila do Amaral and Tio Faustino. In music, she broke barriers between the popular and the erudite, taking the music of the street and of Afro-Brazilian religions to the heights of classical vocal music, and vice versa”.

The 20 songs that appear on the album show the beauty, diversity and richness of the music, which was collected by Houston from some of the most diverse places in Brazil, with many songs influenced by African-born religions. This plurality is made more evident on the new compilation in the singularity of each of the interpreters and instrumentalists: Alessandra Leão, Pastoras do Rosário, Siba, Juçara Marçal, Marcelo Pretto, Lívia Mattos, Marcos Paiva, Rodrigo Caçapa and André Mehmari are responsible for keeping alive the memory and musical sensitivity of Elsie.

“This is a labyrinth of melodies that for centuries have been crossing paths, merging and reinventing themselves in inspiration of each other, fascinating songs that resonate to this day,” explains Biancamaria.

The album comes with a 100-page booklet (in Portuguese) with texts that detail each one of the songs, with a biography and photographs of Houston, as well as texts she wrote. The daughter of an American and Brazilian couple, Elsie was born in Rio de Janeiro in 1902 and lived in Argentina, Germany, France, Brazil and the United States. She started studying classic song [i.e. classically-trained singing] at the age of 15 with the Italian Stella Parodi. In 1927 she married Benjamin Perét and in 1929 she began a series of research trips, recording her first songs in 1928. Houston died on February 20th 1943 in New York, leaving a vast sound archive on the musical history of Brazil.

Listen to Cantos Populares do Brasil de Elsie below: