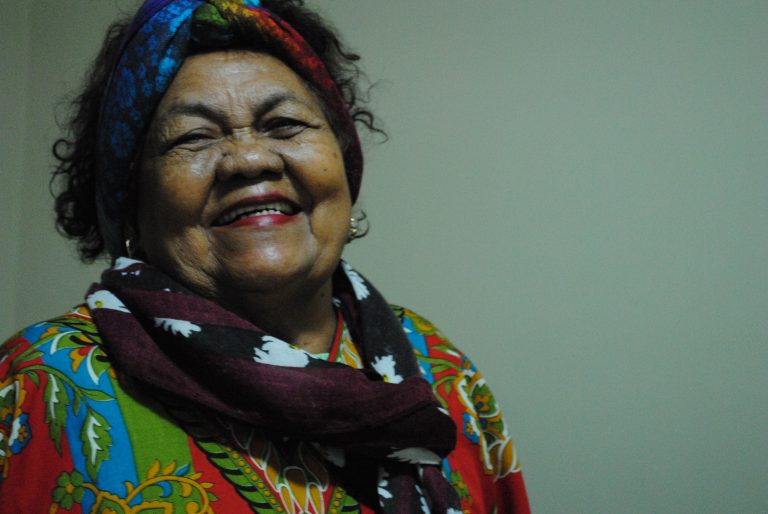 We Got To Keep On Fighting: An Interview with Dona Onete

The first time I listened to the music of Dona Onete was in a bar in Alter do Chão, a small beach by the side of the Tapajós river in the state of Pará. A local singer was playing a song of her just-released album Feitiço Caboclo. Before long, a rehearsal began for Sairé, a traditional local festival in which the main attraction is dancing and the confrontation of two dolphins (the pink river dolphin and the tucuxi dolphin), represented by two actors. The dolphins, called botos, are one of the main icons of Pará, and Dona Onete is proud of being called ‘the botos enchanter’. She carries with herself every trace of the paraense (e.g., of Pará state) and Amazonian culture.

Actor dressed as dolphin during the Sairé festival in Alter do Chão, Pará in 2012 (Photo by Rodolfo Oliveira)

At 77, Dona Onete released her second album this June. Banzeiro (an expression used to describe the waves caused by boats) brings more of the multi-racial mix that she likes to emphasise when talking about her music: it’s African, it’s French, it’s Amazonian. But Dona Onete describes herself as a woman of changes, and, in fact, her life radically changed when, at 72, she released her first album. What calls for great attention in Banzeiro is bangué, a quick rhythm brought by slaves to Igarapé-Miri, a small city in Pará, where Dona Onete used to teach history classes. Cumbia, bolero and her unique carimbó can also be heard in the album. After all, Dona Onete has dedicated her life to paraense culture and this influence is reflected in all of her songs. “My work is not to make money, but to publicize what we’ve got in Pará”, she says.

In this interview, that took place when Dona Onete crossed Brazil to play, for the first time, in Porto Alegre, in southern Brazil, she talks about her new album, her influences and her history.

Banzeiro brings some different influences in comparisons to Feitiço Caboclo…

A lot of. I show more of the caboclo things [caboclo is the mixture between white and indigenous people]. The other CD had some French things, such as creole swing, some black things. I talk about Dandara [a famous black Brazilian woman who fought against slavery]. The CD wasn’t made for Pará, but for the world. It went down other paths.

This first CD mixed carimbó, samba, bolero; it was eclectic, sophisticated. During Círio de Nazaré [a religious ceremony], a ship with tourists anchored in Belém and asked me to sing carimbó. And they loved it! I had with me only one CD and everyone was asking for it. So the owner of the ship made some pirate copies and distributed them to the passengers. That was my door to outside of the country. The album has won over the world, people sing it in China, England. The BBC contacted me to record a video for “Boi Guitarreiro”. So it is reaching the world without even reaching TV Globo. And that is what I want, I don’t want nobody telling me what to do. Yesterday I told a Globo producer, who records CDs for everyone to get rich: “That is not my work. My work is not to make money, but to publicize what we’ve got in Pará”. I can record an album with boleros, as he wants to, but I don’t want any compromises.

This new album can be caboclo, but also has an African influence, such as with bangué.

Yes. Bangué appeared in a small city, called Igarapé-Miri, the capital of açaí [a tree and fruit known for its health-giving properties], where black slaves who worked in the mills used to compose some verses. I used to go to a small village near there called Rio das Flores. From there I learn bangué.

This album also has some carimbó, bolero and cumbia songs. We have a strong influence of Caribbean culture here. Caribbean waters meet our waters. And so I play a caboclo cumbia, which is not the same as the rhythm they play, but it made the audience go wild in Rio yesterday. It’s our own rhythm, each place has its singularities. We preserve our origins in a very rustic way, because in Pará there hasn’t been so much cultural mixing, it was only black, white and indigenous people. French and English people almost didn’t get there, it was mainly the Portuguese.

There is a track on Banzeiro called “Na Linha do Arco-íris” (In the rainbow line), that talks about homophobia. What is the story of this song?

I am 77 and I’ve worked as a history teacher in elementary school. I have studied child and adolescent psychology and, actually, I was more like a mother than a teacher to my students. I have heard lots of stories and I suffer when I see what is happening. When we left Belém to go to the concert in Rio, the corpse of a fan of mine was arriving. He went to study in Rio and came back dead to Pará, just because he was homosexual. That shocks us. Nobody can be condemned for what he is. Some people steal things, kill people, and he was just a good person that loved in a different way. So I positioned myself. I have composed this song because there was a young guy who was my fan and was always visiting me, he would do everything for me. In front of his family he pretended to be someone that he wasn’t, but in my house he could fly, wander, we used to laugh together, sleep together, with my granddaughter and my maid. On my birthdays he used to show up in the evening. And he faced the same problem: he went to work in São Paulo and came back in a body bag. I cried a lot, so I made this song to get it off my chest. So I sing: “I lived in a sad world / That wasn’t mine, and then, I left the cocoon / Became a butterfly / Flew over the rainbow line / And in a colourful glittered world I landed”, because when he arrived at my home, it was another world, where nobody criticised him. Then, I say: “Accept! / Who is intelligent doesn’t reject”. And so was born this Dona Onete that has made the audience gone wild, without fighting against anyone, without being against the families, just saying what I have to say. I hope you understand. Yesterday, the LGBT people screamed my name, saying that I was their muse who has raised this flag. It’s been a good response. And I sing: “Stop! Listen!/ We got to keep on fighting”. Because nothing has been won. Gay marriage is a right, but we still have to fight for more respect.

Yourself and the famous carimbó singer Pinduca were born around the same period, yet he has been an icon of paraense music since the 1970s. How do you feel about being compared to him these days?

Some people say I have exceeded his level. Because he also travelled a lot, but he plays with a huge band, so it is harder to go further. What is happening to me is different, going to the United States, even in Japan DJs play my songs, but I can’t go there because I have some health issues. When I went to England, I saw Indians and Pakistanis enjoying my work. France already knows me, because of Balanço Crioulo, a song that French radios play exhaustively. And I couldn’t believe that in China they sing my songs in their language. People want me to go to Guinea Bissau and Cape Verde, they have sent me turbans as a gift. So, at 77, I have this happiness that many people haven’t been able to have, even with all my difficulties, being in a wheelchair, using walking sticks, but dancing a little bit to show that I can swing.

Was your career supposed to be like these? To what extent was it luck or planning?

It was not planned. I used to teach history for 23 classes. It was a lot. Then, I started to sing during the classes, so the students didn’t get bored. I have always been a woman of changes. Some people used to complain to the directors: “teacher Onete is singing”, and the answer was: “don’t mess with teacher Onete, because she knows what she is doing!”. And today my students follow me. I started singing rock in a band with Mestre Laurentino, called Coletivo Radio Cipó. They say that I’m a dolphin enchanter, because when I was a child I used to sing by the riverside to the dolphins. My history was mine and it became the history of everyone.

You can listen/download the title track from Banzeiro at naturamusical.com.br/baixe-e-ouca-banzeiro-da-dona-onete. Feitiço Caboclo is available from maisumdiscos.bandcamp.com/album/feiti-o-caboclo