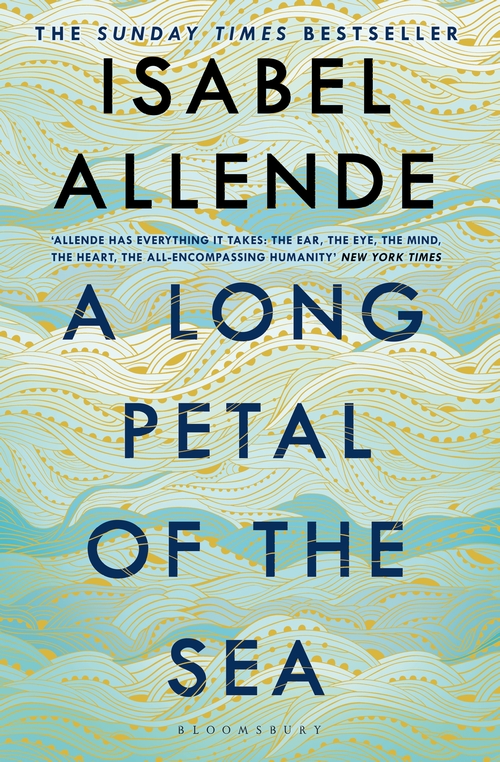 ‘A Long Petal of the Sea’ by Isabel Allende: The Extraordinary Lives of Spanish Refugees in Chile

A book with a cover almost as beautiful as its content, A Long Petal of the Sea by Isabel Allende follows two Catalonian-Spanish refugees who settle in Chile, and the extraordinary lives they build there. Roser and Victor Dalmau reach Chile in 1939 by travelling on the real-life ship SS Winnipeg, a ship funded by the Chilean poet-diplomat Pablo Neruda. The Dalmaus face civil war, a concentration camp, a disappeared family member and an extremely straining journey while Roser is pregnant, all in only the very first part of the book. In the second part, exile is transformed into belonging, against a tense political backdrop in the run-up to the election of socialist president Salvador Allende (related to Isabel) and the military coup that brought about the start of Pinochet’s dictatorship. The final part explores the aftermath of these political events for the couple, their family, and the connections they have made. The book’s narrative never stops giving and the relentless, action-packed, well-crafted spirit of Allende’s writing carries through right to the closing words.

Allende shows us that within just one couple’s story, there are many ways to suffer, many ways to love, and many lives to live.

Many ways to suffer

I was unfamiliar with the terrible suffering of the Spanish refugees who fled Francoist Spain during or in the aftermath of the Spanish Civil War (1936-39). But of course, Allende helped me imagine this:

“The exodus from Barcelona was a Dantesque spectacle of thousands of people shivering with cold in a stampede that soon slowed to a straggling procession travelling at the speed of the amputees, the wounded, the old folks, and the children.”

The book tells of Roser and Victor’s plight as refugees and doesn’t stop there as we also see the effects of a complicated class divide in Chile and difficult family issues. When the Dalmaus meet the Del Solars – a wealthy, upper class, and very traditionally Christian family – the reader gets some insight how difficult it is to start again in a new country. Some plot lines involving the Del Solars, told on the side, also show the devastating effects of oppressive family traditions.

Political events also invoke a fair degree of suffering. By the time Roser and Victor declare themselves Chilean, they have seen a military coup and Victor is taken as a political prisoner into a concentration camp. The consequences include a (second) exile to Venezuela and hard but rewarding work in a shantytown which eventually also becomes lost to the Dalmaus. Without spoiling the entire novel (yes, there is still more) it’s fair to say that A Long Petal of the Sea is an emotive tribute to the elasticity of human endeavour.

Many ways to love

A really interesting feature of A Long Petal of the Sea is Allende’s depiction of love as an exceptional human journey that may overpower suffering, may interact with it, or may cause some difficulties. Victor and Roser’s marriage starts out as an unusual one then evolves through twists and turns into a something bigger even than the sum of two people’s very eventful lives. Around faithfulness, Allende manages to introduce powerful nuances with a tone borne out of a fantastic mix of passion and gentleness.

Familial love is also less-than-straightforward. There are holes in the traditional family unit right from the beginning, with more upsetting loss added as the story progresses. Family members are far from constant, and Allende’s reminder of this fact brings a plot twist in the very last pages.

The characters themselves recognise love as a double-edged sword:

“It takes heroic willpower just to keep everything in place. Those are a refugee’s forebodings, said Roser. No, they’re the forebodings of someone in love,” Victor corrected her.

How Allende’s writing intertwines love into the most human elements of an action-packed story, and how this is captured through a brilliant translation by Caistor and Hopkinson, makes fora brilliant achievement.

Many lives to live

Roser’s character was perhaps one of my favourite things about the book, because she is ferociously unperturbable, supportive and hard-working, though not perfect. She is given a presence that is picked out very early on as having “lived three lives already”, and this is only at the beginning of her time in Chile. A few characters, in fact, turn out to live many lives, not always easy ones or flawless ones, but ones that I am grateful to have been told through Allende’s intelligent and lyrical prose.

As a post-script, there’s a (unintended but effective) nod to the COVID-19 generation hidden in A Long Petal of the Sea. In the UK and other countries, when rumours of a lockdown hit the cities, many people bulk-bought essential products such as toilet paper, in a panic. Whether written with or without irony, the following quotation may make any observers of recent events smile:

“I’ll see if I can get some things for you”. “Such as what?” “Toilet paper, for example. There’s a patient who sometimes brings me rolls of toilet paper as a gift.” “Goodness! That’s more precious than gold, Victor.”

A Long Petal of the Sea, translated by Nick Caistor and Amanda Hopkinson and published by Bloomsbury, is available from Hive (UK) and Bookshop (US).