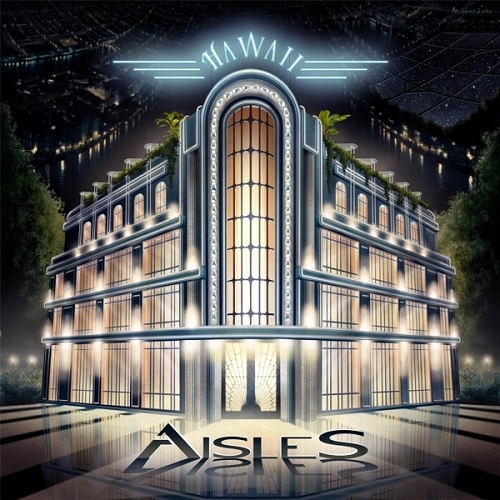 The Chilean neo prog band Aisles have come a long way and with their latest effort Hawaii they have undoubtedly caught the attention of the press. Not just in Chile, where they have been known for years but remained an underground cult until the release of this new album, recently they have been featured in the worldwide-renowned Prog Magazine and both their Camden show a month ago and their finest release to date have been praised in their review section.

And if the UK prog heads say it’s a masterpiece, it is. Britain invented prog rock with albums such as King Crimson’s In The Court Of The Crimson King (1969) and the debut of the now legendary Emerson Lake & Palmer (1970), and they also invented concept albums with works such as The Beatles’ Sgt Pepper’s Lonely Hearts Club Band (1967), The Pretty Things’ S.F. Sorrow (1968) and The Who’s Tommy (1969). Following the 80s, new prog efforts from Marillion (Misplaced Childhood, Clutching At Straws) and the new wave/prog crossovers of genre-defining bands such as the Canadians Rush (Moving Pictures, Signals, Grace Under Pressure, Power Windows), and the Brits Genesis (Genesis, Invisible Touch) and Yes (90125, Big Generator), the genre got lost and almost vanished into darkness. With bands like Anathema, Katatonia, Opeth and Porcupine Tree (and also Steven Wilson’s solo material) there has been a revival of the classic motifs in the metal world. Aisles, go back to these roots and following the ideas of their song “Hawaii”, included on their Sudden Walks album in 2009, they constructed a double album that is worth every inch of sound. “Upside Down”, “Pale Blue Dot” and “Ch-7” are absolute highlights of this masterpiece.

Packaged with mind-blowing artwork that revisits the importance of the album cover in this world of legal downloads and online streaming, it presents the story of a spaceship carrying the surviving members of the human species. With their memories and a longing for a world that’s forever gone, the passengers face their destiny looking in to the unknown. Among their remaining possessions there is a record player and a vinyl with a song called “Club Hawaii”. It is the only reminder of music for the future generations.

This brilliant piece of work, just as with that old fashioned record lost in space, is made to last. It is a cosmic journey into the vision of this band, a vision where music is made to capture our imaginations once more. Be curious. Discover this album. You will be thrilled to the bone. Анкеты проституток. Тюмень Лучшие проститутки города у нас!

Hawaii is available from aisles.bandcamp.com/album/hawaii