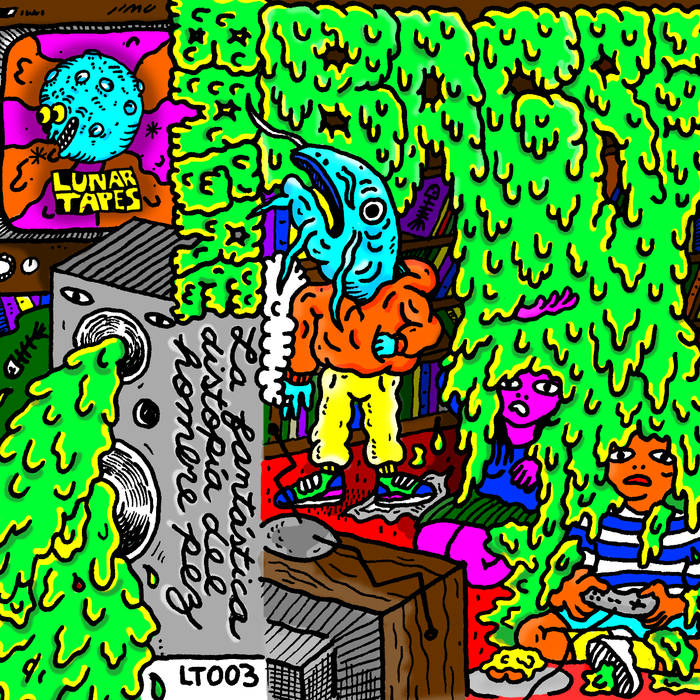 Presented as a cassette and digital label, Lunar Tapes is one of the most interesting projects mixing lo-fi beats and experimental music in the Chilean map of alternative hip-hop and futuristic electronica. With less than a year of activity, their distinct personality is complemented by analogue instruments and hand-drawn visuals.

Founded in Santiago by Eggglub and Flakodiablo, they wasted no time in expanding their influences and connections. Hailing from Talca, 256 kilometers south of Santiago, Bagre is the first artist to join the crew, with his characteristic cinematic samples and dark atmospheres that first made waves with his 2014 album Desechos Del Habitaculo, released by Barbatruco Producciones.

On La Fantástica Distopía Del Hombre Pez, Bagre is reunited with his Roland SP-404 for more intricate production and boom-bap excursions, leaving always room for sci-fi movie and 8-bit soundtrack-esque compositions. A key factor in the success of the Lunar Tapes crew are these hyper-textual references that take place in the creative process, making them able to connect with a broader and sophisticated electronic audience.

The album is almost a dramatic tale of love, war, life and death, with every small episode being assignable to an adult comic book, an episode of a retro spacial TV series or a stage in an adventure videogame. When you hear the first two tracks, “THX-11384EB” and “Fase Inicial”, you can hear chiptune textures and glitch-hop elements, then you also get the more instrumental rap-oriented cuts like “Implementación Del Cuartel” or “Fiesta En El Subnivel 8”, which function as a balance for the classic hip-hop ears. “Nuevas Instalaciones” and “El Primer Caido” mix perfectly raw beats with retro synth leads that encapsulate his motion picturesque style.

The visual work has been left in the hands of ENZO 44, whose illustrations are all over the label’s catalogue, and his style is well-suited for this twisted and obscure album by Bagre, with a limited edition of 50 copies of green tape cassette. The whole piece is divided into two chapters that you can also listen to in mixed mode through the digital download, so you can get the idea of listening to the tape one side at a time.

It is strictly recommended to listen to the first three instalments on this emerging label to understand the new angles that the Santiago beat scene is offering, moving forward with better quality productions and fresh ideas to connect with the global underground hip-hop movement.