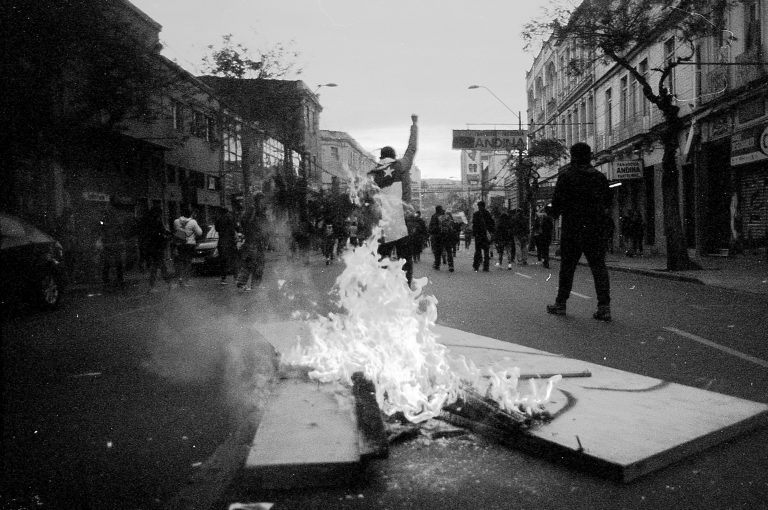 At least 14 people dead and over 1,400 detained, a state of emergency in 11 of the country’s 16 regions and major cities under curfew (some starting at 6pm) is a summary of what’s currently going on in Chile, and the way that protests are being managed by the government. What started as a reaction to metro fare increases, has ended up opening eyes to social inequality, the cost of living and dissatisfaction with the way the country is being run. In the worst unrest since Pinochet, there is a growing feeling that what Pinochet began, did not end with the so-called “return to democracy”, with people who backed the coup still in powerful political positions.

After the protests began on Friday, it wasn’t long before musicians began sending messages to the president, like Mon Laferte who said “let the world know that you are a dictator“. Some have taken over the streets, with Alex Andwanter performing for the pacific protest in Ñuñoa public square. Bolder and angrier, Pablo Chill-E went direct to the riots helping people to deal with the tear gas, giving away lemons and supporting the marches. His stance goes counter to the argument that trap is not socially conscious, something which he already made clear on his track “Facts”, where he called Piñera a “latent danger”, and said that politicians rob more than criminals.

It was an uprising so quick that it even caught out some socially- and politically-critical artists off guard, and on tour, like Juanito Ayala, former member of Juana Fé, who sent various messages from the United States, eager to be on the people’s front. Going to the streets was also the motto of Ana Tijoux‘ viral track “Cacerolazo” [below], which asks Piñera to resign (#RenunciaPiñera) for tax evasions by various economic groups, a Pinochet-approved political constitution and the government-attributed deaths of activists like Camilo Catrillanca and Macarena Valdés.

With unrest spreading across the country, the state of emergency in Chile is showing no signs of stopping yet, with the Government providing no satisfactory answers to the metro price increases, or any of the other issues that have come to light over these past days.