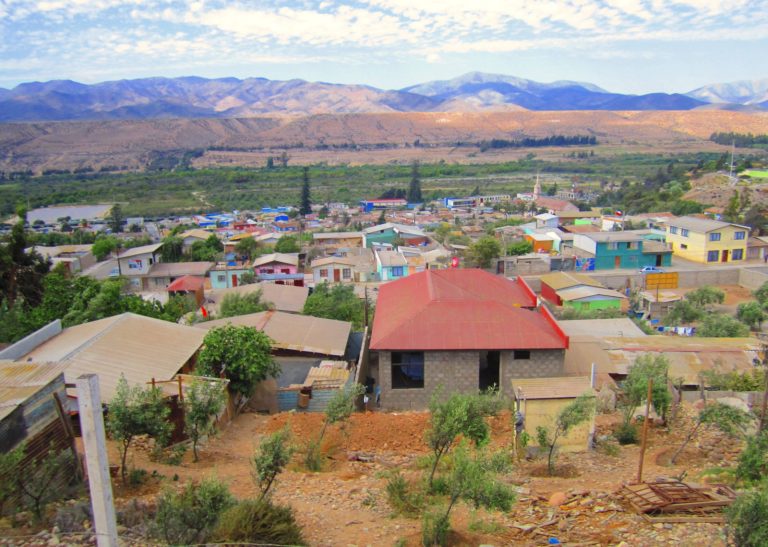 This story is part of Covering Climate Now, a global journalism collaboration strengthening coverage of the climate story.

In 2018, Marta Morales, a 35-year-old small farmer, was forced to leave her hometown of Colliguay in rural central Chile. Morales grew up cultivating her family’s one-acre plot, producing vegetables to eat and to sell for income. But over the last decade, the dependable rhythm of dry summers and rainy winters gave way to prolonged drought, making it difficult to maintain the farm.

“In the past, it rained more,” Morales said in Spanish. “Farmers took turns irrigating their farms with water from mountain streams. Today, there are almost no streams left.”

Lacking enough water to nourish their crops, farmers began to leave Colliguay. In the years leading up to Morales’ move, three schools in Colliguay shut down, including the one closest to her house, because there were so few children left. Worried about her toddler’s education, she joined the throngs of growers migrating to cities.

Since 2010, Chile has been suffering from what experts call a megasequia, or megadrought. It is currently the most water stressed nation in the Western Hemisphere, with up to 76 percent of the country enduring drought conditions. The drought has hit farmers like Morales especially hard. Grappling with critical water shortages and a system that privileges large-scale agricultural operations over artisanal growers, many small farmers are now moving to cities.

“We grew up as farmers, and reinventing ourselves in the city is not easy,” Morales said. “It is hard to lose ties with the earth, the sun and nature. It is sad and painful.”

The drought is the product of multiple factors. The world recently entered La Niña, a period when cool ocean waters rise to the surface of the eastern Pacific, which can make rainfall in Chile more sporadic. La Niña fits a larger cooling pattern in the eastern Pacific that is part of the natural fluctuation in the Earth’s climate.

Human-caused climate change is also contributing to the drought. Warmer air temperatures are shrinking glaciers that feed streams and rivers and disrupting rainfall patterns. A 2015 study found that climate change is to blame for around a quarter of the rainfall deficit in central Chile.

Persistent dry spells have turned forests and farmlands into desert. The problem has grown so dire that the government has declared an agricultural emergency in many areas.

“In central and south Chile, we’re seeing important changes to the landscape,” said Lisandro Roco, a professor of agricultural economics at Universidad Austral de Chile, and a member of the UN Intergovernmental Panel on Climate Change. “We have a more dry landscape. We have less forest and less green in the summer.”

In Monte Patria, a small community in Chile’s arid north, 15 percent of the town’s farmers have migrated elsewhere. These farmers constitute the first documented case of internal displacement in Chile due to climate change, according to the United Nations. Other towns are emptying out as the drought drags on.

“People are leaving because they cannot keep on doing agriculture,” said Carolina Alvarado Aspillaga, a farmer and activist from Colliguay. “Older people can’t transmit local knowledge to kids because kids migrate to the city, and they don’t come back because there is no water.”

Arturo Herrera Román, a small winegrower from the Marga Marga Valley in central Chile, makes wine from grapes that were brought over by the Spaniards in the 16th century. He said that, for the most part, he used to be able to rely on rainfall to grow his grapes. He only had to irrigate his fields once or twice a year.

But now, rainfall is scarce, and Román has not been able to irrigate his fields in the past five years due to water shortages. He said the Marga Marga Valley was once home to many producers, but now only a handful are left.

“The lack of rainwater can be seen in the color of the trees and the loss of species such as cinnamon and peumos [a Chilean evergreen tree],” Román said in Spanish. “The fact that we are still producing wine is an act of resistance against climate change, but as the years go by, it becomes harder and more unsustainable. It’s hard to say if we will be here 10 years from now.”

One factor making things more difficult for many small farmers is that Chile is the only country in the world with a fully privatized water system.

The Chilean constitution ensures access to water, but in practice, market forces decide who gets water rights, Roco said. In this tug of war, industrial farmers growing export crops, like avocados, are able to pay more for water, boxing out small farmers.

“The domestic market is mainly supplied by small-scale farmers,” Roco said. “But it’s more difficult for these small, family farmers to adapt to climate change.”

The Codigo de Aguas, the water code, came into being during General Pinochet’s dictatorship. Under the code, water rights go to the highest bidder. Over the years, rivers, glaciers and underground water rights have been sold to international firms, mainly in mining and large-scale agriculture. Many small farmers struggle to navigate the complex registration system that was created to keep track of water rights, Roco said.

“Farmers are not able to register for water rights because the register is too complicated and there is a lack of information,” she said. “Additionally, there are people who purchase water rights, but don’t use them. They’re waiting to sell the rights for a higher price in the market.”

Andrea Soledad Cisternas Araya is a farmer from Freirina in the Huasco Valley, a fertile area bordering the Atacama desert. Farmers in her community have restricted access to water coming from rivers – Araya pays a monthly fee equivalent to 10 US dollars for a few liters of water to partly irrigate her crops. Farmers are also banned from digging wells if they do not own the rights to the underground water. Araya, who advocates for small farmers’ water rights, said that the Huasco Valley was once green, covered with fruit trees and roaming cows. Today, almost everything is gone, and farmers are on the move.

“We are clearly feeling the effects of climate change, because we live in a semi-arid desert. When I was a child, it used to rain every 5 years. Today, it rains every 15 years,” Araya said in Spanish. “The rivers are disappearing.”

Local activists have been pushing for reforms, with some success. Last year, Chileans voted to rewrite their constitution, and soon they will elect members to a constitutional convention. Activists are hoping to put an end to water privatization through this process. And last month, the Chilean congress passed a bill to create a ministry to oversee the 43 institutions handling water rights. For now, however, Chile still lacks a long-term framework for addressing water scarcity, Roco said.

“Water access is a pressing issue in Chile. People are aware of it. People are demanding a new governance system for water,” Roco said. “As long as farmers face water shortages, people are going to keep moving.”