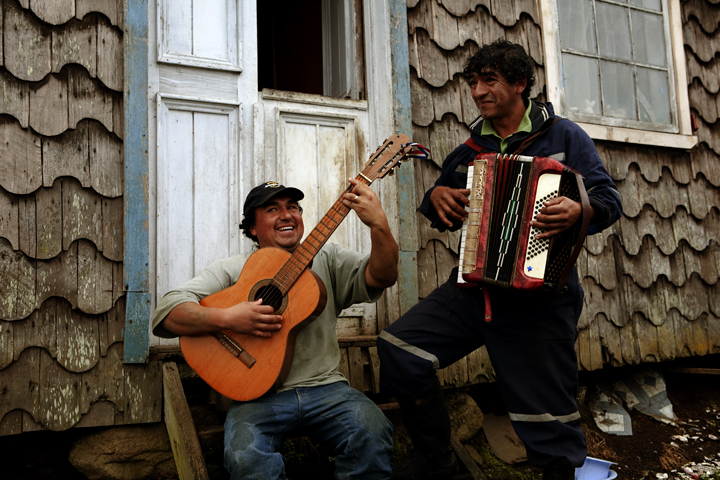 There is no bridge linking the two shores of the Cachao Channel. Luckily or not, until today, the only way that chilotes can reach the continent is by ferry: navigating through the rough waters of the channel from Chacao to Pargua on mainland Chile. But, inevitably, the opposite is also true: Chileans, to arrive on the island, have to go to sea too.

This circumstance has arguably protected and preserved Chiloé. The islands still maintain their old-value beauty, their uncorrupted heritage and charming identity. Even if, during the last centuries, and the last decades in particular, the archipelago has embraced the influences coming from the mainland, it has done so while watering them down, diluting them with their indigenous traditions.

So, if on one hand, it is possible to agree with Bernando Subercaseaux when he affirms that, during the last decades, the intrusion of the pervading contemporary culture has reached Chiloé and changed its landscape, on the other, as Juan Bahamonde notes, across the islands, the presence of a cultural resistance has succeeded in safeguarding the autochthonous tradition from the new invasive cultural “species”.

The strength of the archipelago lies indeed in its cultural resistencia: the associations and single enlightened men of culture who oppose the rising cultural globalization. Thanks to them, Chiloé is still today what Ovidio Lagos has defined as “Un Mundo Separado”: a region which shows, at the same time, a creative richness regarding its artistic expressions and the ability to protect its unique and long-time folklore. The latter aspect has been crucial in the course of the last part of the XX century.

When the Chiloé churches were enlisted among the UNESCO patrimonies, a renewed interest in the islands’ culture sprouted up all over the world. At the same time, the desire to protect Chiloé culture at large became crucial for locals and Chiloé lovers too. Tourism was the first factor which boosted the rediscovery and revival of the insular cultural forms, of which music played a pivotal role. Next to it, as affirmed by Waldo Garrido, the new media (radio, television and internet) were the main protagonists responsible for literally breaking into the solitude and isolation of the region exposing and popularizing its most indigenous characters.

Despite the fact that many features of the chilote tradition were adopted from or imposed by the Spanish colonizers and the Jesuit and Franciscans missionaries during the XVII and XVIII centuries, it is the chono and the hilliche heritages, which still lie at the basis of the Chiloé culture. In particular, it was the hiliche people and the southern mapuche – who still live between the Los Ríos and Los Lagos regions – who developed the distinctive cultural practices that still endure today on the islands. Even if chilote folklore is the result of the mixture of many influences, which could also be defined as mestizo (mixed), there are traits that clearly distinguish the local tradition from the mainland one.

These differences are mirrored by music too and Waldo Garrido mainly identifies them in the great vitality of the tunes played: in their agile tempos, upbeat feelings and vibrant rhythms. Although a vast part of the chilote repertoire reflects melancholic emotions, nostalgic stories and wistful moods, the tunes are indeed usually accompanied by lively musical compositions, as well as the instrumentation used by the local musicians, who have to juggle between singing, dancing and performing during performances.

Next to traditional instruments like violin, guitar, drums and accordion, the musicians play many popular, cheap and smaller equipment like the rabel, the bombo chilote, the matraca and the charranco; all of which are easy to carry and comfortable to hold when dancing and moving around. Since the 1960s and the first wave of Chilean folkloric research and field works, Chiloé music has been considered a priceless cultural patrimony.

Margot Loyola, who led the first extensive investigations on the islands in 1961, decided to focus her studies not only on music but also on traditional dances, because it was through the dance moves that the music was able to fulfil itself. Margot wasn’t just a researcher, but also an interpreter and dancer; without an academic education, she was nevertheless able to expose many traits of the culture. Travelling between the islands, she became an integral part of the different communities she visited: she sang next to chilote people, she played and danced with them. She became, for example, a wonderful performer of “La Pericona”, one of the finest traditional dances of Chiloé.

Margot Loyola was arguably one of the first music researchers to understand the importance and richness of the archipelago’s folklore: as she affirmed, the islands had a wealth of traditions and it was possible to notice it simply by observing the chilote people during their everyday lives. Thanks to the work of Loyola, and later her colleagues Pizarro and Pavez, the chilote songs started to be included in cancioneros and collections and exposed to a broader audience.

The main subject of the studies was undoubtedly la cueca chilota: a local version of the Chilean national dance. The dance, which can be considered as one of the most significant folkloric expressions of the islands, reflects in its music and choreographies the great vitality of the Chiloé people, as well as a pervasive influence of religion. The vigorous and festive characters of the music are the quintessential elements of the chilote cueca which differentiate the islander form from the Chilean one. In addition, the Chiloé cuenca is also dominated by the emphatic voice of the cantor who towers above the other musicians.

Margot Loyola was a great interpreter of Chiloé cuecas, but she was not alone in championing the style. echo. Arguably, the most influential and identifiable voice that sung Chiloé and its tradition was “el capitán de los cantares chilote”: Amador Cárdenas. Born on the island of Linlín, he started to become passionate about his roots when he was a high-school student in Concepción and Castro, and dedicated much of his career to the archipelago: studying, analysing, performing and teaching the islands’ music.

Singer, director, musician, teacher, dancer and collector, Cárdenas embodied all the artistic figures able to revive and safeguard a culture. But it was mostly through the many ensembles, which he formed, played with and developed, that he was able to represent the chilote music at full. Bands like Achao or Llauquil, were not only dedicated to a revival of the local traditions, but also to develop a more contemporary vision of that sound and to promote it all over Chile. Cárdenas mainly focused his work on valses chilotes and through them he shone a light on the conditions of the peasants, dignifying their personalities and lives. Since he was also interested in the folkloric expressions of his country at large, he decided to import and make extensive use of “continental” styles and instruments like the flauta de sauco, the alita, the charrasca and the matraquilla.

Less universally recognized as Cardenás, but also crucial for chilote music were Don Coché Molina and El Canahue, today considered as two of the main exponents of the chilote culture at large. They were born and have lived most of their lives on the islands, interpreting, like Cardenás, the essence of their countrymen. Through the richness of their interpretations and the expressivity of their guitars, they poeticized the simple complexity of the local farmers and peasants. Next to Jerónimo Barría, another great cantor of the islands, they have become the voice of Chiloé folklore and, until a few years ago, they had participated in festivals and meetings across Chile.

But Chiloé also shows itself in the voice of Rosario Hueicha, who, until her death 14 years ago, was living testament to island life. Daughter of a sailor and niece of a guitarist, thanks to the help of her uncle, she set to music the myriad of stories her father narrated her when she was a child. In this way, her tunes have become a cross section of chilote history, describing the everyday lives of the huliche, their characters and habits. Like her colleagues, Doña Rosario also travelled around the country extensively, protecting, spreading and promoting the culture of the islands. She became a close friend of Violeta Parra, sharing with the songwriter the dedication for the oppressed and guiding her through her research trips around Chiloé. The best recognition she ever had was probably her nickname: she was called the “orgullo de los chilotes” (pride of the chilotes) being a faithful and touching interpreter of the hopes and the suffering of her people. Her work, like those mentioned earlier, ranged the whole gamut of music and dances typical of the islands: next to the cuecas, it included the vals chilote, the trastrasera, the chocolate and the costillar.

In this way, all these artists are rightfully considered as a compendium of the chilote music and are unavoidable for everyone who wants to approach the culture of the region.

Since the 1980s and the new trend of Chilean folkloric music dedicated to the rediscovery of the country’s cultural origins, a new bright light has been shone on the Chiloé archipelago. Next to the historic cantors who still represent the musical memory of the islands, many new projects have arrived to recover and protect the traditional repertoire.

Among them, bands like Grupo Chamal and Chilhué are some of the most significant examples. Their works start where their predecessor left off, but, at the same time, they have added new influences and external elements to enrich their work and please a different breed of listener. In this way, they have embellished the conventional interpretations with a more modern viewpoint and sounds coming from Spain, Central America and Western Africa.

Next to them, local bands have also updated their sound and ideas. They sing about environmental issues, about globalization and the danger behind cultural contamination: subjects that matter to the different communities of the Chiloé islands. A glaring example of this process is Banda Bordemar, a group which has taken the chilote culture all around the world. Mixing traditional tunes with more refined pop and jazz influences, they have developed their own musical language, which has helped the chilote sound to reach new audiences.

On the same basis, with the same will to combine traditional influences with a more modern attitude are Trifulka: a sextet which presents the Chiloé autochthonous folklore in a smoother key, also using elements typical of the Latin and African music. Despite their music moving further away from the original archipelago styles, the lyrics that they sing are always grounded in their chilote roots: they narrate their life on the islands and talk about topical subjects like the bridge on the Cachao Channel and the protection of natural heritage.

Chiloé rarely makes the news, and as such, has has always stimulated the interest of researchers and artists. Maybe that’s because it is brilliantly skilled in hiding its vivid and expressive folklore, which faithfully represents the inner richness of its people.