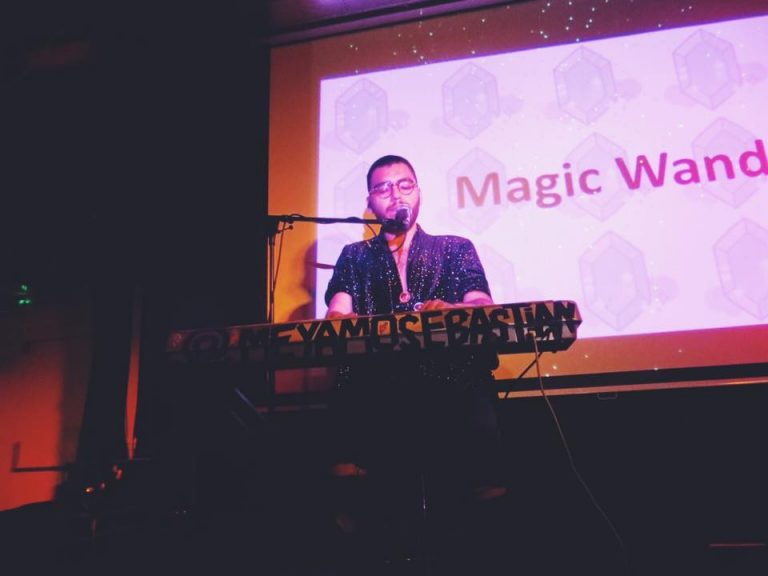 Chilean artist (Me Llamo) Sebastian had just arrived to Amsterdam, the first destination on his European Homeless Tour, and is playing to a small crowd of around 20 people. After asking the audience if he could speak in Spanish (only two people couldn’t), he starts his show – one man and his keyboard.

(Me Llamo) Sebastian is attracting attention in both his homeland and abroad. Despite having made four studio albums, it is only recently he has started to become a more prominent figure on the Chilean music scene. His bare, emotional, and often sardonically witty lyrics combined with powerful vocals are at the core of his songs – it is his lyrics that define his artistry. He is aware of the storytelling nature of his songs, and to ensure that translates to an international, non-Spanish (or Chileno) speaking crowd, he has asked fans via his Facebook page to translate the set. He performs four songs against a projection of his translated lyrics, which works well.

It’s an intimate, stripped back affair. The audience, mostly Chilean, are forgiving of his mistakes and the unpolished nature of the show. It is like sitting in someone’s living room and watching an impromptu gig. Sebastian banters with the crowd, getting everyone to sit closer and involving members to help translate for the two non-Spanish speakers. His own songs fit well to this atmosphere; a man bearing his soul about growing up gay in a conservative Catholic country, about falling in love, heartbreak and identity.

His covers of Lana del Ray’s “Video Games” and Sia’s “Chandelier” may not work so well with an English speaking crowd. Sebastian’s English is fine for chatting to the audience, but it isn’t rehearsed enough to aptly cover these songs. He starts and stops and forgets lyrics, while his own original songs are performed far better.

Sebastian is set to play more shows in Amsterdam and then onto Spain and Berlin, and one wonders if his show will become a bit more polished as it becomes more practised. Yet the rusty and unrehearsed parts of the set added to the natural intimacy of his songs; as if we were all acquaintances, watching a friend sing out his diary to us.

(Me Llamo) Sebastian is currently on his Homeless Tour in Europe. He will be in Amsterdam from 28th September until 9th October, Madrid from 10th October until 31st October and Berlin from 31st October until 6th November. More details at facebook.com/Me-llamo-Sebasti%C3%A1n-159300780771639

You can watch the video to his latest single “Las Polillas” below: