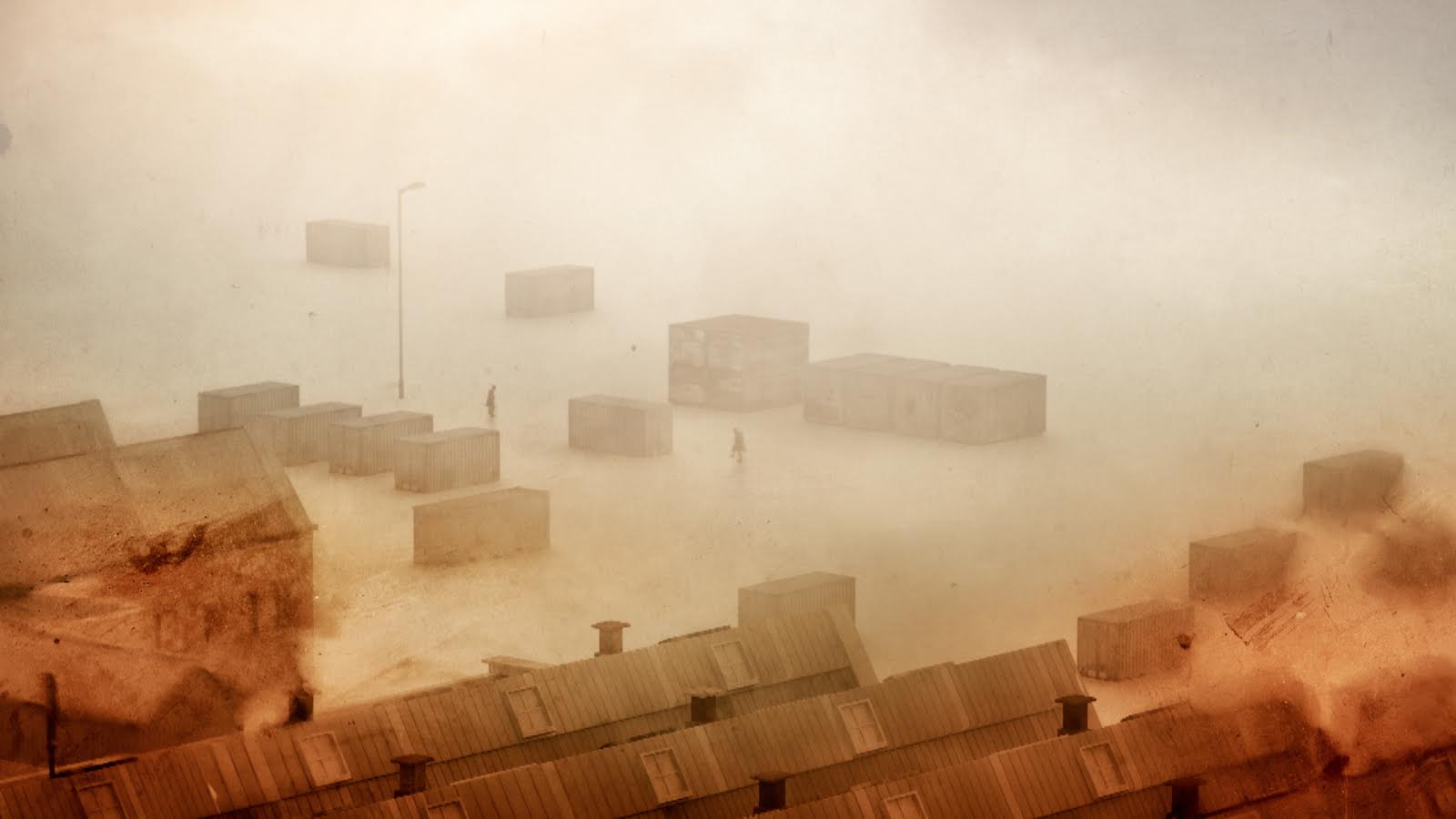 In the 1970s, as Chile found itself within the iron grip of General Pinochet’s military dictatorship, solidarity movements sprung up across the globe as communities and organisations stood with the Chilean people in the face of repression. One such place was in the Scottish town of East Kilbride, where factory workers played an active role against the tyranny of military rule. The story forms the subject of a new film, Nae Pasarán, from director Felipe Bustos Sierra, who grew up in Scotland and Belgium as the son of Chilean exiles. We spoke to Felipe about his film and the wider implications of the workers’ noble stand.

Nae Pasarán will be showing this Sunday 9th November at Rich Mix in London as part of Alborada Films‘ event Cine Liberación, a day of films and discussions dedicated to political documentary in Latin America.

Hi Felipe. Could you tell us about the film?

Nae Pasaran is a short documentary about the longest-running single action of solidarity for Chile in the UK. In East Kilbride, Scotland, factory workers at Rolls-Royce refused to work on the jet engines of the infamous Hawker Hunter fighter bombers which attacked the Presidential Palace in Chile during the military coup on the 11th September 1973. The elected president, Salvador Allende, died during the siege. The planes were British-made and the engines were built and serviced in East Kilbride. After four years in Scotland, the engines mysteriously disappeared in the middle of the night. We meet the three surviving workers, Robert Somerville, John Keenan and the 91-year-old Bob Fulton. Bob is the man who first realised the engines were in the factory and put his job on the line when he refused to work on them. He’s one of the most colourful people I’ve ever met.

What was the reaction in Chile to the actions of the Scottish workers?

Like anything in Chile about the coup, reactions were polarised. The film got a lot of attention in the media, essentially because the story wasn’t very well known over there. Even at the time, it was minimised and relegated to the side notes. The mystery behind the disappearance of the engines wasn’t as important to Chilean audiences as the story of the guys themselves. Initially, responses to the film were incredibly warm and grateful. The screening at the Santiago International Documentary Festival (FIDOCS9 and the Q&A was fantastic although there were people claiming we’d made another ‘commie’ film and that we were trying to spread our ‘red’ agenda. I am biased, of course, my father was an exile and I’m firmly on the workers’ side but there’s no white-washing. What the workers hear in the film about what happened to the engines was tough for them to hear. There’s no escaping from the truth, unless you believe the coup was a positive thing and then anything can be denied or excused. Some said they couldn’t be sure we hadn’t made the whole thing up. It’s a shame because we went to great lengths to be as accurate as possible based on the research. Most of the information confirming the content of the film was only declassified last year. A lot more could’ve been said but I wanted to find at least two sources for everything and that is very difficult considering how careful the Pinochet regime was about covering its tracks. Mostly, it gave me access to talk to a lot more people and there’s now a much sharper story to tell.

What became of the workers after their refusal to work on the jet engines? Were they able to continue their jobs as before?

They kept working till their retirement. They simply worked on all the other engines going through the factory at the time. The entire factory voted to keep the ‘blackings’ and the trade unions were behind them. They thought they might get fired but those were clearly different times.

What was the reaction in the wider community in East Kilbride?

Very positive. We had a special screening there and invited all the current Rolls Royce workers. Some were interested because they knew of the story before but, I think, most showed up because it was something interesting that had happened in East Kilbride! There was a high school teacher there who’d shown the trailer to his pupils to tell them about the “Other 9/11”. Now the short film is part of a curriculum on equality and social justice in schools in South Lanarkshire.

Was there any government or industrial interference in the matter?

The British Government was supportive at first, indirectly. I don’t think they were supportive of the workers’ action but they felt that something had to be done against Pinochet’s dictatorship. They refused to issue the export licenses for the engines, which probably didn’t affect the workers’ decision but it helped them along the way. Eventually British corporations put pressure on the Prime Minister (Harold Wilson, then James Callaghan) because Chile in return was refusing to make deals with British companies until their engines were out of Scotland. Looking through the archives, it’s clear business matters take precedence eventually.

How did you come to learn about the workers in East Kilbride?

I’d heard about the Chilean engines in Scotland as a kid, growing up in Belgium. My father was an exile from Valparaiso. He was a student journalist when the coup happened and found a job in Brussels with the Radio Internationale. A lot of high-profile exiles were going through Europe at the time to raise awareness and a few stayed with us in our flat. All those stories of international solidarity were told through word-of-mouth. That was one of them. As a kid, it stood out because it sounded so dramatic, so big and action-packed. I knew Robert Somerville’s name because he’d been the most active later on and helped Chilean refugees getting settled in Scotland. I found him first and he got me in touch with the others. They were a bit surprised about the interest, I think. I guess they’d made peace with the fact that it was all over and nothing new could be discovered.

What was the most eye-opening aspect of making the film?

How strongly the story affects people outside of Scotland and Chile. I made the film initially for the guys and for me. The first thing they asked me – and I think it was a big part of their enthusiasm – was: “Do you think you can find where the engines ended up?” It was our contract! I wanted to know for myself as well because, as I got older, I realised a lot of the stories had been exaggerated and embellished. I understand it’s what was needed at the time for morale but I think we need to know the truth, as simple and ugly as it can sometimes be. Too many pedestals built on half-truths. We can’t undo the past but if we’re going to still live in it – and many still do – then we should know exactly what we’re talking about. And Nae Pasaran is less glorious than the story I heard when I was a kid, but the simplicity of it makes it more relatable and relevant. They weren’t extraordinary people and they acted based on what they knew they could do. They simply said ‘I don’t agree with this’ and, I think, that’s universal.

You live in Scotland. Was there a big Chilean solidarity movement there?

There were Chile Solidarity Campaigns offices in most of the big cities and Hortensia Allende, Salvador Allende’s widow, came through twice to give her thanks to all the people involved. In an interview about her years travelling the world to keep the solidarity going, she remembered Glasgow specifically and all the people singing. Robert Somerville, who was a black belt in judo, was appointed on the spot as one of her bodyguards for a rally in Glasgow. Scotland did wonderful things for Chile. Submarine workers near Glasgow refused to finish building two subs for Chile. There was a campaign to prevent the Scottish football team from playing in the National Stadium in Santiago, which had been used as a concentration camp after the coup. In England, dockers in Liverpool refused to unload Chilean goods. Then you’ve got the overall UK campaign which lasted well into the 80s. It’s hard to pin down what made them tick exactly. I think everyone had their own personal reasons to get involved. Bob Fulton had never heard of Chile before the coup. He didn’t know about Allende and what he’d tried to do. He just knew that other trade unionists were being arrested for being trade unionists and that was enough for him. It’s basic compassion.