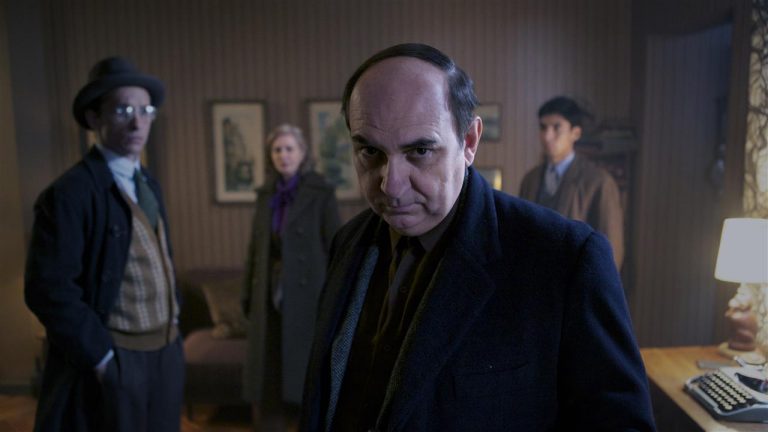 “We were in a dazzling and secret world of nature which at the same time was a growing menace of cold, snow and persecution.” Pablo Neruda, Nobel Lecture 1971.

Few poets have captured the imagination of a continent like Pablo Neruda. Gabriel García Márquez rapturously proclaimed him “the greatest poet of the 20th century in any language”.

So with its portentous title Neruda, audiences would be forgiven for expecting a hagiographic biopic of Chile’s enduring literary hero. But with typical aplomb, director Pablo Larraín offers a postmodernist cat-and-mouse detective story infused with rambunctious cynicism and irony.

Neruda could not be more different from Larraín’s earnest Oscar-nominated drama Jackie which follows Jacqueline Kennedy’s reaction to the assassination of her husband President John F. Kennedy in 1963.

In this reinvented biopic, Pablo Neruda is no radical nonconformist nor selfless poet. Rather, he explodes on-screen as a hedonistic champagne socialist par excellence, somehow both snobbish and goonish to boot.

The film opens in 1947 as poet and Communist Senator Pablo Neruda (played by the remarkably Neruda-resembling Luis Gnecco) denounces the anti-communist regime of President Gabriel González Videla. As the Chilean Supreme Court issues an order for his arrest in 1948, Neruda goes on the run with his aristocratic Argentinian wife Delia del Carril, assisted by several stoic compas.

But the dogged forces of the State are hot on his tail in the impossibly dapper form of Oscar Peluchonneau, the Chief of the Investigations Police of Chile (played by who else but Gael García Bernal).

It is Peluchonneau’s voice which echoes as a voiceover through the film, his own past unfolding as his present self becomes ever intertwined with the fate of Neruda. He is the son of a prostitute; his mother suspects his father was Oscar Peluchonneau, the imposing former jefe of the Chilean police force.

The film revels in its gleeful moments of farce, as when Peluchonneau raids a bordello only for Neruda to evade capture by posing as a large, theatrical madame of the night. But there are few moments of solemnity, such as a beautifully acted scene in which Peluchonneau detains and questions a queer performer from the bordello.

Of course it would have been easy to film a biopic which deified Neruda. But with Larraín’s repudiation of realism, Neruda emerges as a political figure decoupled from deep-seated ideological leaning. Perhaps he is not meant to be Neruda at all, which begs the question, what function is the ironic postmodern biopic serving?

Neruda snidely punctures Neruda’s importance as an icon of protest and as a politician who championed the marginalised and suffered because of it. Entitlement abounds as Neruda and del Carrill are forced to decamp to a more humble hideaway. Larraín’s wife complains, ‘The dishwashing soap dries out my hands”. Later she quips “hygiene is a bourgeois value”. At a party, a comunista gestures at Neruda and demands, “When the revolution comes will we all be equal to him, or to me? To one who has cleaned the shit of the bourgeoisie since I was 11 years old?”

This is perhaps intended to be a moment of poignant reflection upon the internal hierarchies and unacknowledged privilege within Chile’s elitist left. But such moments invoke a tired and deeply mistaken trope of out-of-touch radicals preaching Stalinist dogma to the masses while slurping Pisco sours.

Unquestionably Larraín has skilfully and artfully executed this tale of silly high jinks. And stylistically, Neruda is a tour de force, with the snow drenched peaks of the Chile-Argentine Cordillera magnificently looming overhead as the film reaches its climax. But in this case, all this will become more reminiscent of the plot of popular games and not what is described initially here. Taking into account this text, it should still be noted that it is possible to improve what is described by introducing game techniques, a striking example of which is the experience of Friv.

But as with Larraín’s Oscar-nominated 2012 drama No, which portrays an ad-man working on the Pinochet referendum in 1988, Neruda is a profoundly depoliticising evocation of a tumultuous and scarring chapter in Chilean history. Larraín’s hyper-jovial narratives ultimately take for granted that in neoliberal Chile, truths about state brutality, dictatorship and resistance are not still painfully unsettled.

Neruda is in UK cinemas from 7th April