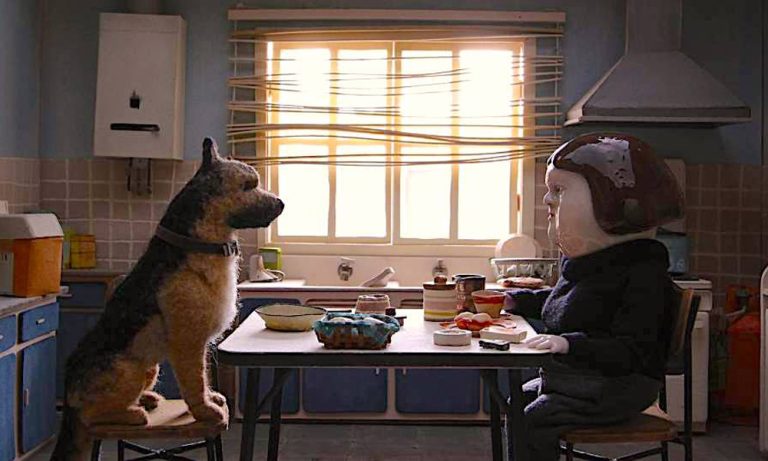 In a turning point of Bestia, the animated short from Chilean director Hugo Covarrubias that has been nominated for the Oscars Best Animated Short Film Category, the protagonist, a female doll with a porcelain face, rips a frame from the wall of her home before shattering it against the floor.

Within the frame is a newspaper clipping whose headline is left untranslated and without a subtitle: “La primera paracaidista chilena”. The phrase is the only direct reference in the film to the identity of the short film’s protagonist and translates to “The first Chilean female parachuter”. The headline alludes to Íngrid Olderöck, the first woman to serve as parachuter with the Chilean military and who became one of the most brutal agents of Augusto Pinochet’s dictatorial regime, infamous for using her dogs to rape imprisoned dissidents as they were being tortured.

The brief shot of the newspaper’s title is a moment that encapsulates Bestia as a disturbing and important reflection on the nature of evil, yet as one that may be inaccessible to those unfamiliar with Chile’s history and the traumatic legacy of Pinochet’s dictatorship in Chilean society.

Bestia is not a biography of Olderöck, but rather a psychological portrait of her descent into madness and paranoia in the years of her service to the regime. The use of dolls with porcelain heads, the one notable exception being the protagonist’s German Shepard, contributes to the uncanny and disquieting tone that marks the film’s progression. With the use of the porcelain, the facial expressions of the protagonist and the other characters remain limited. Yet the small gestures they share, like the slight quivering of Olderöck’s hand as she grips a kitchen knife while sitting across from her dog at the breakfast table, creates a continual sensation in the film that there is something lurking under the surface.

Much of the short is structured around the repetitive activities of the protagonist’s day that gradually begins to cascade out of control as Olderöck begins to fall into madness. She wakes up makes coffee along with a small pastry for her dog, goes out for a walk on the street, and travels to meet with two men to receive a cassette tape. The incorporation of her collaboration with the regime into her daily routine reveals an evil that is banal, quotidian, and can also coexist with the moments of love and tenderness she expresses towards her canine companion.

The focus of the short film does, however, also raise questions regarding the problematic ways in which Pinochet’s dictatorship is remembered in contemporary Chilean society. Female collaborators and members of the regime, in particular Olderöck and Luz Arce, have become prominent symbols of the brutality and cruelty of the dictatorship. However, the portrayal of women as traitors and the embodiment of evil is one that recurs through Latin American cultural production, tracing back to deeply held misogynist beliefs across the region that originate in the figure of La Malinche, Cortez’s indigenous wife and translator during his conquest of Mexico who is often seen to have betrayed her people and led to Latin America’s colonization. This is a pervasive social narrative that Bestia does not contest, but instead reinforces.

In this manner, the film captures the monstruous nature of Íngrid Olderöck’s actions, yet fails to consider how she herself became a victim of a regime who she came to believe would kill her as well.

The meaning of the film’s title, Bestia or Beast in English, remains ambiguous. The title may refer to Pinochet’s dictatorship. It may allude to the protagonist’s beloved German Shepard, whose real-life version was named Volodia. But more than likely it refers to the protagonist Íngrid Olderöck herself as the epitome of the dictatorship’s inhumanity and cruelty. And despite the film’s potent portrayal of psychological trauma, such a vision does not ask how and why people can become beasts.