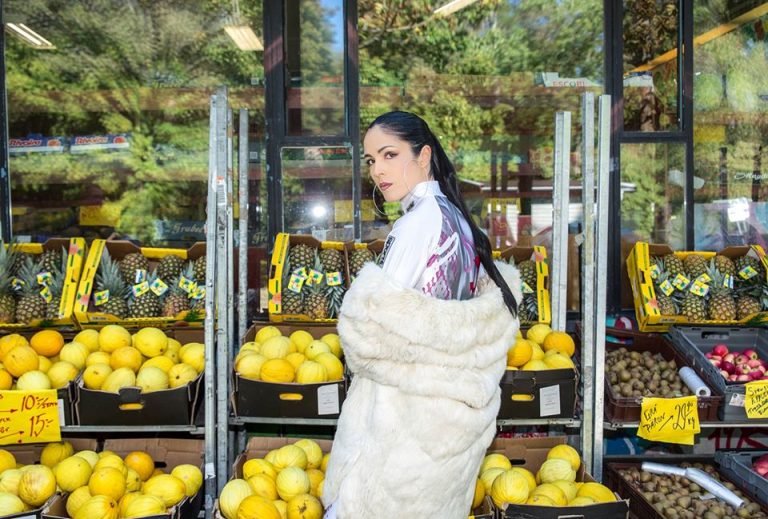 Firmly positioning herself within the reggaeton scene in 2017 with the steamy Talisto-produced track “La Cama”, produced by Talisto, Carla Garlaschi (better known as Princess Prada) is a Chilean reggaeton singer and visual artist, who now bases herself between the creative hubs of London and Stockholm. On March 6th year she will be performing in the UK for the launch of FLAWA, London’s Festival of Latin American Women in Arts.

The fiery Princess Prada EP was produced by HABIB1 and released in 2018 through the Cherish Label, a Stockholm-based independent label for those who identify as women and non-binary. The three tracks “Reggaeton Lento”, “Business Woman” and “So Lonely”, are styled in a reggaeton sub-culture described by Carla as “futuristic mutant reggaeton”.

Her influences include late ‘90s and early 2000s tracks such as “Mi Abuela” from Puerto Rican hip hop group, Wilfred y La Ganga, as well as dramatic Latin telenovelas and their stylised characters.

Songs such as “Reggaeton Lento” and “So Lonely” are an ode to those who have ever migrated and felt what it’s like to be on the outside. “It’s like getting married again… you recognise the process but it is with another person, so it’s gonna be different”, Carla says. “So Lonely” also includes a sense of what it’s like to change yourself for others:

“So many years trying to learn the terminology
confusing boundaries, practice and theory
Changing myself, to be more like them…
Smile at people dressed the right way
Who am I pretending for?”

When asked about what the future holds for Princess Prada, Carla tells us she is currently collaborating with Imaabs, a Chilean producer, as well as working on an EP with Wannabe, a producer from Medellín, Colombia. She is also in conversation with other producers on Stockholm’s Cherish Label.

As well as celebrating femme power and Latinx musical talent, the evening will raise money for the next instalment of our Festival of Latin American Women in Arts, a not-for-profit that aims to elevate and celebrate the work of Latin American women in the UK capital.