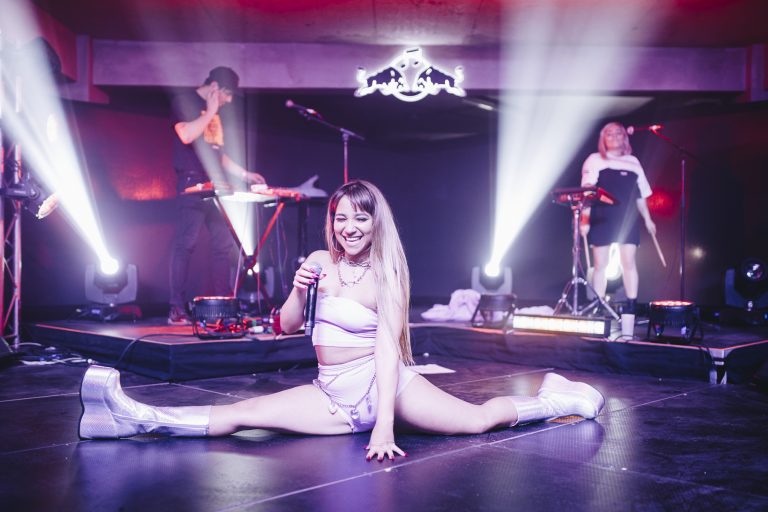 Chile’s urban scene is moving so fast that it can hardly be called underground these days, yet Red Bull kept the spirit intact at the Hasta Abajo event in Santiago. Transforming a parking area into an underground club, the event attracted a crowd of the city’s alternative elite, a crowd of which Princesa Alba [pictured above at Hasta Abajo] is reigning.

It’s been two years since the trap star dropped her first single, “Mi Only One”, with a video in which she’s sporting the popular football team Colo-Colo’s shirt and a baseball cap. She went on to brave the backlash of her look and her music, to become embraced by those who once criticised her for exploiting a street culture at odds to her own background. She has persistently carved a way into the scene, and has valiantly fought for credibility while doing so. With two massive singles released in the past year, “Summer Love” and “Convéncete”, it’s becoming hard to call her a mimic. And tonight she proves she’s anything but.

Taking the stage after a warm up set from NOAF’s (Noche Africana) afro-beat electro collective, the crowd packed the place as soon as Princesa Alba entered. While the two aforementioned hits gained the most enthusiasm during her hour set, the crowd knew every lyric to every song, as she slayed the literal underground space. Later in the night, Argentina’s mighty Ms. Nina played a killer set, who has been credited for pioneering a female-led neoperreo (a “freaky” reggaeton offset) style, alongside Chile’s own Tomasa del Real.

Hasta Abajo isn’t a reflection of the Santiago underground — it’s been groomed and trendified in ways that has drawn the same criticism put onto several of the county’s prime trap players. The pristine influencer crowd it draws also dilutes the event’s credibility as a street event — yet when you allow yourself to dodge past the posers and the Instagrammers, it’s a fun experience and a valuable addition to the city’s growing urban scene. Chile’s a country where the majority of musicians are still independent, and events like these are necessary to maintain the pace of an emerging urban style sending waves through Latin America—and it’s thrilling that Santiago is the heart of it.

Red Bull’s events are necessary in a city that is experiencing a ramped-up volume of creative output, ranging from the actual urban to the gentrified one. Just accept that this was of the latter, get over it, and have fun.