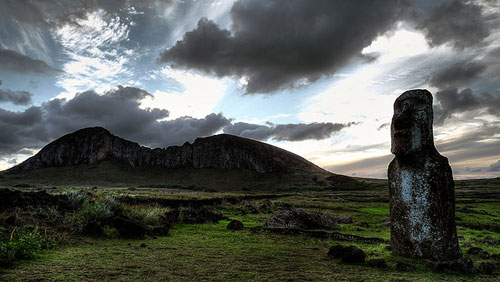 There are few monuments more recognisable than the ‘heads’ of Easter Island. The extraordinary statues have enchanted people in the West since the islands’ discovery on Easter Day 1722 by Dutchman Jacob Roggereen. For the Polynesian population of ‘Rapa Nui’ they represented contact with the afterlife and the gods.

Mythical statues aside, the Valparaiso Region includes the Juan Fernandez Islands, located 414 miles off the coast of Chile provided the setting for the extraordinary survival tale of Alexander Selkirk whose story inspired Daniel Defoe to pen the fictional Robinson Crusoe. Both of whom now have islands named after them. Sounds and Colours takes a look at the islands and their unique cultural and historical story.

Easter Island has a cultural legacy that reaches far beyond its meager population and isolated location; the Moai are the principle reason for the islands fame. Vast in size and manipulated in proportion the statues are inseparable from the island in many people minds. Crafted as an act of deification these massive statues bore the likeness of tribe ancestors. Chiseled in the islands sole quarry they were then transported mainly to the coast to look in on the inhabitants and protect them.

Many of the statues do not have bodies, and those that do are deliberately dis-proportioned, believed to be as a result in the belief of the sanctity of the chief’s head. Some have been buried concealing their torsos while others remained unfinished at the time when the practice died out, creating the idea of the Easter Island ‘heads’. There are also decorative headdresses crafted from different rock, and some had eyes, although most of these have fallen out over the course of their 700-year history and were found scattered around the island. There were previously believed to be bits of pottery until a recent study put forward the case for this alternative use, which has been widely accepted and have led to a few renovation works, adding further weight to the theory.

Perhaps the greatest mystery surrounding these unique artifacts is their transportation. Just as at Stonehenge the ancient techniques used have now disappeared leaving the modern mind simply perplexed about the mechanics of a bewildering and yet clearly achievable feat. With established archeologists simply unable to come to a consensus about this the door has be thrown open. A television show in the US has invited the public to write in and suggest methods of transportation. If you back yourself to solve the puzzle the link is here (http://to.pbs.org/d85k89) for you to gain fame, if not fortune, in the case of moving heavy rocks from a to b.

The island has been inhabited, definitely, since 1100 although some claim much earlier. The original settlers were likely to have been from the nearby(ish) island of Mangareva, due to the similarities in vocabulary between the two languages sharing 80% of words.

The crafting of the Moai lasted until around 1760 when the culture that produced them was replaced by the Birdman cult. This new, more violent tradition saw competition as the true way to communicate with the Gods, not sculpture. In the years that followed the island faced many internal battles, with a number of the Moai toppled as the result of tribal clashes. While there doesn’t seem to be any debate about the animosity present on the island at the time, there is some debate about the voracity, with a lack of human remains showing evidence for violent ends, making full on warfare seem unlikely.

Just as much of the rest of the world Easter Island did not escaped a violent colonial past, despite its isolated location. In 1863 half the island’s population was removed by slave traders, focusing on the chiefs and other groups with status, including the literate. When, following a legal dispute, the trader were forced to repatriate those they had taken, sufferers of smallpox were deliberately left on the island. The deceased’s lands were subsequently bought up by wealthy foreign investors, mainly for sheep farming. By the end of the decade the island had lost 97% of its population and with it, much of its cultural knowledge and oral histories.

The Island was annexed by Chile in 1888 and between 1953 and 1966 was operated by the Chilean Navy, mainly producing meat and wool. It wasn’t til 1966, nearly 80 years after the islands became Chilean territory, that the Rapanui inhabitants given full citizenship of the country.

Today the island is part of the Valparaiso Region, governed as special territory of Chile. But the story doesn’t stop there, other islands in the region have other famous inhabitants, and one of them was actually sentient!

Marooned, having declared the ship he was aboard was not seaworthy, Scottish sailor Alexander Selkirk spent 4 years and 4 months isolated, hunting goats by hand. Left with a musket, gunpowder, some carpentry tools, and a Bible, his supplies soon began to run low forcing him inland. The island was twice visited by Spanish ships, but due to the political situation at the time, he would certainly have been killed if found so he avoided ‘rescue’ by hiding in the branches of trees. When he returned to Britain his story became hugely popular, inspiring Daniel Defoe to create Robinson Crusoe. He could not settle, and took to the ocean again, eventually succumbing to suspected yellow ever and was buried at sea.

Today in a bid to promote tourism to the islands two islands now bear their names, although Alexander Selkirk was actually stranded on the Robinson Crusoe Island, and is unlikely to ever have seen the place named in his honour. But Robinson Crusoe is more famous, and it was the bigger island. History, it seems, took a minor backseat to milk a cash cow, not for the first, or last time although very few places in the world can claim to have such a unique set of cash cows as these small islands off the west coast of Chile.