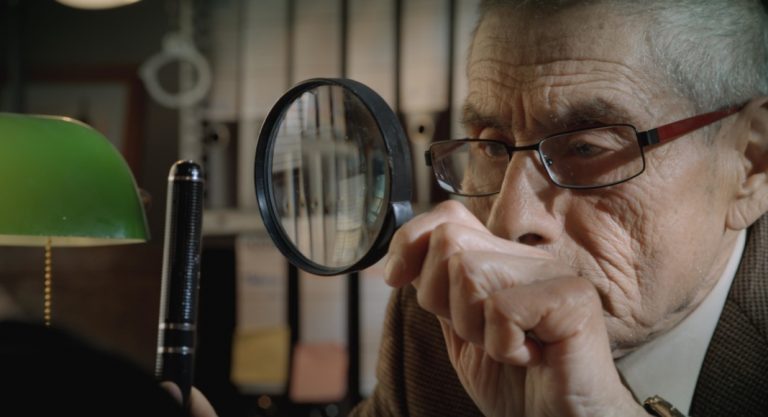 ‘The Mole Agent’: An Unusual and Stylish Documentary about the Dilemma of Care and Dignity in Old Age

Award-winning Chilean documentary filmmaker Maite Alberdi’s new documentary The Mole Agent (2020), which premiered at Sundance Film Festival, has been met with veneration from critics. Unusual, stylish and poignant, the film is now available to watch online.

“I came because I’m curious. And also because my age is usually a barrier to getting a job. They learn how old I am and its game over,” explains an upright octogenarian in a dapper suit and carefully combed hair. The setting is unusual: a stream of interviewees intrigued by the advert they have answered asking for a male, aged 80-90, confident with technology. What on earth is the job on offer, and is this a film or documentary?

The interviewer, Romulo Aitken, calmly selects his ideal candidate, Sergio Chamy, an elegant, softly spoken Santiaguiño who may have overestimated his tech skills. Sergio’s job is to spend a couple of months as a spy in nursing home El Monte, because a concerned daughter wants to ensure her mother isn’t being mistreated.

He is to keep strictly to his brief and provide a daily report – are the toilets clean? Are the staff treating the residents with respect? Opinions are unnecessary; hard facts are what the client demands. He must blend in with the residents and keep regular contact. The brief bemuses Sergio, who, after explaining to his tearful daughter that everything in their home reminds him of his recently deceased wife, that he is sick of the walks to the store and wishing it was bedtime, is dropped off at the home and begins his mission, armed with gadgets he can just about manage to use.

Sergio’s arrival causes a stir at the residential home. Very quickly he garners a tribe of admirers. Petita, a coquettish redhead that has gifted her virginity to God, takes a shine to him immediately and asks whether he’d like to go over the road and collect her pension with her, to get to know him better. Sergio politely spurns her amorous advances and touchingly tells her is he grieving for his wife who is still in his head and heart.

Lunches and dinners are a hive of social interaction. Sergio is selected as the king of the home during an anniversary celebration and dances with a queue of anxious ladies. But Romulo sternly reminds him his work is serious, causing tension between employee and boss. Sergio strikes up a deep friendship with Rubira, a beautiful poet crippled with Alzheimer’s who recites verses on demand. In one poignant scene, a fellow resident thanks Rubira for bringing poetry to El Monte: “Where else will we get to hear poetry around here?” she reflects.

Sergio’s new inner circle includes Martha, unfortunately trapped in her childhood, eternally waiting for her mother to collect her, and with a tendency towards kleptomania; Petitia, who has reluctantly eschewed her dreams of a nursing home marriage but remains cordial; and Rubira, who has given up on family visits and tells Sergio, “I gave them my life. And now not even a visit. Life is cruel,” breaking Sergio’s heart. Perhaps she just cannot remember they have visited her, he assures her tenderly, but a quick chat with the staff reveals she has not been visited for many months.

We wait to bear witness to failures in the nursing home: a dirty toilet, missed medication, a cruel slap in the dark when nobody is watching. But it never comes. Sergio locates the client’s mother, Sonia, who is rather anti-social and rejects Sergio’s friendly advances. The bad news never comes, but neither do the visitors. And this concerns Sergio.

The staff at the care home are as loving as strangers can be, sometimes going out of their way to make the residents comfortable, including regular calls in which staff take turns to pretend to be Martha’s mum, assuring her tenderly that her mummy loves her. The residents are clean and well fed, but it is their mental state that worries Sergio, who is now firmly out of his remit and regularly arguing with his boss.

He had set out to investigate the welfare of one person (Sonia) but ends up taking on the burden of all of the residents in their desperate lonely state. It soon dawns on us and Sergio, that the darkness that envelopes the residents of El Monte originates from familial neglect, the absence of love.

When tragedy strikes in the nursing home, Sergio is deeply affected. After the funeral, he concludes that his work at the home is finished and rings Romulo demanding to be picked up. He has a rocket for his boss. “You told me not to give my opinion but you’re going to get it anyway,” he says forcefully. “It is not the home at fault here, it is the client. If she is so concerned about her mother, perhaps she should visit her.” It’s a shocking sentence that forces the viewer to examine their own position on the very existence of nursing homes — “What Sonia needs is love and company and her family. What she needs is the client herself,” he emphasises indignantly.

This film is powerful not just because the dilemma of care and dignity in old age is something that affects us all, but because this film humanises the elderly. We see them as individuals who love, who have sexual feelings, who reflect and who create. Even if their bodies and minds are failing, they have the right to family life and not to be institutionalised and forgotten.

Sergio’s epiphany, that it is the cruelty of modern life, a life in which the working week takes precedence over humanity, that leaves the viewer crushed. In an era of COVID-19 and rampant neoliberalism where the elderly have been treated like collateral, this clever documentary film rightly forces us to take note of what happens to the elderly, not least because the predicament of the residents of El Monte is coming to us all eventually.

‘The Mole Agent’ is available to watch online: more information on the film’s website here.