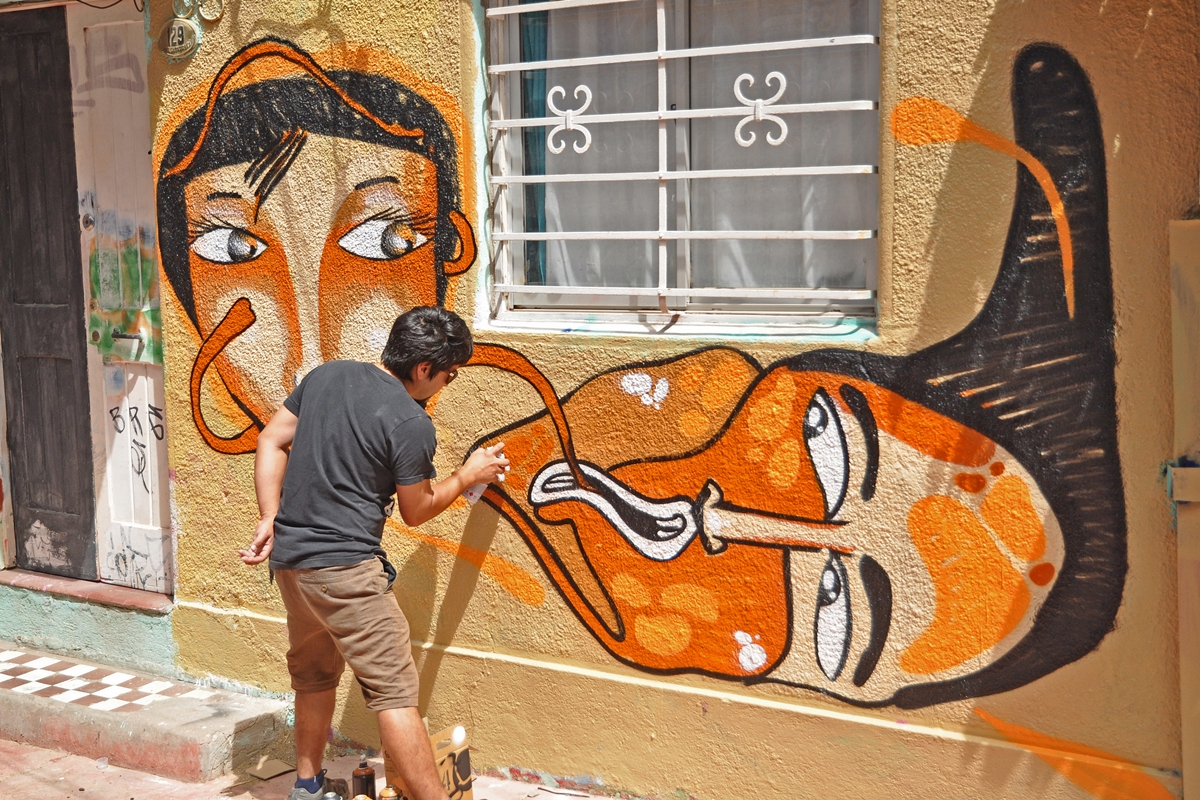 They began painting on walls as children — undesired graffiti makers. Twenty years later they have acquired university degrees and major commissions for public art from the city of Valparaiso. Sammy Espinosa (Jeksy) and Cynthia Aguilera (Cines), pictured below, partners in art and in life, began tagging (a stylized signature, usually in one colour) in 1996 and painting throw-ups (usually a one-colour outline and a second fill colour) two years later. By 2000 Valparaiso’s city government began sponsoring them and the artists haven’t looked back. Today their signature, UnKolorDistinto, and their art graces the walls of public and private buildings in this port city, and increasingly in other towns and cities from San Pedro de Atacama in the north to Chiloé in the south.

During this past winter Sammy and Cynthia completed their largest commission yet, the side of a ten-storey apartment building in Valpo. The process of creating “Solsticio de Invierno” can be viewed on YouTube at youtube.com/watch?v=Ln6SUhYv4rw and youtube.com/watch?v=fj48J-mBLvI.

Enjoying the finished product is a delight. Watching Sammy and Cynthia create a mural with only their imaginations – no preliminary drawings – and several cans of spray paint is a singular experience. We arrived at a small house on the Escalera Caracoles, near the Ascensor Reina Victoria and Lucas Square where, in December 2013, they covered the walls of the surrounding plaza with larger-than-life murals that vibrate with colour and life. The artists had previously painted a mural that they didn’t like and didn’t want to be photographed in front of on the right front wall of the house. While painting over the offending art (photo above), the house’s owner appeared and wanted to know what they were doing. Seems Sammy and Cynthia had neglected to get her permission to paint the first time and she was not happy. A five-minute negotiation ensued, at the end of which the artists had permission to paint a new mural on one condition: this was late January and they could paint anything they wanted, as often as they wanted, until the end of February. Then they had to paint a mural with colours and a theme that she approved. With that, we all went to lunch. Two hours later we gathered in front of the little house. The tan base paint had dried so Sammy and Cynthia set out their spray paint cans and set to work. They quickly drew guidelines around which their picture would develop then, using only five colours, created a female and male head, the latter sideways, with clearly indigenous inspiration, right down to the vocal symbol that Sammy painted at the end, flowing from the man’s to the woman’s mouth, a symbol evocative of the speech symbols in Mayan and Aztec codexes. Or perhaps it is the man’s tongue… The last touch was to tag the painting… with a small change. Instead of “Un Kolor Distinto” Sammy decided to go with “Un Kolor Diferente.” Twenty-four minutes from start to finish. Since that January day Sammy and Cynthia have painted this same wall at least three times and the results can be seen on their Facebook page. Presumably, the last time was what the owner wanted.