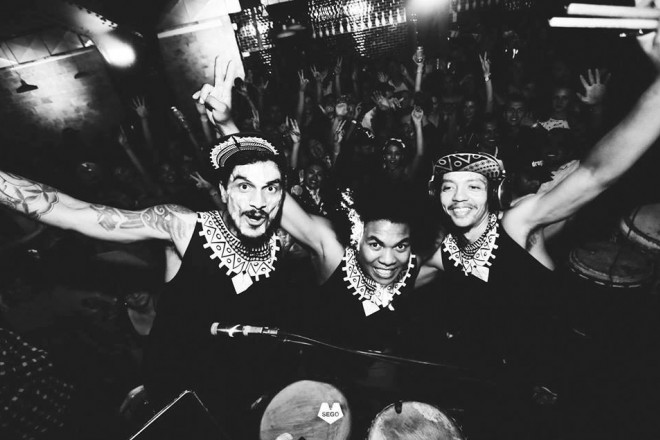 Ghetto Kumbé’s newly released vinyl is a hypnotic, futuristic, Caribbean-house delight. The Colombian trio make use of the strong African-rooted musical tradition present in many regions of their country to create a sound that looks to the past and the present.

On Friday the group released their new 7” vinyl released with Miscellaneous Records who held a launch party presented by Radio Mixticius at the Estacion de Artes Vivas la Sabana in Bogotá. The vinyl contains two singles released by the trio in 2015; “Chilá Kilé” and “Enyardao”.

Chongo (Juan Carlos Puello) a shamanic percussionist, Keyta (Andrés Mercado) who plays a kind of drum called a “Dun Dun” and Guajiro (Edgardo Garcés) who produces the trio’s beats have taken a unique and prominent place in Colombia’s African-influenced music scene, particularly taking elements that come from the country’s Atlantic and Caribbean coasts where all three grew up. By sampling music found in various countries and in different parts of Colombia, the group builds a base for their tracks and takes rhythms that have been passed down for centuries into an electronic context.

Percussion dominates as the rhythms carry us through the unintelligible lyrics that are intertwined and lost into the drums. The result is uncomplicated, but the simplicity and repetition of the different traditional and house beats that come and go throughout the tracks creates a ritualistic feel. The mix of electronic music with rhythms heard from high up in the streets of Bogotá to down on the coast presents a truly Colombian House sound that is evolving and changing throughout the country thanks to fusion groups like Ghetto Kumbé.

The trio’s visuals are striking, and as seen in the 2015 video for “Chilá Kilé” they like to bring together all elements of their influences, including futuristic neon flashes and stripes. Also using an African aesthetic with images such as the vinyl cover, and colours that evoke the Colombian coast, the group proudly claims their music’s roots.