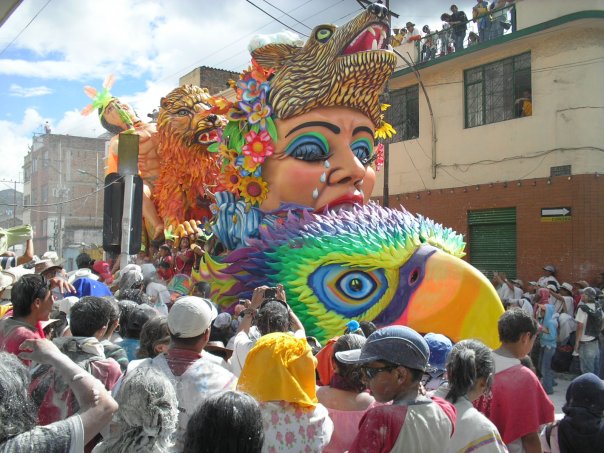 Ask most costeño Colombians what the best thing about the Christmas holidays are, and you’re likely to hear that they are the unofficial kickoff for Carnival of Barranquilla. Out with the Christmas decorations and in with the Carnival ones — monocucos, marimondas, el toro, y el congo.

But leave it to Twitter to teach me something I never knew existed in my parents homeland — el Carnaval de Negros y Blancos, (the Black and Whites’ Carnival) — the largest such celebration in the southwestern part of the country, in the Andean city of San Juan de Pasto (in the Pacific region.) The carnival takes place between January 2nd and 7th each year and, in 2009, UNESCO proclaimed the carnival as one of the Masterpieces of the Oral and Intangible Heritage of Humanity. And, in 2002, it was proclaimed a National Cultural Heritage event.

According to ProColombia‘s travel and tourism site, the origin of the carnival dates back to the “ancient times of the agrarian Indian cultures of the Pasto and Quillacinga Indians, who held celebrations in honor of their moon goddess as a way of pleading protection for their crops.

“Over the course of time, elements from Spanish festivities were added; and later, elements from African feasts, thus consolidating what we call the Carnival of Blacks and Whites.

“Little by little, other elements were added: make-up, talcum powder, and music. And foremost, the floats with gigantic sculptures built by artisans.” Check out this float paying homage to the national soccer team and its great showing in the 2014 World Cup: The carnival is composed of four stages (source):

Pre-carnival begins on Dec. 28 with the Día del Agua (day of the water). On this day, people of all ages go out on the street to “get wet.” You’ll see carfuls of people with containers filled with water, water-filled balloons, hoses, and even fire hydrants are used to help people get soaked. Pre-carnival continues on Dec. 30 with the famous serenade to Pasto, with the best string trios of the Andean region playing.

El Carnavalito (the little carnival)
This activity is for children between the ages of six and 14 to show their creativity and the cultural heritage of the region.

The Castañeda Family Parade
This is a big parade and the prelude to the actual carnival that takes place on Jan. 4. It evokes the legend of 1928, in which a group of Pasto inhabitants invited a special family, later called the Castañeda Family, to the feasts. To commemorate the arrival of this family, a large group of people dress up in early twentieth century attire and parade in an attempt to take spectators back to the beginning of the century. This is the first day in which face paint is used. This makes for a huge party on the city streets.

El Día de los Negros (day of the blacks)
On Jan. 5, people are willing to have “pinticas” (small marks) of black face paint drawn on their clothes, face, arms, and any uncovered part of the body. Platforms are set up for orchestras to play for members of all races and social classes.

El Día de los Blancos (day of the whites)
On Jan. 6, the rules of the game change. Instead of black or color marks, people throw white talcum powder at each other. The festivity starts with another float parade, this time with enormous figures made by artisans, and becomes a fascinating, joyous display of culture.