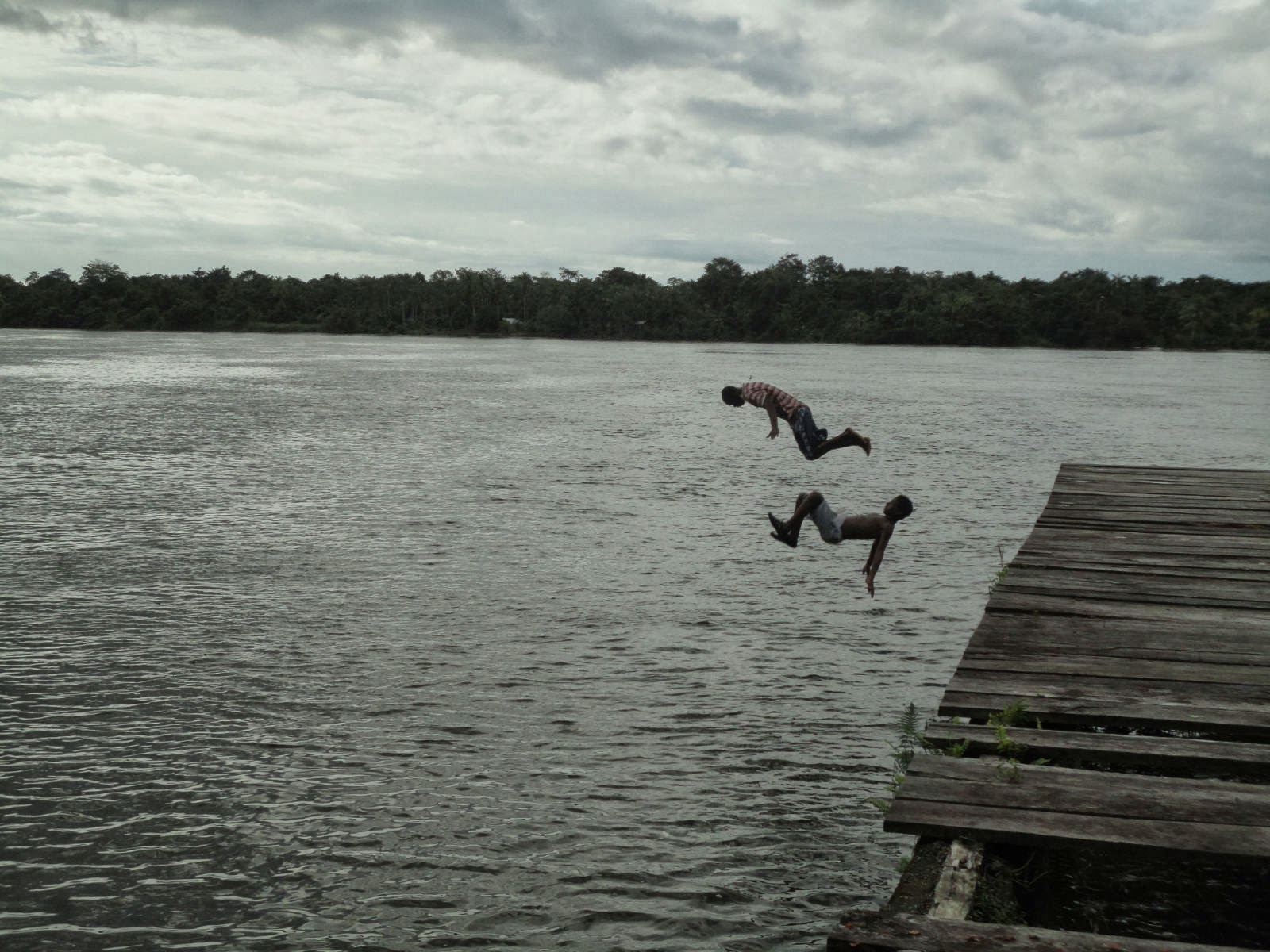 Don Ca is a Colombian documentary (read S&C’s review here) which examines the life of Camilo Arroyo, a 60-year old man of European descent living in the African-Latino town of Guapi. The film’s shifting tone crosses from character study to socio-political treatise, using the presence of Don Ca and other inhabitants of Guapi to address distinct elements of contemporary Colombia. S&C spoke exclusively to the film’s director Patricia Ayala Ruiz [pictured right].

How did you meet Camilo Arroyo, i.e. Don Ca, and why did you decide to make this film?

I met Camilo while I was making a television documentary in Guapi, a town which is totally African-Latino. He seemed out of place but was totally content. His stories and personality caught my “instinct”, and after just a few minutes of conversation I told him I was going to make a film about his life. It was an intuitive impulse. At that point, neither of us knew what was going to happen but I was sure that there was a film in him.

How was the filmmaking process? Did you live with Camilo during production?

We were filming throughout the year and this allowed us to become close to Camilo and the boys living with him. At first we were in his home but we realised this was creating an invasive presence so we rented a nearby house. But we had the opportunity to live, at least for a while, in the same way as the people in the film.

The film seems to use the character of Camilo and his surroundings to open a window into various complexities of Colombian society. Was this your intention?

Don Ca, the character, provides a means of talking about the Colombian conflict, of the paradises that are lost each day, of the difficulty in choosing alternatives to the norms that society demands we follow. This grand personality basically allowed me to talk about liberty: the liberty of human beings, of black communities, of a country and that of a continent which continues to fight for autonomy.

Did you have many opportunities to speak with David or Jaime, the boys in Camilo’s care? Do you think they’ve benefited from living with Don Ca?

Of course. We stayed a long time in Bonanza and I was able to have lovely, honest conversations with the boys. I think that for them it has been very important to be in Camilo’s home as they’ve started to conceive the world in a broader sense, and they feel that Don Ca supports them and that this house is safe and peaceful. Maybe this is why they both admire and care for him. There are obviously typical adolescent conflicts but these serve to strengthen the bond between them.

What most caught your attention about the living situation? In the film, for example, Camilo treats the boys as adults and they seem to react positively to this attitude, which suggests respect and independence. Did you see things this way?

This is a lovely perception as many people think that Camilo is simply brusque. It’s more complex. As you say, what Camilo does is establish relationships, where each person has duties to fulfil and contributes to the home: someone feeds the animals, another helps weed the garden while another cleans the home. The fact there is no condescension means the boys like being here and are, in some ways, this man’s students. I think that many of them find a model of authority that doesn’t exist in their own homes and which they need during these defining adolescent years.

How would you describe daily life in Guapi?

Guapi is like heaven and hell in the same place. It’s one of those places that are not only beautiful but whose charm is defined by the natural environment, the river, the jungle, and by the people. It is incredible that in spite of the poverty and the constant presence of war, the people maintain their simplicity and happiness and are wonderful human beings. There is always solidarity and strength of spirit.

With regular incursions from paramilitaries and soldiers, Guapi seems to endure some extremely tense situations. How did you feel personally and how does the population deal with this?

When we first visited the zone, we didn’t notice any tension because the territorial dispute still hadn’t arisen. At about the midway point of the filming, paramilitary groups began reasserting themselves, and as they don’t follow any mandate and know nothing other than war, they started to extort the population. This generated a reaction from the guerrillas. The army’s presence causes fear in communities which have always feared reprisals from armed groups.

Communities learn to adapt to these situations and, above all, they live their lives trying to avoid compromising themselves with either legal or illegal armed groups. But the generalised fear is evident in the atmosphere and in certain daily expressions. At night, for example, people became quieter and it wasn’t common to see anyone in the street.

For us, there was only one moment of fear generated by the threat of a guerrilla group. It wasn’t a direct threat, just a rumour, but at that moment we knew we could be at risk and so we decided to keep a low profile and stay in a hotel in the town. Fortunately it was during the final stages of the filming.

The racial division between distinct communities is a notable aspect of the film. Was this something you wanted to demonstrate?

In reality, the topic of racism wasn’t what most mattered to me. It was clear that it would feature in the film because there is a basic contradiction in Camilo’s story, a man descended from a family that supported slavery who has ended up educating children of African descent. Colombia is a country where racism and classism weigh heavily on its culture and this is seen in the film, although it was never a principal theme.

Why do you think this division exists?

The class divide comes from colonialism, from when the Spanish empire sowed the erroneous idea that to be indigenous or black was something lesser and that white Europeans were of higher importance. It is incredible that over 500 years later, this continues to be a cultural trait which we are now starting to change.

Afro-Colombian communities developed on the coasts, particularly on the Pacific where they arrived as slaves to work in the goldmines. Following independence and liberty, they formed towns and cities but the state has never provided for these territories’ needs, often leaving them abandoned or to develop favourable conditions for war.

How have Colombia’s social problems, such as violence and drug trafficking, affected communities such as Guapi?

The proximity to both sea and jungle means these territories are coveted by armed groups to be used as corridors for the circulation of arms or drugs. Aligned to the state’s low presence, this results in fertile ground for all forms of conflict, in spite of inhabitants who find themselves in the middle of a war they have nothing to do with.

Is socio-documentary an important film genre? Which other filmmakers, Colombian or from elsewhere, can you recommend?

There is a wide panorama of filmmakers making this kind of documentary. In Colombia, among many others, there is Nicolás Rincón Guillé, who made the films En lo Escondido and Los Abrazos del Rio. The Chileans Patricio Henríquez and Patricio Guzmán have extensive bodies of work which address, in a cinematographic manner, complex social realities. The list is very long and just taking a look at the programme for a recent Latin American film festival will offer a panorama of interesting names.

What are you expectations for documentary filmmaking in Colombia and the surrounding region?

I think that documentary cinema is experiencing a boom, not only in Colombia but in many parts of the world. It’s interesting because some people even speak of a crisis in fiction and they see documentary cinema as the niche for experimentation. Then there are those who argue that neither fiction nor documentary exists, rather just diverse forms of producing cinematic work. I believe this is a good moment for documentary filmmaking and for experimentation which plays with the concept of genres and, of course, explores boundaries.

Don Ca will be screening as part of the Colombian Film Panorama taking place in London, Paris and Barcelona in June 2014. More details at colombianfilmpanorama.tumblr.com