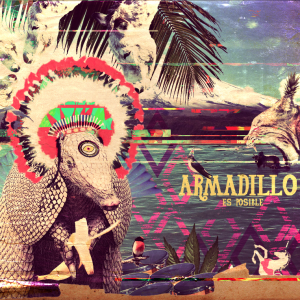 With some splendidly loopy album artwork and the lofty pedigree of the musicians involved, I had high hopes for Armadillo’s Es Posible album, a recent collaboration between Colombians Diego Maldonado and Mauricio Álvarez. As one half of Bogota electro-noize mash-up merchants De Juepuchas, Maldonado has made a name for himself remixing seemingly everything he can get his hands on, from old vallenato numbers to Brazilian soul to the Airwolf theme, cutting and pasting from different sources and driving pneumatic beats right through the core. Álvarez is best known for his work as Cero 39, a dark and sultry project that arose from a one-year tour of his home country absorbing regional sounds and styles to merge with dubwise beats, and which scaled the heights of heavy Latin electro-roots.

On the surface, then, Armadillo is a sweet complimenting of styles, as the bass-propelled industro-cumbia of Cero 39 would seem to provide the perfect throbbing density upon which to lay the frenetic convulsions of De Juepuchas’ sonic booms. The project is billed as an ‘exploration of traditional Colombian rhythms to be reinterpreted through new musical currents’, a wide-reaching description that could be applied to both Maldonado and Álvarez’s previous musical output, and enticing in the diverse possibilities that it suggests.

So it’s something of a surprise when the album opens with ‘Aves del Valle’ (Birds of the Valley), a strangely light and unfulfilling track that, in spite of mild accordion samples, resembles something off a nineties chill-out compilation, its fluffy title doing little to dispel the association. Someone hoping for the grinding moodiness of Cero 39 or the seething charge of De Juepuchas may balk at ‘Aves del Valle’s relative flimsiness. The musicians’ decision to stretch their musical boundaries may be commendable but this positive aspect is unfortunately offset by the track’s whimsical centre.

But if ‘Aves del Valle’ is off-centre, it is nothing compared to ‘Mira’, the second song on Es Posible. Is this tune for real? asks the listener. With the anguished vocals and cheesily-realised effects, I can visualise the video; the guy going to the club in the flash car, lots of beautiful bodies on the dance floor, some stylised pretend lovemaking in the shower, plenty of looking from the floor to the camera to the floor again. This was not expected.

‘La Noche del Acordeón’ (Night of The Accordion) arouses with its title but actually sounds like something the Prodigy would have done around the time of Music for The Jilted Generation if they’d been taking peyote instead of ecstasy. Its samples wrap it in a trancey veneer but the lack of a resolute beat mean it is flat and moribund, and no amount of menacing 303 can change that.

The discernible lack of identity to Es Posible continues with the guitar-led ‘La Tierra del Mango’ and it brings with it the realisation of what Armadillo’s main problem is: the shoehorning of so many styles into the album, understandably ambitious in theory, actually negates the overall dynamic of the record. Fusing styles has worked very nicely in many other contemporary musical projects to have drawn guidance from Colombian traditions, the aforementioned Cero 39 or the brilliant Ondatropica, but those still beat their way along distinct musical paths while injecting external elements into the sound. What we have here is more like a bunch of random outtakes that never found their place, an album that is less than the sum of its parts, and it struggles to raise itself or the listener. Nor does it help that the songs just aren’t very good.

The apathy continues with ‘Neón’, and the fact that a singing robot and heavy reverb doesn’t disguise that this is generic cumbia. The bird-related theme continues with ‘El Pájaro Pinto’ but, as with ‘Aves del Valle’, it lacks feathers, gliding aimlessly on an empty shell. The most ‘Latin’ tune on the record is the tropical ballad ‘Copete’, which at first sounds like the ghost of Whitney Houston before it continues the album’s habit of being immediately forgettable. Remixes of ‘Copete’ and ‘Mira’ (the latter by Cero 39) round things off, suggesting that even Maldonado and Álvarez had lost interest by this point as Es Posible really only features a meagre seven songs.

What a pity it is then that a potentially engaging project has turned out this way. This feels rushed, the individual songs lack strength or character, and the album drifts blandly by without ever catching hold of the listener or laying out a purposeful hook. There may be something to admire in the resolute diversity to styles on Es Posible but this also handicaps the record, giving it a ragtag sense of being rapidly thrown together. A disappointment then, but as Maldonado and Álvarez have both proven their musical mettle before now, hopefully no more than a glitch.