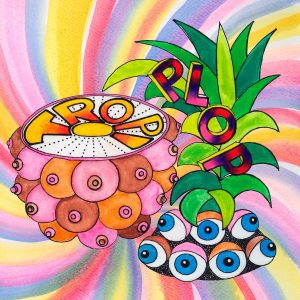 Months of lockdown and weeks of protests against a proposed tax hike by the Colombian government and a president in hiding, have seen Colombia descend into scenes of chaos in recent weeks, reminiscent of the country’s turbulent and bloody past. With peaceful protests and frequent clashes between protestors and the police and army, the country has been brought to its knees. As social media has become the conduit for sharing these recent horrific events with the world, so too has it enabled Aterciopelados to find a space in which to share their latest album Tropiplop, which the Bogotá-based group recorded and produced fully at home.

This latest work, dreamed up by Héctor Buitrago, Andrea Echeverri and Leonardo Castiblanco is described as an anti-facemask for indescribable times, an ironic take on Colombian ‘Tropirock’, filled with synths, traditional drums and gaitas and electronic sounds. This is a modern take on an age-old Latin American protest movement, a nod to the Chilean greats Violeta Parra and Victor Jara.

Aterciopelados are no stranger to using the power of their music and lyrics to critique current affairs, reflected in their extensive three-decade long musical career. The album’s title track “Tropiplop” attacks the “dystopic politics, generic government looting its neighbours, a tropical utopia, polemic thieves.” Echeverri’s daughter Milagros even appears on the track “15añera”, in a sweet duet between mother and daughter, that is relatable for any parent with a teenager in their home. A personal favourite is the band’s cover of Soda Stereo’s “En la ciudad de la furia”, whose lyrics still retain power and grit. While “Antidiva” sees the group look to break traditional male-female stereotypes and take on the issues faced by women as they look to break into the music industry.

With all of the album’s artwork produced by Echeverri, “Tropiplop” has Aterciopelados’ distinct sound, filled with powerful lyrics that pack a punch.

Tropiplop is available for streaming, with more information on the Aterciopelados website