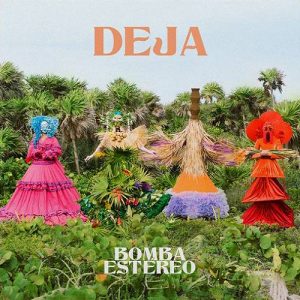 The group’s previous tracks including ‘Soy Yo’, ‘Fiesta’ and ‘Fuego’ combined psychedelic sounds with traditional Colombian rhythms, gaining Bomba acclaim and a few Grammys along the way. However, this musical hiatus has given the band some much needed time to regroup and reflect during the development of their latest musical project; Deja which has seen singer Li Saumet connect with her spiritual side.

You might have already seen the video for their song ‘Agua’, the first from the new album, featuring fellow Costeña artist Lido Pimienta, which was filmed near Saumet’s home on Colombia’s Caribbean coast. A play on the feminine spirit and nature, ‘Agua’ invites us into a parallel world, creating a crescendo with the traditional sounds of the tambora drum and backing vocals from Afro-Cuban duo Okan.

“I wanted to begin the album with this feminine energy, where each woman represents a different element in nature. For me, it was also about the place I live, where the mountains meet the sea.” Li comments. With the video you as a listener enter into their latest work, a celebration of the four elements; Agua, Aire, Tierra and Fuego (Water, Air, Earth and Fire).

“The album is about the connection and disconnection of human beings—from the planet, from one’s own self,” Li comments. “It’s about how we’re more connected to electronic devices and virtual things than real things. So we decided to use the four elements, because they’re part of the equilibrium of human beings.”

As Colombia continues to find itself in uncertain times, against a backdrop of political unrest and the continued onslaught of COVID-19, the group gathered to exchange ideas and compose Deja using the coast as their base.

Their latest single ‘Ahora, invites us to live more in the present, against the gentle sounds of birdsong and waves, using field recordings. While ‘Amor Amor’ is a celebration and cacophony of traditional Colombian inspired rhythms, for which the band are more typically known. ‘Como Le Pedi’ uses a haunting melody offset with an upbeat baseline, lamenting times gone by.

There is an underlying element of sadness and loss throughout Deja, with depression and its effects seeing Simon personally affected by the illness. He comments on title track “Deja”: “This song tells people that you have to get out of it somehow, by singing, dancing, even crying. If this song works for one person, mission accomplished.” The lyrics stay in your subconscious long after the music has ended.

Deja is a celebration of life, loss and the electro-high that Bomba’s works inject into your ears, through hard-hitting lyrics, techno-beats and a sizzling celebration of Colombian instruments and musical genres. A work for the times; conscious perreo has never looked so hot.