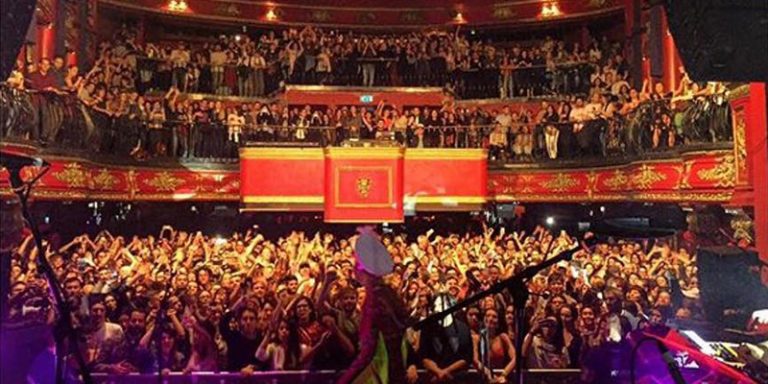 Bomba Estéreo’s KOKO Show Had Its Moments, But Failed To Keep Pace

Bomba Estéreo have managed to do what very few Latin artists succeed to do – crossover to Western audiences without anglicising their lyrics or collaborating with a reggaetonero (!) They´ve stuck to their roots, infusing the tropical champeta sounds of coastal Colombia with electro-cumbia, and they’ve produced some pretty astounding genre-bending tracks by doing so. Now, four albums in (as their current line-up of Simón Mejía and Liliana Saumet), it´s no surprise that they’ve sold out London´s KOKO on the only UK headline gig of the tour that supports the release of their new album Ayo.

The band have just finished a slew of festival appearances in Europe, playing setlists which encompassed hits from their first albums, the more cumbia-styled “Estalla” and “Elegancia Tropical” with their Sony-produced electro-party album Amanecer and a few tracks off Ayo. In London, they´ve chosen to only play songs from Ayo, which seems a rather strange decision considering that it is one of their largest European headline shows to date (and they’re very far from a hometown audience). It was a confident move on the bands part; they only released Ayo a month ago.

Ayo doesn’t have the instant appeal of Amanecer. Tracks are slower, marked strongly by chiller reggae-influences than their previous electro offerings. You could sense that most of the crowd weren’t familiar with the new tracks, so the set moved slower than the usual bombastic, frantic Bomba Estéreo shows. This type of ‘album-run-through’ gig would work better in a much smaller venue, allowing fans to discover the new tracks in an intimate setting. At KOKO, the crowd was out of place; divided by loyal Latin followers chanting for their first hit single “Fuego” (they never got it), and newer fans that discovered the band through the electro party tune “Fiesta” – which was the shows closing number in an encore which provided some respite for a restless audience. Other encore tracks featured the hook-laden “Soy Yo” and the singalong tropical-pop number “Somos Dos”, but it just came too late.

Not all of the “Ayo” songs went down badly either, the chilled-coastal vibes of “Taganga” succeeded in transporting punters from rainy London to sunny Colombian beaches, and the upbeat lead single “Ayo” was equally enjoyable. But, overall the set list was flawed, poorly paced, dragging the show on. It would’ve been better if they opened with the champeta interludes to rev the crowd up, rather than saving it till the end. Other classic Bomba Estéreo tracks, like the aforementioned “Fuego” and the blissfully melodic “Alma y Cuerpo” were sorely missed.

Perhaps Ayo just needs time to grow, but the band will have to work a little harder if they want to maintain a live reputation worthy of shows of this size.

Here’s the band performing “Duele” at the show (taken from their Facebook live feed):