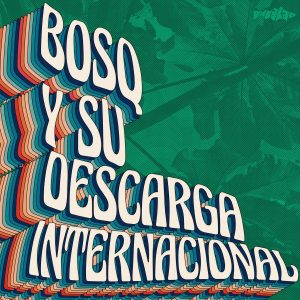 In fact, Bosq is a producer, multi-instrumentalist and DJ, who relocated from Boston to Medellín, Colombia around three years ago. Someone, in other words, a little like Will ‘Quantic’ Holland and Richard Blair of Sidestepper, an outsider entranced by the music of Colombia. There are shades of early Sidestepper in the single, “Rumbero”, which kicks off this dance-floor bonanza: the horns and funky guitar, for example, set way back in the mix underneath a deep electronic groove and Nidia Gongora’s terrific vocals. You get a strong sense of the remixer at work. But if you anticipate more of the same, the following “Mi Arizal” transports you to a Colombian disco, with prominent Earth Wind & very Fiery horns, a funky disco beat and more fine vocals from another of his collaborators, Dorkas. It’s music to make you get up off that thang.

This is Bosq’s fifth full-length album, following on from 2018’s Love & Resistance. The dozen numbers have been in the pipeline for some time, but a combination of factors – including grounding issues in his new studio that kept resulting in equipment shocks! – conspired to delay the album’s release. I can tell you now, it was well worth the wait. Already, the first two singles, “Rumbero” and “Wake Up” (featuring a previous collaborator and Fela alumnus, Kaleta, on vocals, and a similar vibe to Hugh Masekela’s wonderful but all too brief partnership with the Ghanaian band, Hedzoleh Soundz), topped both the vinyl and digital sales charts and kicked up a lot of DJ fuss.

What makes the full release so special is its sheer relentlessness. Not since La Mambanegra set a fire under Latin dance floors has Colombian music sounded quite this funky. If dancing’s your thing, this doesn’t let up from first track to last. While it’s hypnotic, it’s never monotonous; each track is different in its own way. Basic house, funk and disco rhythms are dressed up in all kinds of Afro-Latin tropes and influences. “Cumbia del Valle”, for example, does just what it says on the tin with blazing horns, cheesy organ and hi-octane wah-wah guitar. The instrumental “El Carriqí” is redolent of the indigenous music of Colombia’s Pacific coast, almost like a funked-up Rio Mira. “Descarga Mundial” is salsa time, with some wicked horns and compelling vocals by Mauro Aboganster. There’s the aforementioned afrobeat influences on “Wake Up”, while “Suumo” (featuring K.O.G.) takes you to the Antilles.

From Boston to Medellín: but this is no mere tourist’s appropriation of colourful native sounds; it’s a rich, genuine exchange of musical ideas and influences that adds something worthwhile to the tradition of Afro-Latin music. A key note of all these genres that Bosq plays with is joy. This is a terrific, seriously funky album that makes you smile from first note to last. Dance until you drop!

Bosq Y Su Descarga Internacional is out now on Bacalao