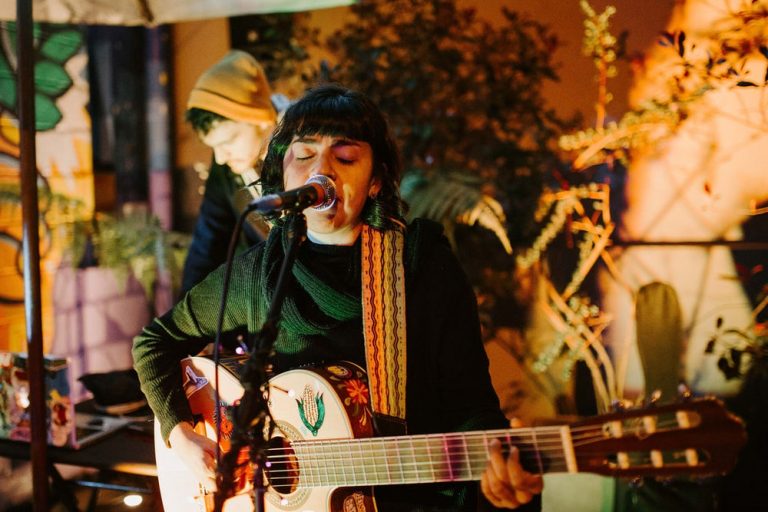 Doesn’t time fly, it feels only yesterday we were launching our new monthly Colombian feature, and yet here we are again with the second installment of the Colombian Music Vault. A sweeping array of the latest Colombian pearls brought fresh to you from all points between Andean, Pacific and Caribbean – check out some of the most exciting, fresh-off-the-press Colombian releases below.

Ancestral-electronic gurus Mitú need little introduction. Returning with their latest EP Santa Elena, the duo offer a mostly upbeat fusion of new sonoric explorations. The guitar-led EP is a soundtrack for the imagination. Check out filmscape-ready ‘Algodón’, from Santa Elena, below.

Following a 10-plus year hiatus, De Juepuchas’ producer Diego Maldonado has revived a number of original tracks, originally recorded circa 2009. The originals, now available for delectation via MySpace had originally been recorded via iPod headphones and beaten old computer.  Now in 2020 with some improved technical prowess and presumably some time to oneself during quarantine, De Juepuchas has been given a fresh breath of life. The 10 year celebration features link-ups with long time collaborators and has all been mixed by Cero 39.  Check out “La internacionalización de Helado” for an entertaining taster of the festivities.

Los Bulldozer, is the project of guitarist Fabian Morales, through which he showcases a ranging guitar prowess. A bright collection, that draws on diverse Colombian influences, Funky Amor is sprawling EP and an exciting introduction to another Colombian artist brought to us from Galleta’s Calientes. The release is the first of series due to be released from the label’s “Singles Collections”. Let dirty, pacific blues inspired “CurrulaoMali”, take you on a journey of afro-inspired musical textures.

Ines Granja is a legend of the Colombian pacific. Hailing from Timbiquí, Cauca, and lauded as “the voice of the marimba”, her prolificacy in Colombian music circles is probably somewhat under captured outside of the country. Ines nevertheless continues performing. Now, thanks to Bánfora Records, one of Colombia’s newest labels that is working with artists who interpret traditional styles, Ines has released a new album in the form of Remembranzas. Let Juga (a Colombian pacific genre), and title track ‘Remembranzas’ entice you for more .

Armed with guitar and a cutting, lyrical potency, La Muchacha has written her assessment of that which is wrong with Colombia in 2020. “La Sentada”, is a two-and-a-half minute swipe at that which Ramírez Ocampo sees as “wrong and rotten” with modern Colombia. In a two minute retort that cuts at state brutality, paramilitary culture and environmental exploitation. It’s a pretty noteworthy mark of where artists are feeling in the current Colombian climate. “Everything in Colombia is dirty, paralyzed and rotten. The criminal state prosecutes, criminalises, beats and murders its youth,” says the artist in the track’s notes.The first taster from La Muchacha’s forthcoming album and certainly a release that leaves its mark.

When London-based saxophonist and composer Nubya Garcia, came to Colombia last year with a number of other artists supported through the British Council’s MESTIZO project, her long standing interest in Caribbean influenced sounds found a match in the form of Bogotá based La Perla. The result; a wistful jazzy cumbia number, on Garcia’s well-received latest album, Source. Stitched together through tambor and interwoven by Garcia’s neat saxwork, “La Cumbia Me Está Llamando”, is a gem.

Coming together in Bogotá in 2013, Son De La Provincia are a group of Carribean coastal musicians who carry the torch of previous generations from the region. Rich in traditional sounds, combined with a contemporary approach to lyric and composition, they are a true modern day gaitero  proposition. Latest, seven-track LP, #Gaitero’s del Siglo XXI, is a captivating listen. Listen to “Chinchin”; too good of a proposition to turn down.

Another song capturing much of the present feeling in Colombia of late, “La Caída”, is a track in the context of chaos. On the back of indigenous groups recently overthrowing a statue of one of the first Spanish colonists, Sebastián de Belalcazar, outside of Popayán in Colombia’s south recently, and with much of the country pitted against an increasingly authoritarian state, “La Caída” (“The Fallen”), alludes not only to the toppling of the statue but a whole lot more that is going on through Colombian society.

“Instrumental music is capable of transmitting everything, except a political or social feeling. There you have to put a forceful text that speaks openly, and rap is the best weapon in this game,” Sergio Paramo, the tracks Composer told hjck recently,

From somewhere aboard a mothership on the outer stretches of the galaxy, or more precisely, hailing from the country’s Antioquian valleys, Lu Zero, is an electronic composer from Medellín. The intricacies in her experimental sounds and have resulted a Sci-Fi inspired EP, Naturaleza Futurista. Take a dive off the stratosphere with the steadily building title track “Nauturaleza Futurista” as Lu Zero’s martian frequencies induce a steady lull.