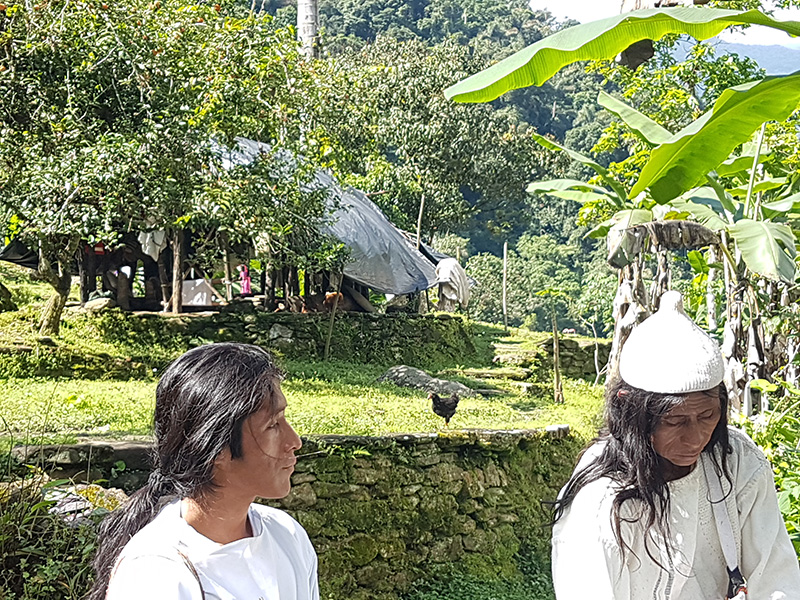 Why Are Colombia’s Kogui Indigenous People So Unique?

Whilst spending several weeks in Santa Marta on the Caribbean coast of Colombia, as part of an exciting research project exploring the socio-political effects of coca cultivation and cocaine production, I was privileged to meet the son of a Kogui Mamo, or community spiritual leader. We walked together for four days in the Sierra Nevada mountains, whilst I glimpsed a small insight into the Kogui people’s fascinating culture.

As well as being the world’s tallest coastal mountain range, the breathtakingly beautiful Sierra Nevada contains almost every ecosystem on the planet: deserts, alpine lakes, rainforests, wetlands, tundra, coral reefs, and glaciers. It was the perfect environment for discovering the rich culture and traditions of the Kogui community through my guide, Pedro (pictured below). 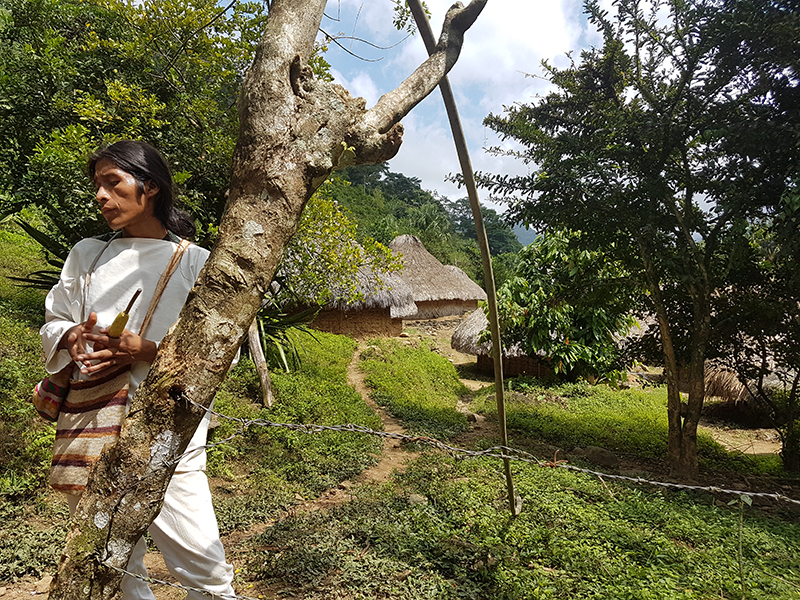 The Kogui, meaning “jaguar” in the Kogui language, are an indigenous ethnic group that live in Northern Colombia. My guide, Pedro*, told me that their civilization has continued since the Pre-Columbian era in the Sierra Nevada. The modern day Kogui live much the same as their Tayrona ancestors.

Originally descended from Tayrona culture, which genetic and archaeological evidence says dates back to at least 200 AD, the Kogui are one of the 4 resulting ethnic groups (as well as the Wiwa, Arhuacos and Kankuamo people).

The Tayrona were an advanced civilisation who built many stone structures and pathways throughout the Sierra Nevada, leaving behind stunning gold, artwork, stone and pottery artefacts. 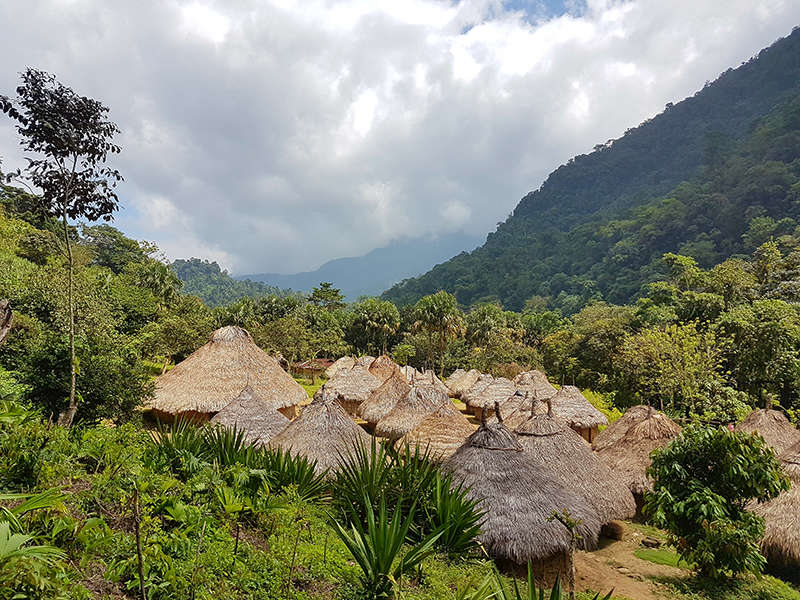 Hidden in the Sierra Nevada Mountains, a Kogui village combines a refreshing outlook with ancient traditions

Why are the Kogui unique?

The Kogui are unique among Latin America’s indigenous cultures because the Spaniards never conquered them. They represent the most complete surviving civilisation of pre-Colombian America. Pedro* told me that they are not nomadic or hunter-gatherers; their fields have been cultivated continuously for over a thousand years.

“Everything about Kogui history and beliefs is passed down through oral tradition within the community”, says Pedro. “We collectively remember the destruction the conquistadors brought to our lands in 1498.”

The Kogui are a peaceful people that have never killed one of their own and rarely intermarry with other ethnic groups. They never grow grey hair and have no facial hair.

Kogui men continuously chew coca leaves mixed with lima, a paste made from heating and crushing seashells collected from the beaches in the nearby Tayrona National Park. This tradition is practised by many indigenous groups to connect them to the natural world. Accordingly, Kogui men can spend over a week without sleep during their ceremonial rites.

When Kogui men turn 15, they are presented with a poporo by their community’s mamo, meaning that they have come of age. The poporo (pictured below, next to some coca leaves) is a small, hollow gourd filled with lima that must be carried on their person at all times. 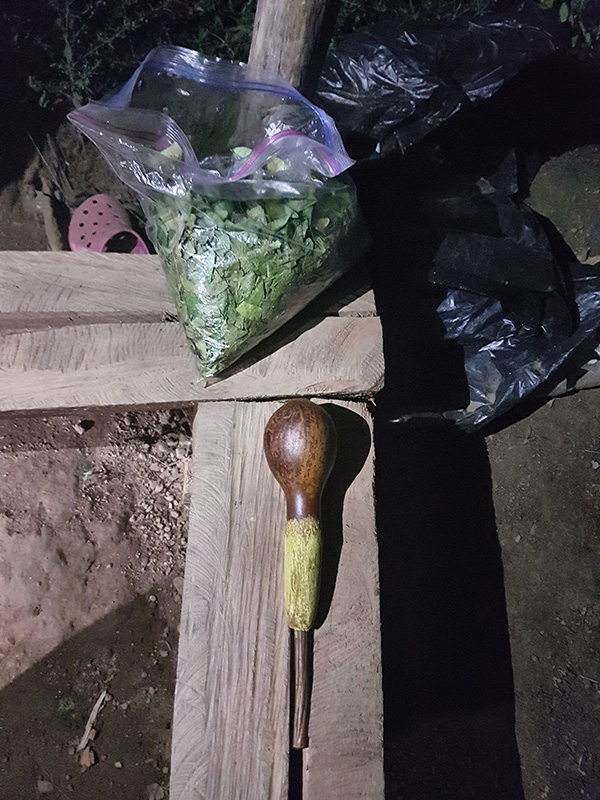 Whilst the coca leaves are chewed, the Kogui men suck on the lima, which they extract with a stick, and rub the mixture on the poporo to develop a hardened crust. The extent of this layer depends on the age and maturity of the Kogui man.

Pedro* told me that he goes into a meditative state as he rubs the lima paste on the outside of his poporo, and that each poporo has a distinctive pattern which a mamo can then study.

What are the Kogui’s beliefs?

They base their lifestyles on the understanding that the Earth is a living being, and see humanity as its “children.” The Kogui believe that they must help prolong and protect life on earth.

They say that our actions of devastation, exploitation, and misappropriation of resources is weakening ‘Aluna’ and leading to our destruction. The Kogui community say they are keeping the world in balance by living in harmony with the environment, and understandably fear interference from the outside world. 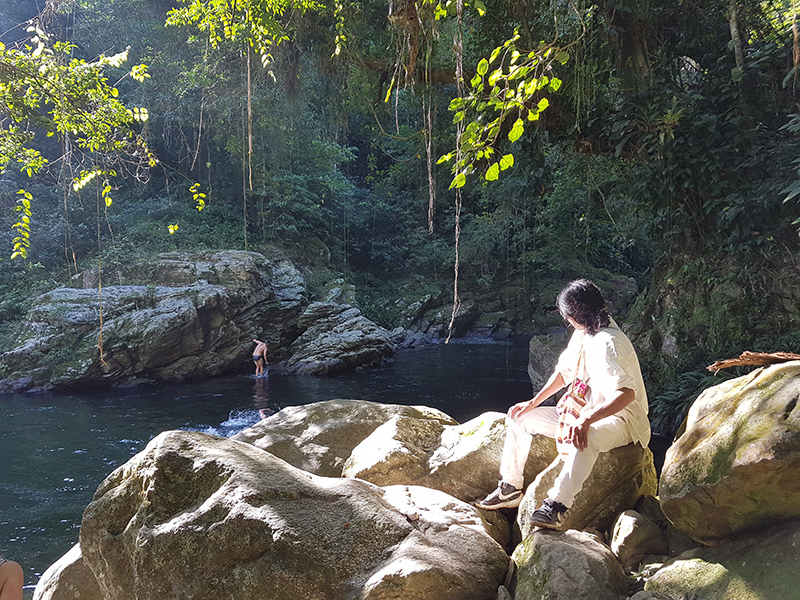 Koguis live in harmony with the environment, they are concerned about what the future might bring.

How have the Kogui maintained their culture?

When the Caribs invaded around 1000 BC, the Tayrona were driven into the highlands of the Sierra Nevada, long before the Spanish conquistadors even arrived.

Fleeing into the mountains proved to be a strategic and beneficial decision. In 1498, the Spanish began to enslave indigenous groups shortly after arriving in Northern Colombia. The Tayrona remained isolated due to threats from both soldiers and dogs. Regardless, numerous mamos were hung, women were raped and abducted, and children were forced to accept Spanish education.

As a result, the Kogui have stayed in their home in the Sierra Nevada, which has allowed them to avoid the worst consequences of colonisation.

However, since colonisation began over 500 years ago, the Kogui, Wiwa, Arhuacos and Kankuamo have lost the majority of their mid-to-lower elevation ancestral lands. Furthermore, in recent decades, the Kogui have been caught in the crossfire between paramilitaries, guerrillas and cocaine traffickers.

Pedro* said, “to maintain our traditional way of life, the Kogui seldom interact with outside civilisation or the modern world. Outsiders are not allowed inside our ancestral lands.” 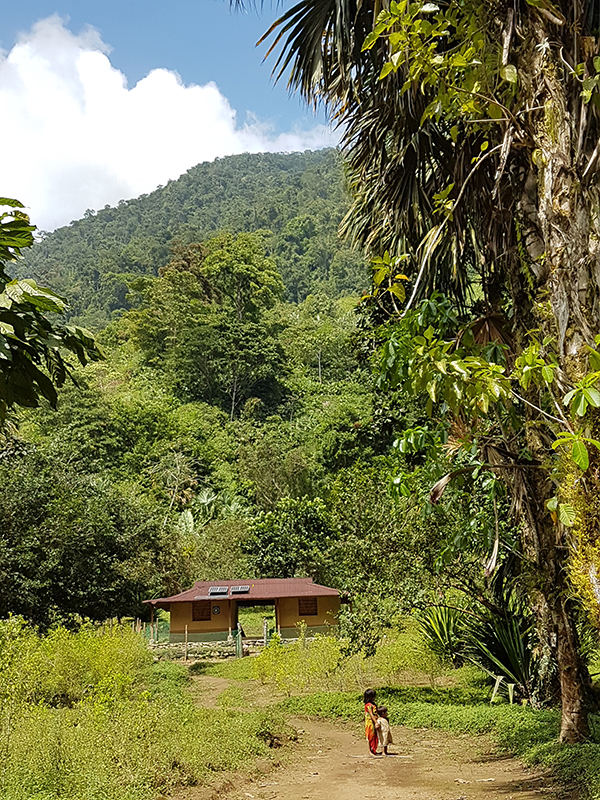 Two Kogui children stand in front of an abandoned medical centre, closed due to lack of government funding

Hope for the future?

The Kogui are highly attuned to nature and fear we are destroying the planet. In recent years Pedro* tells me he has witnessed floods, the drying up of lakes and rivers, landslides, deforestation, and seen many trees die.

“The tops of the mountains used to be white, now they are brown and bare. Lakes are parched, and the trees and vegetation surrounding them wither. We hope more can be done to take care of our homelands”, he told me.

I was also lucky enough to meet Juan*, a Mamo, during my time in the Sierra Nevada. I asked him what was the most important thing for me to learn from my short time here and he replied:

“That you can only expect to get a tiny insight into our centuries-old customs and traditions. Know that these are our lands, you can visit some of them, but they belong to us.”

I was left feeling that we have a lot we can learn from the Kogui. Everyone I met had a deep-rooted stillness, pride, humility and peace about them. Living in harmony with their environment and having such a close connection with nature, their culture and traditions clearly has its benefits.

Juan* said: “it is imperative to understand that the earth is a living body and if a part of it is damaged, in turn the whole body is damaged.

We see the destruction caused by mining, logging, constructing ports and power stations, and roads. Global capitalism is resulting in the annihilation of natural resources which affects the whole ecological structure.”

All photos by the author.

*the names of the Kogui have been changed for anonymity purposes