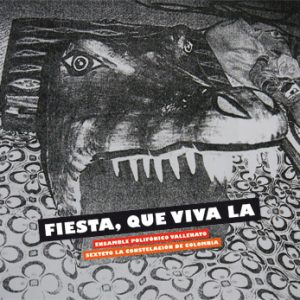 It bends but it does not break. You can take cumbia and you can twist it, curve it, flex it but you won’t change its nature. That seems to be the concept behind the first and only recording of the ensemble Sexteto La Constelación De Colombia and their Bogotà compañeros Ensamble Polifónico Vallenato.

Their album Fiesta, Que Viva La is indeed the more experimental approach you can have with the traditional Latin American style, reflecting a willingness to overcome confinements and boundaries and put the genre’s limits to the test. Ten tracks to discover new ways of reflecting Colombian folklore. Ten tracks to understand how improvisation and free-wheeling inspiration can enrich a well established way of playing music. It goes without saying that Fiesta, Que Viva La is far from easy listening. It requires commitment, dedication and, first of all, much listening to understand it and digest it.

The project started back in 1998, when some students at Bogota’s Javeriana University joined forces and started to play together in a band called Ensamble Polifónico Vallenato. Their name was also their mission, because they were determined to revive the traditional Colombian vallenato style, mixing it with rock, punk and free-jazz. As they affirmed in an interview, they wanted to “play whatever and see what happens”.

After less than a year, the Ensamble reincarnated itself as Sexteto La Constelación De Colombia. The music played by the new band was still experimental but more defined and bonded to wider aspects of Colombia’s traditions. They had started to research deeper into folkloric instruments and included in their new musical luggage gaitas and caña de millo, both types of indigenous flute.

As soon as University finished, many of the members moved overseas and after just six months Sexteto disbanded. Later the group’s members gave life or joined notable projects like Meridian Brothers, Frente Cumbiero, Ondatrópica, Cielomama and Los Pirañas. However, they never added “the end” to relationship with the groups. That’s how, 14 years later, they decided to travel through those experiences again and finally get into print their first work together. Fiesta, Que Viva La is a recap of their young musical efforts.

The album, almost equally split between the two bands, expresses what their music was and still is about. If the Ensamble Polifónico Vallenato sounds more free-range, intricate and at times puzzling, rotating around the inventive accordion played by Javier Morales, Sexteto La Constelación De Colombia, even if still wandering through complicated music paths, acquires a more refined technique and shows an enviable synergy between the musicians.

The record is arguably the less uniform and homogeneous album you will listen this year: not only does the track list reflect two distinct bands but also every single song is the amalgam of a plurality of musical worlds, influences and scenarios. If the Colombian roots of the two projects are well defined, for example on “Cumbia” and “Muerte Lenta”, what accompanies them is often even intangible. Free jazz mixed with West African rhythms lost in an ambient scenario and lashed by experimental, at times, noise waves.

But the most peculiar aspect is that, they achieved all this, mostly playing traditional instruments. To define Fiesta, Que Viva La as a brilliant record or as an abstruse one, it’s all about how much your ears are open and willing to embrace different sonic solutions. The only sure thing is that this is no average work.

Fiesta, Que Viva La is released by Staubgold and available from Amazon UK, Amazon US and iTunes