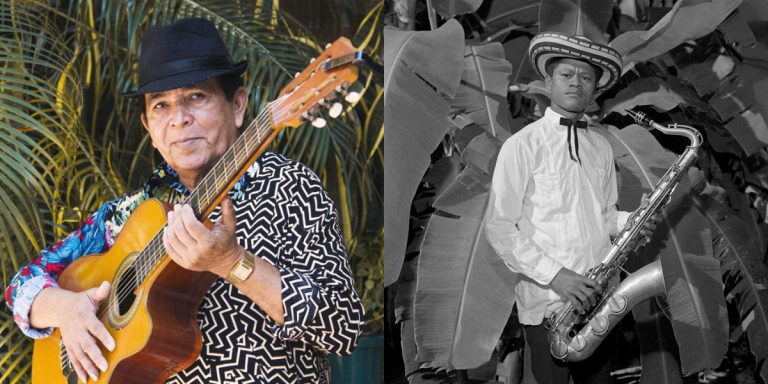 It’s with huge sadness that we’ve discovered not one, but two, legends of Colombian music have passed away, barely a week apart. Abelardo Carbonó, known as “el padrino de la champeta” (the godfather of champeta) passed away at the age of 73 on November 22nd; he was followed by Michi Sarmiento, who died at the age of 83 on November 26th. Both musicians were hugely important figures in Colombia’s tropical music and were still actively recording and performing.

Abelardo Carbonó was born in 1948 in Ciénaga, a village located between Santa Marta and Cartagena on Colombia’s Caribbean coast. He moved with his family to Barranquilla in 1959 where he would work in the police force for almost twenty years before starting a music career in the 80s. As well as forming his own band, Abelardo Carbonó Y Su Conjunto, he would sing and play guitar for groups such as Caribe Star, Q.A.P. Band and Estrellas de Ham, becoming known for the champeta criolla style that mixed strong influences from Africa and the French Caribbean with popular coastal Colombian rhythms. His major works were released on a compilation, El Maravilloso Mundo de Abelardo Carbono, released by Palenque Records, and he has also featured on compilations by Analog Africa. In the past few months, he had released singles in collaboration with Quantic and Meridian Brothers.

Saxophonist and clarinettist Michi Sarmiento was born in 1938 in Labarcé, María la Baja. His father, Climaco Sarmiento, was an important composer, arranging for Pedro Laza amongst others, and Michi followed in his musical footsteps. He released a number of much-loved albums as Michi y su Combo Bravo, beginning in the 1960s, and he would also arrange for Joe Arroyo’s La Verdad and work with Los Corraleros de Majagual. Some of his seminal songs were released on Aqui Los Bravos! The Best Of Michi Sarmiento y su Combo Bravo 1966​-​67, a compilation released by Soundway Records in 2011. In recent years he had worked with Ondatropica and had been performing regularly until eye surgery last year.