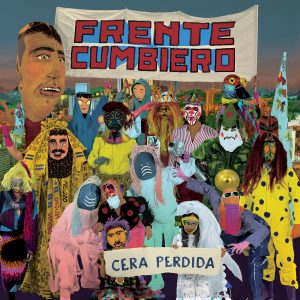 Frente Cumbiero have certainly made a name for themselves as one of Colombia’s most evolutionary and radical groups from the past musical decade. Far from being solely ‘a band’, the group pride themselves on fusing typical Colombian musics, such as cumbia and porro, with dub and even electronica. Their latest album Cera Perdida is more than just a lockdown release, it celebrates a new lineup, under the tutelage of Mario Galeano, that celebrates both tradition and modernity.

It’s been ten years since the group released an album as an ensemble, but Galeano has certainly been busy in the interim, as a founding member of Ondatrópica and Los Pirañas, and as Frente Cumbiero, who this year released Minyo Cumbiero, a collaborative EP with the Japanese group Minyo Crusaders – well worth a listen, it’ll blow your mind.

“It was time for us to show our work with the new quartet, a project that we’ve been working on for the past two and a half years.” Galeano comments, marking a shift from their prior, more electronic, sound. Now, Colombia’s Caribbean takes centre stage, with typical gaita flutes mixed alongside clarinet, euphonium and saxophone. During the eight songs on the album , lines are blurred between jazz, porro, electronica and cumbia. It really shouldn’t work, but it does.

Kicking off with “La Era del GigaHertz”, a funky and frenetic track that blends hypnotic synth with wind instruments. “Cumbia del Asilo” has a hint of jazz but with the cumbia beat driving the song along, while “Llegamos los Montaneros” makes me think of the kind of soundtrack that you’d want to accompany you on a long bus ride across South America, finding joy in its repetitive nature. Indeed, for Galeano, the group’s vision has transcended from being a purely Colombia-focused work – Peru, Mexico and Argentina have all influenced this musical map.

“We were interested in showing our own take on tropicalismo, without looking to purely emulate music from the (Caribbean) coast, but we wanted to also explore sounds from up in the Altiplano.” Galeano adds. A new era and indeed concept for the group’s famed “Tropicanibalismo”, through which they have made a name for themselves previously, by recovering the values of traditional music.

Cera Perdida is as unique and timeless as the group itself. Adding a sprinkle of tropical joy and some virtual vitamin D to your musical collection during those long winter evenings.

Cera Perdida is out now and available on Bandcamp