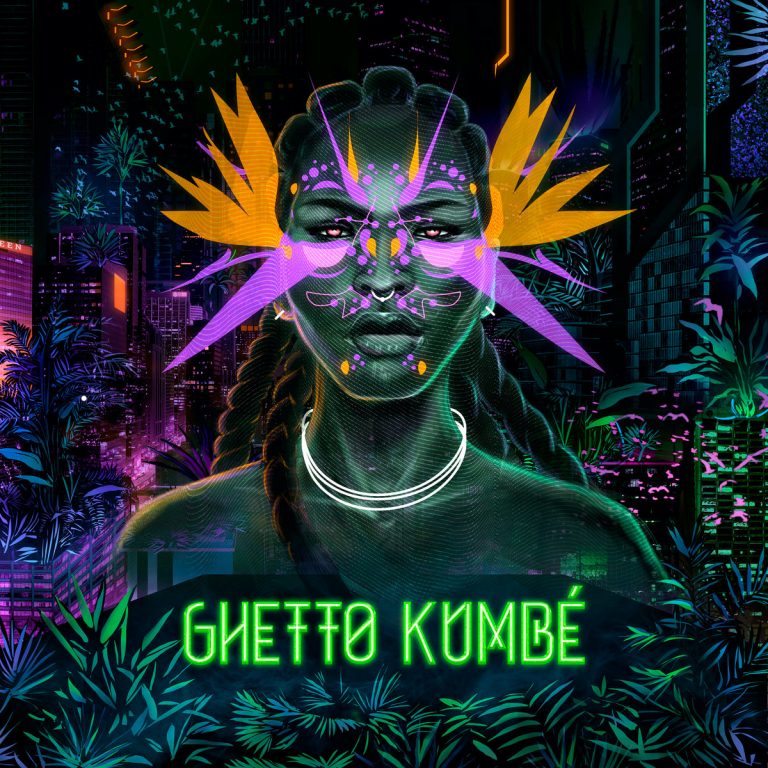 Ghetto Kumbé’s self-titled debut album is hypnotic, frantic and quite possibly unlike anything you’ve heard before. Caribbean house beats and electronic rhythms alongside a cacophony of traditional Colombian instruments, the gaita flute and most importantly the drum, tambor. Co-produced with a sprinkling of UK bass by The Busy Twist, this is a homage to the group’s roots with a new lease of life. At a time when Colombia remains under strict lockdown, and with the country’s politics crumbling, this tension spills over into the tracks on the album.

Founded by Edgardo Garcés, Chongo (Juan Carlos Puello) and Doctor Keyta (Andrés Mercado), all three members of the group hail from Colombia’s Caribbean coast: Garcés from La Guajira, Puello from Cartagena, and Mercado from Santa Marta. It’s a region famed for its traditional music and fellow folklorists such as Totó La Momposina and Petrona Martínez. “There is a lot of dissatisfaction and anger in the lyrics,” Garcés comments, “but also lots of joy because we’ve always tried to carry the message through music and dance. We’re from Colombia’s Caribbean coast, and we were born and raised in violence.”

The album’s instrumental tracks “Intro” and “Interludio,” break up some of the more politically-charged elements, while providing a space for the drums and gaita to take centre stage. In the album’s lead single, “Vamo a Dale Duro,” Ghetto Kumbé attacks the Colombian government’s attempts to tackle poverty, racism and violence. While on track “Está Pillao,” political lies and corruption form the basis for heavy-hitting lyrics. “Tambó,” the most recent single from the album, draws you in with its repetitive lyrics; “Tambó, Tambó, Tambó, que a lo lejos suena / Tambó, Tambó, Tambó, sacame esta pena,” linking ancient and modern through the power of the drum. A must-listen is the amazing “Lengua Ri Suto,” recorded in Palenque, the first freehold from the the late 1600s, established by escaped enslaved people across the colonial Americas. This track also features folkloric hip-hop collective Kombilesa Mi performing in the Palenquero language. It’s a new beginning for the group, that is both revolutionary and visceral.

Ghetto Kumbé are an explosion of sound, electronic innovation and drums, a new sound for new times.