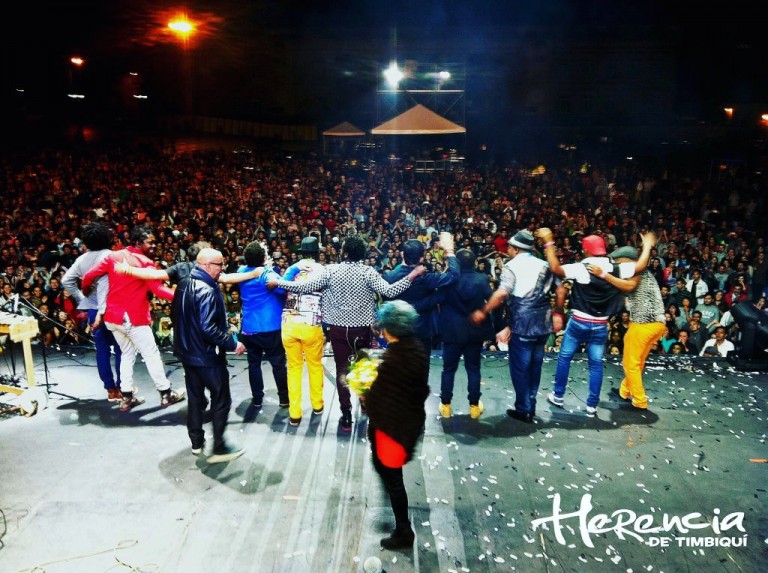 Music born in the heart of the Pacific, fused with urban beats from the hot, gritty, salsa-loving city of Cali, Herencia de Timbiqui´s 11-strong band infected the city with the sounds of traditional bombo drums, congos, guasa shaker and marimba de chonta (a type of wooden xylophone). Add to that electric and bass guitar, keyboards, trumpet and sax and you get Herencia de Timbiqui’s unconventional and unique sound. A sound that stands apart from much of Colombian music today and which won them the prestigious Viña del Mar in 2013 and many Petronio Álvarez prizes, as well as a worldwide following.

Kicking off Saturday night in Carpa Cabaret Armando, a trendy venue in the hipster Bogotá neighbourhood of Chapinero, Herencia de Timbiquí proved yet again the universality of their music, as millennials danced expensive-cocktail-in-hand to their distinctive blend of folklore and something uncompromisingly more modern. Herencia de Timbiquí’s process, despite its intuitive nature, reaches orchestral heights.

Sticking close to their roots and the traditional sounds of música pacifica [music from the Pacific coast of Colombia], they have an ability to transplant the audience from the cosmopolitan corners of Colombia’s capital to the coast, a coast hemmed in by tropical jungle and lapped by the Pacific Ocean. Historically, a region abandoned by the Colombian government and witness to astounding levels of violence, the tragedy and resilience of its people bleed through the music. “We sing about what happened in this land, the injustices that took place, for the people who suffered and the children who cried” said Cristhian Salgado, one of Herencia’s members to me. “As artists we are connected to our heritage [‘herencia’] and it is our responsibility to be coherent with that”.

It is no surprise that their new video, “Vive A Tu Manera” (see below), which they were in Bogotá to promote, celebrates precisely that dignity and creativity in the face of adversity that both the population of the Pacific and the band display. Inspired by local stories and exceptional, but everyday, characters, the video captures the diversity of people in Cali. It is also completely fitting with the lyrics and diverse sounds of the group.

The video was projected, along with other video clips, to thousands of people in the historical Plaza Bolívar on Sunday night. To celebrate the end of the XV Festival Iboamericano of Theatre, Herencia de Timbiquí headlined an impressive show, supported by Monsier Perinné, for a local crowd of fans and an international audience of theatre-goers.

The mood was contagious. Like the night before there was a complicity and companionship between the musicians that infected the crowd completely. Mirroring the dynamics onstage, the crowd enthusiastically danced together and sang together, even after the musicians left the stage.

After the success of their previous album, This Is Gozar, Herencia de Timbiqui are now working on a new release, which will have a European, as well as Colombian version. Concerts in Colombia and Pánama, as well as a summer tour in the USA, will keep introducing Herencia de Timbiquí to new audiences, audiences which are guaranteed to be entranced and seduced like the rest of us.