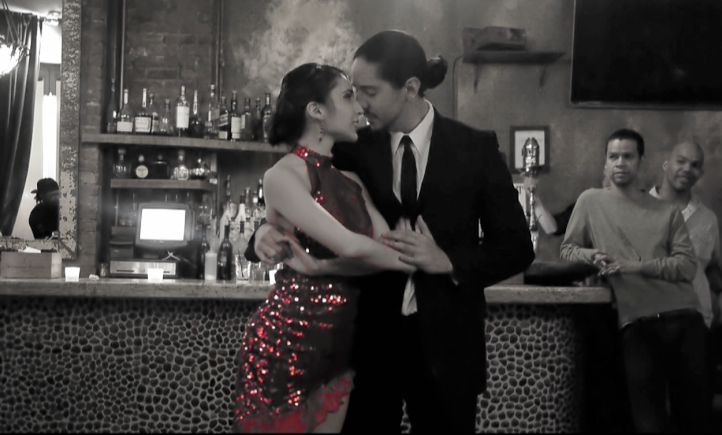 Adrian Manzano is a lover. It’s an impression I got the second I met him at a “Que Bajo?” party a few years ago. Now, I don’t mean that the native New Yorker was hitting on me, but that this is a man who loves women in all their glory.

Nowhere is that more evident than in Manzano’s debut full-length film, “Sex, Love & Salsa.” The story is about a young womanizer in New York City who loves women so much, he can’t just pick one. Shot in ‘mockumentary’ style, it involves the main character, Julian, recording his dating life. He falls in love with a sassy salsa dancer named Maria (played by Gabrielle Ruiz) and attempts to woo her by rehearsing and performing with her at a dance competition. But in the mix are two other women Manzano spends time with– Ingrid (Susan Quinn), who is not only his lover but his best friend, and Genny (Sofia Rodriguez), a young Dominican girl who is quick to fall for him.

But that’s not all. The film was executive produced by his then-girlfriend, Gabriela Jerez. I had the pleasure of viewing the independent film at midtown Manhattan’s Time Warner Center as part of a Hispanic Heritage Month in September. The theatre was mostly filled with—who else?—women, many discussing salsa congresses and parties before the film started. After 90 minutes, my verdict was that it was a coming of (later in) age (the main character is 29) movie, and that I should purchase the film and share it with friends and family because we’ve all known a version of Julian (played by Manzano, despite having first cast another actor, who later backed out).

I recently chatted with Manzano, who is of Colombian descent, and the executive producer of the film, Gabriel Jerez, a Dominican American, about the film, which got two audience awards, and a jury award, for best film at the Harlem International Film Festival and Festival du cinema Latin Americain de Montreal. The film also showed at the Colombian Film Festival, the San Franscisco Latino Film Festival, and the New Filmmakers Festival. He even took it to Cannes to try and get distribution.

Sounds and Colours: This film is obviously somewhat based on your own life and relationships, right? Adrian Manzano: “Being my first film, I thought i should write about something I knew, which was womanizing, and its perils. A lot of the film is quite true, especially the female characters who are amalgamations of different women i dated in New York City. And the lead Julian, I have qualms identifying with him, because I know he comes from me, but he’s not me. Because I decided to play the main role, I knew it was a huge risk, but it paid off.

“I get comments all the time from the audience about how they related to certain moments or characters … and this type of personal film making isn’t really seen much, especially for Latinos who only get fed “Machete” and “Dusk Till Dawn” -types of movies. Personal artistic film-making is harder to market, more difficult to get an audience to come out to, but when they do, they love it. Latinos, and POC love it, but most of the media is controlled by Old White Men, who don’t like it as much. And because we don’t see these films for latinos often, wannabe critics, get to flex their muscles feed their egos by taking cheap shots. Then they complain about Machete 3.”

S&C: Gabriela, you were dating Adrian at the time. How did you come to produce the film, and was it difficult being that you were involved in a romantic relationship with him?

“I love how we thought it would only take a few months. Ha! Little did we know what we had signed up for. It took the next few years! What made me as his then-girlfriend want to produce this film was that I wanted to see his dream fulfilled, as well as mine. If there is anything that I want the audience to take away from the film its that all their dreams are possible. The how, who, what, where, and when, will all come into place when you are clear about the why. There’s a whole love story in the behind the scenes of the film. The film exists because two people chose to love and support each other, even if it was ‘just for now.’ And I’m so proud of what we created.”

S&C: Obviously I recognized a scene filmed at Que Bajo?, featuring the DJ stylings of Uproot Andy and Geko Jones, and music by Los Rakas, Williamsburg Salsa Orchestra, and La Cumbiamba eNeYé. Tell me about your choices for music in this film.

AM:  “I think I’m actually a frustrated musician who never learned to play an instrument. I see my films as music from the very beginning. And salsa was an easy choice because it’s a genre I grew up listening to. I love dancing and going out in New York City to the different salsa clubs and meeting different people. And salsa is also very dramatic, cool, and bombastic. So for dramatic story telling is works great. So it was fun to play DJ and choose some indie artists who I admired to drive the story. Most of them were indie artists, who like indie filmmakers, need exposure in the saturated music scene, so I was happy to expose them to new audiences at every festival. That mix of music and images is a big part of my style.”

S&C: How did you get your start in filmmaking, and did your parents support your career? I know Colombian parents can be tough with that kind of thing!

AM: I started quite young. My father was an electrician, but he loved spending money on cameras. In the early 1980s, he bought a video camera, which was a monstrous TV-like camera with the VCR strapped to his back like a backpack. He would take this to cookouts, the beach, and vacations. I started making films with my brother and cousins at around age 10. By age 14, I saved up my summer job money and bought my first camera. And i was menace with it, I really enjoyed hidden camera and catching my family in embarrassing moments and playing it back for them. “Stop it, he’s recording!” was a common phrase heard around my house.

“In college, I continued. I was a literature major, so I would adapt the literature from class into a short film. One of my first was Nikolai Gogol’s, ‘The Overcoat,’ from 1800’s. I turned it into a modern college setting. It was a hit. And I was also acting in theater, which I considered more of a hobby. Acting came easy to me until I was nominated my senior year for a regional competition, which I lost… But I shifted and focus after college and pursued the theater world for a year. I quickly realized acting wasn’t for me, and I spent a few years working a few different fields, teaching English in Spain, mortgage brokering, real estate sales, and a startup business.

“But after the financial crash of 2009, I began to rethink how I wanted to spend my life. “My parents, being immigrants, didn’t really understand what it meant to be an artist. They were supportive to a point, but encouraged me to explore other options. “Sex, Love and Salsa” took three years to release, four now with the festival run, but it has yet to turn a profit, which is ok, for a film that cost $7,000 to make. But opportunity costs are heavy. So  they weren’t the most understanding, but they were still supportive as much as they could be. They enjoyed the film, even the embarrassing parts. My mom would like less sex in my next film.”

S&C: What is next for you? Any plans to make films in Latin America?

AM: “The plan is to make these type of character driven films for Latinos and people of color each year. I see how filmmakers like Woody Allen and Tyler Perry are able to do it, and there is a business model that can support it. The trick is to keep budgets very, very, low and be as frugal as possible when making the film. Having done it once, I learned a lot about the business, and how to make a no budget film. I see opportunities with growing Latino demographic, which is hungry for character driven stories. And luckily they support by liking, sharing , commenting, some have now become investors in the new film. Over all I’m extremely humbled by the community support I’m getting. “My next film, “La Gradua,” is definitely for the community. It’s a Latina driven story about graduate who moves back to the Bronx to live with her crazy family. It’s a bit absurd, funny, and tragic. She dreams of being an actress but has a lot of hubris and hesitation when dealing with her family and not wanting to be Dominican. Its very much character portrait that a lot of people will relate to. Sex, Love and Salsa‘s biggest fan’s were educated Latina women, so I hope they will enjoy this. They are my main audience, as well as the women I usually date. [laughs]

“As for Latin America, I have a script for Dominican Republic about male prostitution, from a very dramatic/classicist perspective. And for Colombia, I have a gringo friend who will backpack Colombia next year. My plan is follow him with a camera and create a road trip film through Colombia seen thru his gringo eyes. I was also hired and paid an advance to write a script for a Panamanian production company. So I’m quite busy, but “La Gradua” is my baby. We are 60 percent shot, but still have a ton of work to do in post-production. Our goal is the Tribeca Film Festival deadline in December. It’s tight, but I know we can make it. We could use help so we are fundraising online.”

“Sex, Love & Salsa” is playing on Thursday, Oct. 23, at 9 p.m., at the Nuyorican Poets Cafe in New York City. Details here. You can also purchase the film online.