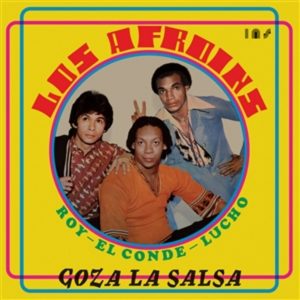 If you’ve spent time in Colombia, then salsa is one of those musical genres as divisive as where you will eat the best bandeja paisa (think a Latin American take on a gut-busting fry up). Like it or love it, if you are looking for some new tracks for your 2020 playlist then this picante collection from Los Afroins should make it alongside Fruko y Sus Tesos and Joe Arroyo.

I for one generally associate salsa with my Colombian father-in-law and December in Bogotá, when Hernan gets carte blanche to crack out his stereo system and blast vallenatos and salsa dura classics during the entire month. However, this album was something of a distant memory even for him – but one that was definitely worth reviving, unlike flares.

Goza la Salsa is a record that seems to have slipped through the net when it comes to salsa dura classics. Born out of Medellín in the 1970s, and patched together under the obscure INS music label (Industria Nacional Del Sonido Ltda), Los Afroins con Roy, Lucho y El Conde were a group of incredibly tight and talented musicians focused on covering a range of guaguancó, mozambique, pachanga, descarga and bolero on a 10-track album. It’s also worth mentioning that this was only the second album released by the group, in what turned out to be a short-lived career before each respective Afroin got snapped up by larger, and more well-known salsa troupes. That said, this 1975 album offers a plethora of much-loved covers, including “Salsa al Pindin” and “Matusa”, which are sure to get even reluctant salsa fans up and off of their feet.

Termed ‘Los Afro’ – due to the group’s impressive hairstyles, and paired up with a nod to ‘INS’ in a clever marketing ploy, the musical talent of Los Afroins is powerful, uplifting and injects a little Caribbean sunshine into your day. I am a fan of original track “Puerto Rico Power” and a sucker for the first track on the album, “La Masacre”, which is spicy, springy and incredibly tight from start to finish.

So what happened to Los Afroins you may ask? Pianist Agustín “El Conde” Martínez, later went on to work with the legend that is Joe Arroyo, while vocalists Lucho Puerto Rico and Roy “Tayrona” Betancourt rose to dizzying salsa heights during the 1980s, the former with his own Lucho Puerto Rico Y Su Conjunto Sonero and Conjunto Son Del Barrio and the latter with Willie Salcedo, Reales Brass De Colombia, and Los Caribes. Brief though their career trajectory may have been, this hidden gem should make it into your salsa collection, especially if you are after a short but show-stopping album that will inject some life and soul into your day to day.