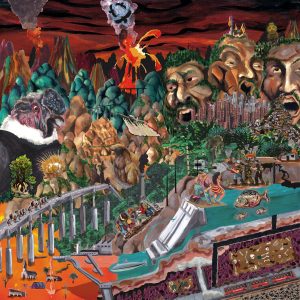 There is an unquantifiable energy when Mario Galeano, Pedro Ojeda and Eblis Álvarez get in a room together. The three Colombians have been making music together since the late 90s, with themes of both exploring Colombia’s rich musical heritage and highlighting the absurdities of Colombian life, running through all their work. As Los Pirañas is when you find them at their most visceral, making music that is charged, ready to erupt into magnificent new shapes and sonic avenues at any moment. On their third album, Historia Natural, we hear them sounding as direct and restless with creativity as ever on a gloriously-varied set of songs.

The album begins relatively laconically for them, “Llanero Soledeño” throbbing with Galeano’s insistent bass and Ojeda’s flailing timbale hits. Soon Álvarez arrives with his questing guitar and the song restlessly segues into new forms as each section brings new sounds and energy, with an organ section (which is presumably Álvarez’s guitar through numerous processes) offering a moment of spry madness before the track caterwauls to a languid finish.

As with much of the album, there are tell-tale references to Colombian rhythms, but it’s hard to pinpoint exactly which. Most recognisable are “Todos Tenemos Hogar”, a Peruvian cumbia given their distinctive treatment, and final track “Rechazados Por El Mundo (Pompeya)” which resembles champeta in its verse, though the addition of cheering crowd noises and distorted guitar do their best to disguise it, adding a certain element of surrealism in the process. “Quedar Bien con el Eyente” is one of the most unexpected delights, a slow-as-treacle groove that could be what Black Sabbath would have sounded like if they had played cumbia.

As with their live show, this album was largely improvised and – astonishingly, given the complex arrangements – recorded live with no overdubs. It’s testament to the chemistry of the members, but also the humility of the group, with Galeano and Ojeda carefully allowing Álvarez room to experiment and seek new melodic and rhythmic possibilities. Yet, on this album, it’s also true that Galeano threatens to steal the show, his charging punk riff on “Infame Golpazo” and more melodic line on “El Venado Triste” some of my personal favourite moments on the album.

On this latest album, the trio are as raucous as ever, delivering a punch of creativity and savage music-making with grandiose riffs beset by the absurdity of modern life. It’s visceral music, but it’s not just that. Through playing on their heritage and quotidian lives, this is skronky tropical music with a heart and over-active head, consistently finding new ways of expression that are never anything other than revelatory.

Historia Natural is released by Glitterbeat Records and available on CD/LP and digitally.