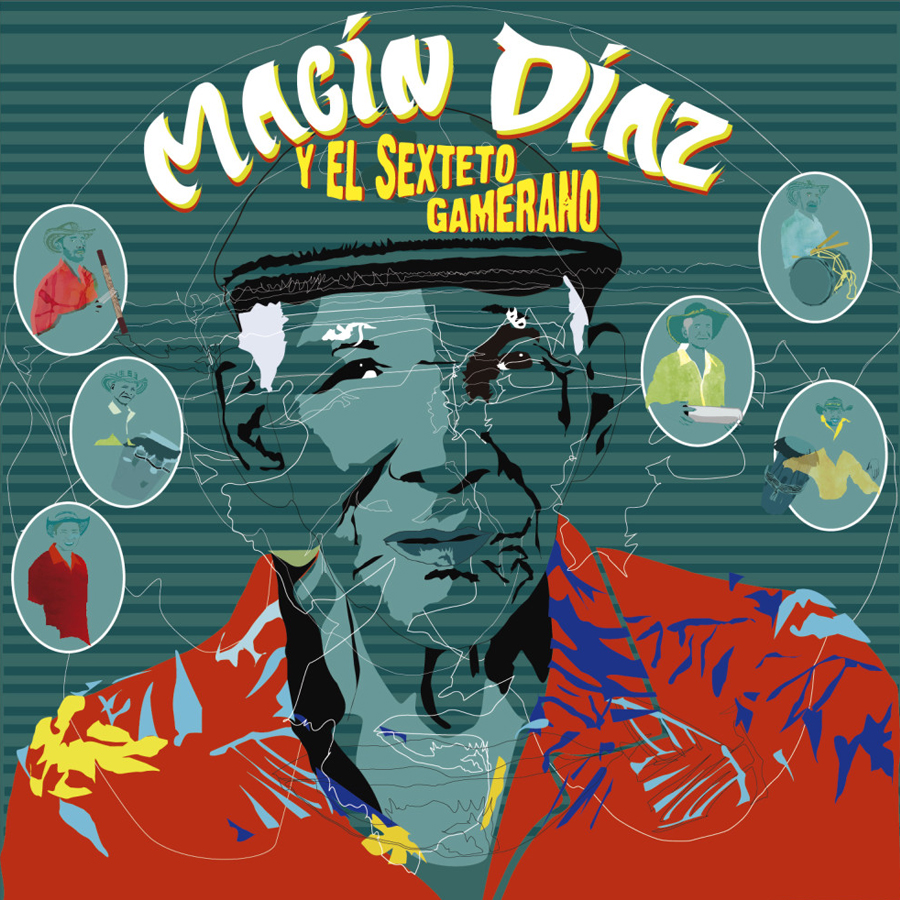 During a time when global bass is at the forefront of musical exploration and sonic innovation through its mixing of electronics with regional genres, there are some projects that shine by placing their value in the unknown life and works of the anonymous heroes of contemporary traditional music. It is unbelievable how these humble people who have been making music for decades in their home towns, have never been properly recorded on studio albums.

Besides releasing material by tropical heavy bass-hitters like Dany F and Cero39, Konn Recordings (an independent label established in Chile and now based in Colombia) has been unveiling some seriously raw Colombian folk music. In 2014 they released a bullerengue gem by Caribbean group Palmeras De Urabá, and now they bring the ancestral voice of Magín Diaz, from the depths of Colombia to the world.

Label boss, Mauricio Sandoval, who also goes by aliases DJ Subversivo and Mr. Toé, personally recorded and conducted the project, also contacting worldwide producer friends for additional bonus discs with remixes to go with the originals. So you can listen to the real traditional music and then the reinterpretations using electronic rhythms like house, dembow and future bass.

Born in 1922, Magín Díaz started making music at a young age, composing his first major hit “Rosa”, which was recorded by the popular singer Irene Martínez. Later he gave more songs away before going on an adventure to Venezuela, where he took part in the famous orchestra Billo’s Caracas Boys and performed alongside Cheo García. With back and forth movements between both countries, the longing for his roots led him to stablish in his birth town Gamero, where he remained almost anonymous.

Hearing the rough take of the classic “Rosa” in the interpretation of his original composer, gives you the chills of listening to something extremely pure, but with the ageing of a good aguardiente, intoxicating and emotional. This heart-pounding feeling is also implied in tracks like “Ya No Quiero Que Me Llores Más” (I Don’t Want You To Keep Cry For Me), and “Yo Me Voy Contigo” (I Would Go With You). You don’t have to understand any word to relate, because the voice of Magín is one of those that express exactly what they are talking about. The juxtaposition of nostalgic lyrics with upbeat music gives you a really deep connection with the meaning of the songs.

For this special occasion, the additional production on the remix side is in the hands of established producers like ZZK’s own King Coya on “Yen, Yen”, compatriot Pernett on “Ña Maria” and Peruvian duo Dengue, Dengue Dengue on “La Rama De Tamarindo”. Also on the roster are included Dany F, Bleepolar, Professor Angel Dust, Tropikore, Caballo and of course, Mr. Toé, among others. A select supporting team giving the proper honours to the voice of a real legend of the Colombian music.