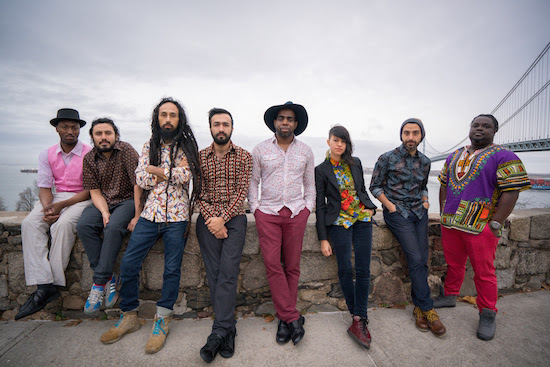 MAKU Soundsystem, an eight-piece immigrant band based in New York, mix Colombian beats with American funk, jazz and hip hop. With roots in Barranquilla, Bogota, the Bronx and Savannah, GA, MAKU’s new album brings a powerful and honest sound that goes beyond borders.

Their new album, Mezcla, released in late May 2016 hones in on a tender rawness mixed with an overwhelming and powerful feeling. “Who’s gonna build a wall in the middle of the ocean?” shouts lead singer Liliana Conde in their introductory song, “Agua”. Drawing from their own experiences, MAKU created an experimental and politically charged album that you can dance to all night.

I got to catch up with Felipe Quiroz from MAKU who spoke to us on their new collaborative sound, travelling as a DACA recipient and connecting with refugee groups in Europe.

What does home mean to you and how does that connect with your art?

For me personally, I moved to NY when I was 15. I’m 29 now and basically half of my life is in NY. I haven’t been able to go back. I came with a tourist visa and stayed undocumented. I am a DACA recipient right now. So I haven’t been able to go back to Colombia in 14 years. It’s my home, in the back of my mind, its always in my heart. But now NY is physically still my home. It’s always part of me and my culture and inevitably expressed through my music. It’s a way of being home away from home. But also there’s a lot of music that I’ve been exposed to here, something I never would have heard if I was in Colombia. And that’s a beautiful thing, something we value a lot. It’s not all bad necessarily, the fact that we can be here and learn all these things here.

It’s the record we took the longest to make actually. In our past records we’d usually book studio time and rush to write material right up to the day we were supposed to record. We always recorded live, all together and no over-dubbing. But this one, we really took time to write music and also experiment. We did a lot of home recordings! We found a tech machine in a school yard sale. We basically went and recorded the whole album ourselves. We thought this worked and was cool. Then we started playing the songs live. And you know when you play the songs live it takes a whole other level. What is unique about this record compared to the other ones is that in our previous records the main ideas from our songs would come from one specific member. But this record I feel we wrote the songs together. They came from songs and jams when we were together in the studio rehearsing. It definitely has more of a collaborative and cohesive sound. Especially the horn lines. The horn player’s input is a lot greater than before. They came up with a lot of lines which makes a difference. Last year we were also able to travel to Europe for the first time. 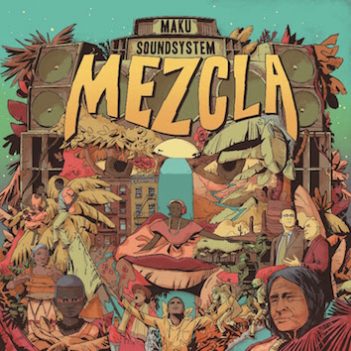 How was that experience for you?

As a DACA recipient I was granted a special permit by immigration services to go as an artist and come back. It was pretty amazing. It was so inspiring. When things seem impossible with rules, laws and regulations, something as simple as music can break those rules. Music basically has no borders you know? It was such a magical experience for me. I feel lucky and privileged, I know a lot of people are having a lot harder time being undocumented in this country. I feel extremely grateful.

Are there any tours for Mezcla?

We are going back to Europe next month! We are going to Germany again and in July it looks like we may go to Belgium. And it looks like we are going to the West Coast with some shows in California. We’ve been there a couple times but not in a while. We want to go to the Midwest like Chicago, Detroit, Milwaukee, tour in the fall. Just try to keep the music travelling. It’s hard honestly, it’s 8 of us! It’s a challenge to keep all of us moving but we try and keep growing. It’s our first record with a label. This time around we want to take it to the next level and reach a larger audience. Hopefully that can take the band to more places.

What is your favorite song to play live?

There are a couple that are special to me. I wrote one song called “Happy Hour”. It’s kind of like a crazy song. I like it because it’s simple. It talks about a guy who works a lot and has frustrations in life and kind of likes to drink a lot after work. He’s into the party life and FOMO life and keeps going. Every time he wakes up he’s like “what happened?” I’m not saying this happens in my life all the time (laughs).

But there’s also a song for me that is special. It’s called “De Barrio”. Our drummer Andres had the idea for it. His stepbrother actually made the journey from Guatemala to Texas by land. The song talks about a kid crossing the border in the desert in search of survival into the unknown. We wrote this song a couple years ago during the child migrant crisis. It’s such a touching subject especially us as immigrants. We feel so privileged that we have access to art, in NYC and access to DACA. It’s sad that hundreds of thousands of kids are in prison with their families. And all over the world. That was two years ago. And last year the whole refugee crisis in Europe started. When we went over there we met up with some groups of people that had underground networks, resistance helping refugees find homes and work. I was like, damn this is crazy. We felt connected but also privileged. Their strength is an inspiration for us.

Where will MAKU be in the next couple of years?

One of the dreams I have personally is to be able to go back to Colombia and play with MAKU. Like a full circle life experience. Also keep growing. We have so much music within us and hopefully people will like it!

Mezcla is available from glitterbeat.bandcamp.com/album/mezcla

Take a listen below to their single “Thank You, Thank You” below: