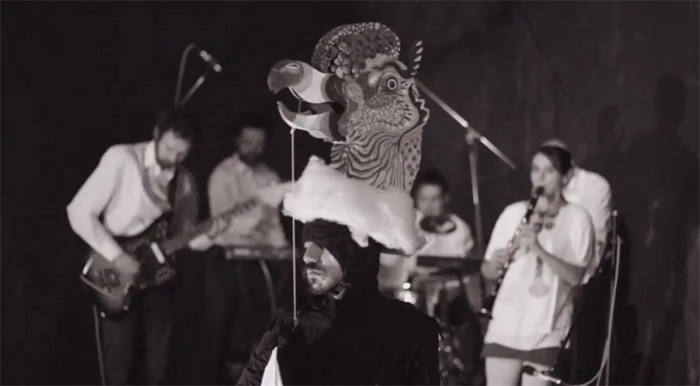 It’s a simple but surreal concept at the heart of Meridian Brothers‘ latest video. Devised by the group’s main man Eblis Álvarez, along with Bogotá-based artist Mateo Rivano, the video stars El Gran Pájaro De Los Andes (The Big Bird of The Andes), who is played by Pedro Ojeda (Frente Cumbiero, Los Pirañas, Romperayo, Ondatropica) and which also happens to be the name of the song.

‘The Big Bird’ chirps away to the track until getting harassed by a number of small birds and finally hitting the turf, to the seeming delight of everyone involved, including the band who finish up the track with ‘The Big Bird’ lifeless on the floor. Shot in black and white and directed by Camila Camacho it shows what can be done with a simple idea and a great song.

“El Gran Pájaro De Los Andes” is one of our favourite tracks off Meridian Brothers’ latest album Salvadora Robot. Check out the video below: