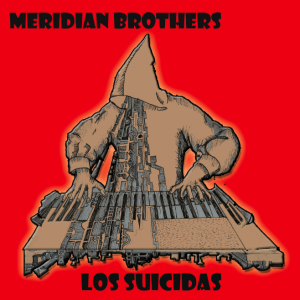 I must admit that this album had me non-plussed when I first heard it. It seemed almost wilfully obtuse. And this is from someone who knows that the Meridian Brothers don’t always pave the way for people to like their music with catchy pop tunes. Starting with Eblis Alvarez’s first outing as the Meridian Brothers in 2005, his passion for discovering the new has been an exciting adventure to follow. But this album felt like it wanted to take the audience even further. Somewhere that wasn’t so comfortable.

Labelled as the first in a trilogy, this album was triggered when Alvarez bought an LP by Jaime Llano Gonzalez – a Colombian local legend and Hammond organ star. Wanting to investigate this style further, he took the organ timbre and added bass pizzicato and some intense polyrhythms to develop what he calls “impossible organ music – a kind of un-easy listening”.

And in some ways you can’t argue with that description. But what the first listen of the album doesn’t take into account is the artistry of what he’s doing. It’s almost the natural continuation of what Alvarez set out to do when he first began the Meridian Brothers project: to experiment with alternative ways of playing instruments and electronic media.

But by focusing in on one particular instrument, one era, a singular style, it actually means that Alvarez can take you on even more of a journey. One that starts with the easy-listening homage aesthetic of the opening track, “Vertigo” before leading you towards more and more ear-opening territory and experimental highlights. These include “Delirio” which, like the name suggests, builds to a frenetic flourish before slowing to a spaced-out coda; the cascading melodies and Rawhide-a-like vocals of “Contienda” and the thoroughly strange final track “Amargura”, a track which stutter starts before letting you eavesdrop on a series of meandering melodic conversations.

The overall feeling is that Alvarez has delivered something more than just a collection of tracks; he’s delivered a heartfelt homage to that era – a genuine concept album.

Los Suicidas is available from Amazon UK, Amazon US and iTunes