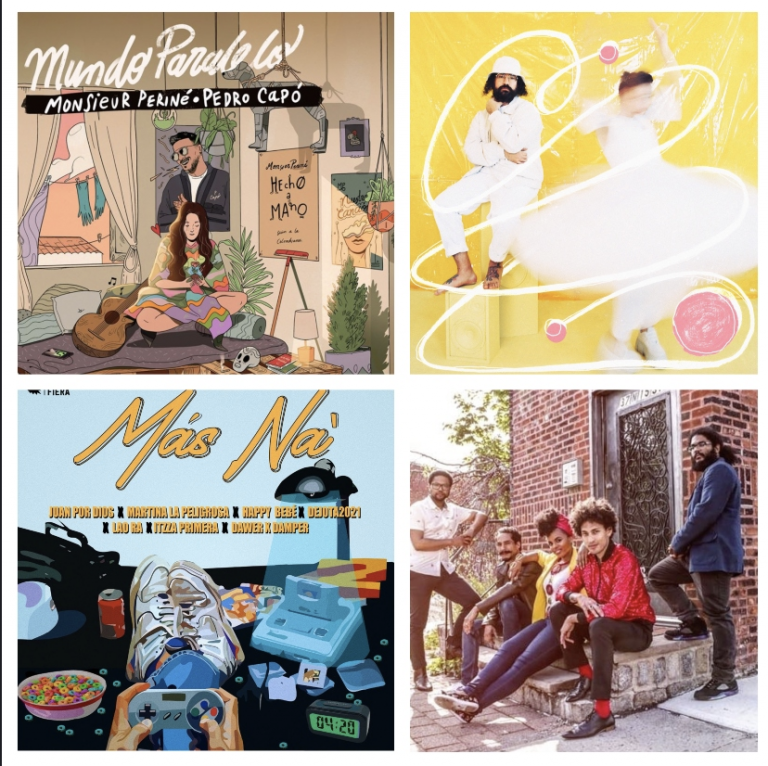 New music by Colombians you need to hear

Colombianos, whether they’re based in the South American country or abroad, are keeping us going during these Coronavirus times. Here are some new tunes you need to hear.

Over the past year, Monsieur Perine has been *claps hands* working. They’ve performed more than 70 shows in 15 countries including major festivals such as Austin City Limits, Bonnaroo and Rock in Rio. The Bogotá-based duo deserve this pause due to the pandemic. But this doesn’t mean we don’t get new music, as they’ve released the new single “Mundo Paralelo” featuring Puerto Rican singer Pedro Capó.

“This song was born as an ode to good vibes and the simple things. We wanted to sing about how beautiful it is to just breathe and be underneath the sun and the rain,” said lead singer Catalina Garcia. “Mundo Paralelo” is the first single since the band’s break-out GRAMMY-nominated album Encanto Tropical, produced by Eduardo Cabra. See the video here.

Salt Cathedral: ‘A Lifetime with You’

Do a happy dance because the dream pop New York City based duo Salt Cathedral have blessed us with their debut album, Carisma. The track “A Lifetime with You” opens the album with an unselfconscious declaration of love over a spirited rhythm that swells along with the vocal.

The duo is made up of Nico and Juli, who are originally from Bogotá, Colombia, and met in the United States while attending Berklee College of Music and began releasing a series of acclaimed EPs pushing against the pillars of indie rock and Latin music that attracted attention from music media outlets and fans around the world.

Listen to “A Lifetime with You” below.

It’s a new song that helps others when you stream it: “‘Más Na’ is a track put together by Bogotá-based producer JuanPorDios, who is one-half of Acido Pantera.

Juanpordios, who in his boredom created a weekly Friday night party called “La Perreandanga,” gathered his artist friends Martina La Peligrosa, Happy Bebé, Dawer x Damper (of Calí), Lao Ra, Itzá Primera and Dejota 2021, to come up with the song with proceeds going to the initiative Colombia Cuida A Colombia, which has already raised about 1,000,000,000 million Colombian pesos towards COVID-19 relief.

Stream it on Spotify to help those who need it most in these COVID times.

Sometimes a simple social media post is what it takes to brighten your day. Last month, Brooklyn-based Delsonido posted a video of their lead singer Salima Rah previewing their new track, “Color” along with a message: “We hope our new single brings some COLOR to these dark days. Stay healthy. Stay home.” That made us smile.

While the band boasts multicultural members, it is led by Barranquilleros Elkin Pautt and Ivan Garazábalo. Check out “Color” to brighten up your self-isolation.