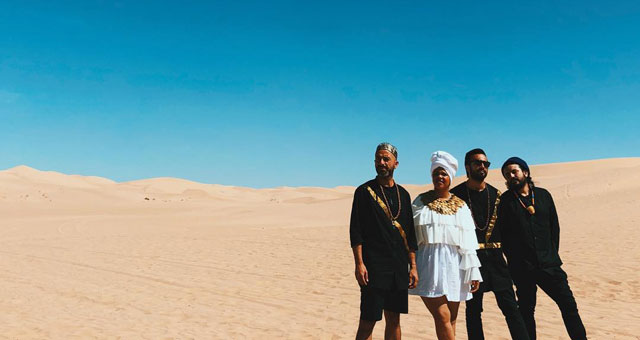 New music video: ‘Esto Es Real (8100mg)’ by Combo Chimbita, who will embark on tour in May

We’re parched after watching the mystical new video by New York City/Colombia’s Combo Chimbita, but with their tour kicking off on the 2nd of May in Connecticut, it’s best to get acquainted with their new music.

“Esto Es Real (8100mg)” is a slow-tempo delight, solidly psychedelic and powerful with its lyrics, which are the norm from lead singer Carolina Oliveros:

“Mírame bien. No mentiré lo que siento me hace más fuerte.” (Look at me well. I will not lie what I feel makes me stronger.)

Recently back from Austin, Texas, where they drew raves from the likes of NPR, Noisey (VICE), and the Daily Beast, the visionary quartet is ready to unearth the awareness of Ahomale (pre-order here), their forthcoming sophomore album and first for ANTI- Records. With the help of producer Daniel Schlett (The War on Drugs, Modest Mouse), the group’s rootsy experimental alchemy and metal strangeness take centerfold.

The band, which is rounded out by Prince of Queens (synth/basee), Niño Lento (guitar), and Dilemastronauta (drums), the tropical futurists were obviously drawing inspiration from several places.

“Ahomale resurges from the visions that we’ve been having via our music and life, and the lyrics reflect a manifestation passed on through our ancestors and the gods,” Oliveros says. “I wanted the album to convey the search for spiritual awareness, which ultimately serves as a revelation.”

Watch the new video for Ahomale’s second single “Esto Es Real (8100mg),” shot in a desert somewhere in the Southwestern part of the United States, below, and see tour dates as well.