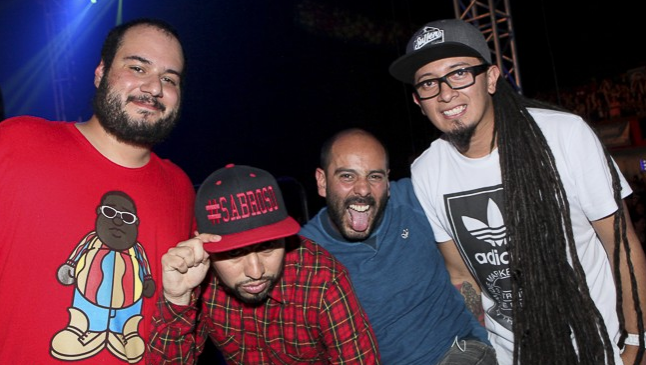 It dawned on me recently that I’ll never know what it’s like to make a stadium full of people dance. Thankfully, a new video by our friends, El Freaky Colectivo, is akin to front-row *and* on-stage access while they make the stadium #turnup, as the kids say these days.

The video is for their new track, “El Freaky Sound,” and most of the footage was shot in Barranquilla, Colombia, during Carnival. Freaky crew member, Andres Shaq, tells me the video also features footage from the quartets’ various opening sets for concerts by Justin Bieber, Major Lazer, Shaggy, Tego Calderon, One Direction, and Calle 13. No wonder there are so many girls in those stadium shots!

The track is a collaboration between Colombia and Jamaica, as the vocals come from dancehall artists, Supa Hype and Tanto Blacks, and the beat comes courtesy of Colombian producer, Benny B. The video premiered via Colombian publication, Shock, complete with a Q&A with El Freaky. My favorite part is when the interviewer mentions that, in Colombia, the DJ has never quite been the central act of a show. So how did El Freaky get center stage? I do my best at translating their response here:

“At first no one in Colombia understood our music. Not concert promoters, or the press, let alone the radio. That’s why we realized we had to become producers of our own festivals and concerts. When they saw that it worked, and that attracted people, they wanted to know what it was all about. The fact that we produce all of our sets and provide not just a ‘DJ set,’ but a concept of sonic experimentation that includes tons of visuals, makes it so El Freaky is a complete experience.”

An experience and one hell of a party as you’ll see in the video for the aptly named “El Freaky Sound.” (A personal favorite part for me is :42 into the video, when Freaky visual artist, Sebastián ‘Fat Sugardaddy,’ gets wild with beach balls. Ever the rock star, that one!) Watch the video below and pretend you’re shaking your hips at the stadium in Barranquilla! Also check out this mix celebrating their fifth anniversary as a collective.